With all of the goings-on with the COVID-19 pandemic and the stay-at-orders across the nation and the globe, it seems like there’s nothing else of importance happening. Every major news outlet is littered with coronavirus discussions, theories, speculation, etc. while there’s almost no mention of another important event. Today, April 22nd, 2020, is the 50th anniversary of the environmental movement known as Earth Day. In these crazy times, it’s understandable for a lot of things to take a backseat to a worldwide pandemic. Though, that doesn’t stop plenty of news websites from updating visitors on NFL tight end Rob Gronkowski’s reunion with former New England Patriots teammate Tom Brady to play in Tampa Bay this upcoming season. In a nutshell, this is exactly the reason why activist media like Brian Ryu and Troy Enoka’s short documentary, Planting Earth Week, needs to exist.

The short follows a New York City radical activist named Karlos Edmonds. Arrested a dozen times last year for various protests, Edmonds intends to make his biggest statement on May 1st, 2020. He plans a mass gathering to illegally plant trees in Central Park for the 50th anniversary of Earth Day. The documentary begins in October 2019 when Edmonds makes the announcement and chronicles the next few months as he gains followers and continuously advocates change in various ways. However, the pandemic alters his plans and causes Edmonds to find new ways to spread his message. This time, in a non-radical way.

Environmental activism is a very touchy subject. For some, it’s the only thing that matters while others are indifferent. For the sake of this review, we’re going to approach the subject matter with a completely neutral and unbiased outlook. First and foremost, Planting Earth Week is very effective as a documentary. It’s a passionate tale about something that should be taken seriously. As previously mentioned, it almost feels like an afterthought in the media on its 50th anniversary of all things. Seeing this film will make you feel like there’s something you should be doing to help the environment. It’s not a fight that can be won simply by a gathering of people planting trees in one location despite how symbolic it may have been. 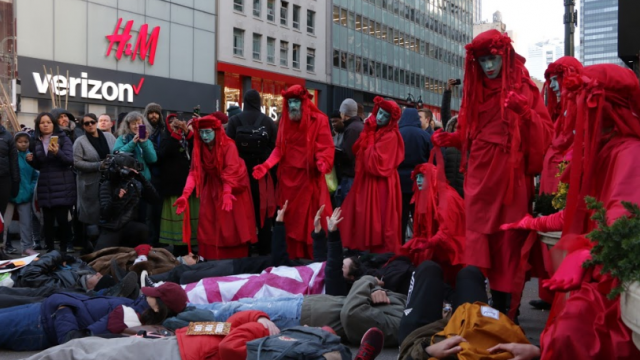 For this, producers Troy Enoka and Brian Ryu, deserve a lot of credit. In our correspondence, Ryu stated that they took a cinéma vérité approach by filming Edmonds’ illegal actions and his real, unaltered interactions with others. The footage is all well crafted and assembled with great shots and camerawork throughout. The editing is spot on as the film chronicles months of Edmonds’ life in the span of only thirteen minutes. The story moves at a brisk pace as it moves quickly from event to event. Support builds rapidly for the planned movement on May 1st as non-violent protests cause disruption in New York City. Things get a bit more chaotic as police become more and more involved and the threat of violent outbursts sometimes feels imminent. Thankfully though, things never escalate to that point. Enoka and Ryu do a great job building Edmonds’ story as a positive one that’s mired in controversy and tension.

That brings us to Karlos Edmonds himself. Like environmental activism can sometimes be in general, Edmonds is a polarizing figure. He fights for change with the idea of saving the Earth for future generations, including his son, Aman, which is certainly an admirable cause. However, you’re never really sure what he wants to be done to promote change. As one levelheaded citizen explains at one point, what Edmonds and his followers are doing is angering the wrong people. They often affect the other blue collar, hardworking citizens as opposed to the people at the top who they appear to be targeting. Fellow activist Ellisif Wasmuth does have a sensible response as they’ve continuously failed at getting the attention of the government and large corporations. This is always going to be the issue with environmental activism as there are people that will simply choose not to acknowledge it. It’s especially true when money and power come into question. On one hand, you can understand the radical approach taken by Edmonds and others like Wasmuth. Though, it can also backfire and leave you with no allies if you’re just irritating everyday citizens. 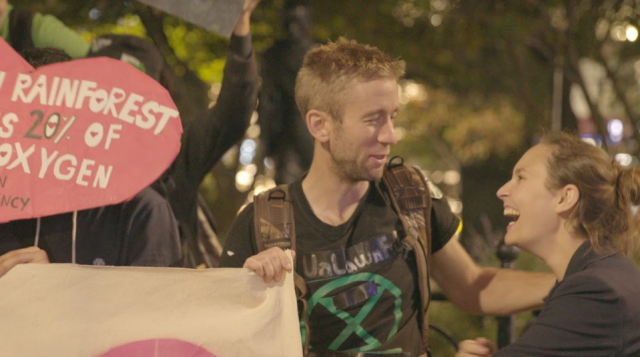 Perhaps the best thing about Planting Earth Week is that a potential negative becomes a positive by the film’s end. Again, as a completely neutral spectator, Edmonds’ original idea of illegally planting trees in Central Park was a risky venture at best. In all likelihood, it may have gotten shut down almost as soon as it began and caused a ton of issues with local law enforcement. With the COVID-19 outbreak, Edmonds had to pivot and, in doing so, came up with a much less radical and more positive demonstration of advocacy. By encouraging others to plant trees at their homes, neighborhood gardens, and the like, Earth Day went digital. In these uncertain times, it’s a perfect way to promote Earth Day and Week as people are actually spending more time at home and many want to do something constructive with their time.

Even though it’s understandable to question some of the tactics and intentions of the advocates in this documentary, Planting Earth Week still opens up a lot of reasonable discussion. The Earth is important and the fact that people are willing to sacrifice aspects of their lives to save it is a testament to that. It’s too bad that mainstream media, which has the ability to really promote something good, often goes a different direction. While the voice of one person is unlikely to affect the masses, it’s encouraging that there are people like Karlos Edmonds who at least try. Hopefully going forward, he’ll continue to spread his message in positive and constructive ways. With the help of people like Brian Ryu and Troy Enoka and their work on Planting Earth Week, there’s also a much better chance that those voices are heard.