With Captain America: Civil War set for release in less than two weeks, we check out the Cap’s past, present, and future in this month’s State of the Franchise…

On May 6th, Phase Three of the Marvel Cinematic Universe kicks off with the release of Captain America: Civil War. The film is going to be the thirteenth of the MCU and the stakes are being raised as the Avengers show cracks in their foundation. Civil War will feature Steve Rogers/Captain America facing off against Tony Stark/Iron Man over whether the Avengers should be regulated by the government.

As we wait for the new film’s release to see how these issues play out, let’s take a look at how Captain America’s cinematic journey has arrived at its current position. For the sake of this feature, the Captain America-proper films will be the focus. The Avengers and Avengers: Age of Ultron are being considered as offshoots of Cap’s own franchise.

Captain America’s time on the silver screen has actually been pretty successful overall. There was a 1944 film serial with District Attorney Grant Gardner under the moniker as opposed to Steve Rogers. Cap’s first true feature length debut came during 1990’s Captain America. The film was supposed to release theatrically but due to many delays, it ended up being a direct-to-video release finally in 1992 and was universally panned by critics and fans alike. The special effects and costumes were cheap and the characters just weren’t likable. 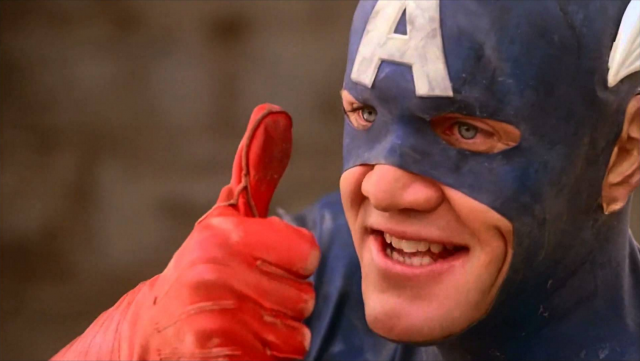 Luckily for fans of Captain America, the character’s next foray onto the big screen was 2011’s Captain America: The First Avenger. Directed by Joe Johnston, the film was more or less a well done version of the 1990 film. This was the first appearance of Cap in the official MCU and was mostly a straightforward origin story. It was safe to wonder how Captain America (a character created in 1941 that was basically a walking piece of American propaganda) would be portrayed in this new adaptation. As it turned out, the filmmakers actually embraced the dated qualities of the character. Cap is used as a symbol for nationalism by promoting war bonds and punching out Adolf Hitler on stage nightly before he becomes a full blown superhero. Even the action scenes in the film are stylized to the point they could be actual World War II propaganda posters.

Chris Evans portrays the patriotic hero in the MCU and he is perfect for the role. He has just the right amount of seriousness to honor the character as well as the right amount of silliness to poke fun at some of the antiquated qualities of him. After getting a shot to play Johnny Storm in 2005’s brutally average (at best) Fantastic Four, Evans totally redeemed himself as Captain America. He’s believable in the role, he looks the part, and he’s pretty charismatic as well. 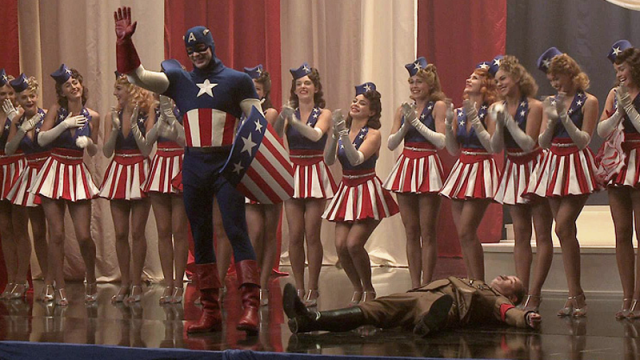 After returning to the role in The Avengers, which proved to be massively successful, Evans got a second standalone film in Captain America: The Winter Soldier which was directed by Anthony and Joe Russo. Taking place in the modern day as opposed to World War II in his first go-round, The Winter Soldier took a much more serious approach to the character. The subject matter is a little darker with Captain America becoming a fugitive of S.H.I.E.L.D. after Nick Fury (Samuel L. Jackson) is attacked by the mysterious Winter Soldier, who also has a history with Cap.

The action scenes are also more realistic looking this time around (if a bit too shaky and jumpy) which works well for the continuing story. The Winter Soldier makes The First Avenger almost seem more like a myth or a tall tale due to the different time periods of each respective movie. It’s as if the latter film was an interpretation of how someone would relay Cap’s past to another person instead of a direct, realistic interpretation of it. Cap gets to sport a new suit this time around which is less blatantly patriotic and fits seamlessly into the modern day. We learn a little more about Steve Rogers’ morals and how his idea of freedom is not to live through fear which, again, acknowledges how the 21st century has been perceived thus far.

This isn’t to say that there isn’t any fun in The Winter Soldier either. Perhaps the best part of the film is the relationship that builds between Captain America and Black Widow (Scarlett Johansson). Their back and forth banter has heart to it and they work well as a team. Black Widow has such a playful smugness to her character and she frequently directs her quips at Cap (i.e. “Where did Captain America learn how to steal a car?”) Evans and Johansson show that they have a lot of chemistry together and it’s too bad that this wasn’t further explored in Avengers: Age of Ultron. 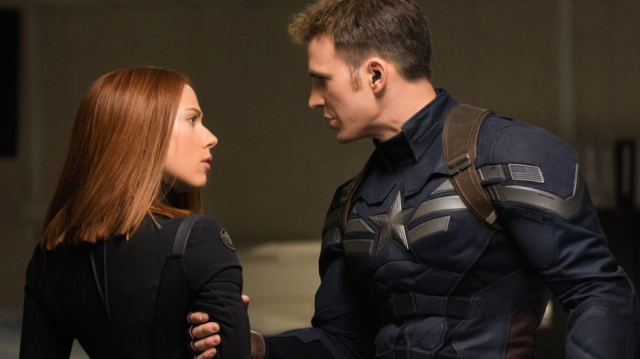 So, what is the future of Captain America from here? He fought Nazis in The First Avenger. He battled the corrupt S.H.I.E.L.D. members in The Winter Soldier. Not to mention, he helped save the world twice as a member of the Avengers. Now, in Civil War, he’s going up against his friends in a battle of ideals. It is somewhat odd that this story will be considered a Captain America movie as opposed to the third Avengers movie. It’s going to feature all previous Avengers members along with some new ones (Black Panther and Spider-Man) so why isn’t it an Avengers film? As Phase Three of the MCU commences, there will most likely be less disparity between the standalone titles as Marvel works its way towards its climax with Avengers: Infinity War – Parts 1 and 2. In Phase Three, it seems that anyone and everyone can show up in each of the ten films scheduled for release over the next four years.

Captain America: Civil War is going to be a crucial film in the MCU. More often than not, these superhero franchises try to go too big too often and receive a massive blowback from fans and critics. Batman & Robin, X-Men: The Last Stand, Spider-Man 3, and The Amazing Spider-Man 2 have each essentially crippled their respective franchises with too many characters, bloated plotlines, and simply bad decisions. Civil War could certainly suffer the same fate if Marvel doesn’t execute properly. Thus far, they have played their cards right even when adding in more and more characters. Marvel has been masterfully creating this massive universe that audiences have been eating up. As long as they continue to take care of their intellectual property and produce quality portrayals of characters that people love, Captain America: Civil War will certainly be a huge hit as will the rest of the upcoming films in the Marvel Cinematic Universe.