Is it that time again already? It’s shocking to think that it has been a little over a year since we’ve discussed The Walking Dead in depth. Last year, we weren’t sure if we were even going to watching this new season but here we are. For anyone that may have thought that they were going to get a return-to-form type of season, you’re simply delusional. The Walking Dead Season 8 stays the course of the past few seasons and delivers another forgettable season of the zombie apocalypse. Though, there are some brief moments sprinkled in here and there that spark minor intrigue.

Let’s start this off with a brief, personal story about watching this season. I couldn’t bring myself to watch The Walking Dead Season 8 on a weekly basis. The episodes piled up as I knowingly ignored the show’s existence. Finally, I begrudgingly decided it was time to get caught up. After I began watching, I had a discussion with someone who was a little farther ahead than me about the lesser points of the show. I told him that I had yet to watch the mid-season finale to which the person I was talking to said that he couldn’t remember what even happened. Later that night, as I resumed watching, I discovered that I actually had watched the episode but everything was so anti-climactic that I actually forgot I watched it. That’s essentially a metaphor for the past few seasons of The Walking Dead.

One of the biggest problems with the show in general is in its layout. They constantly stagger interesting ideas with the blandest of the bland. In one of the best episodes of the season, Rick Grimes (Andrew Lincoln) and the villainous (kind of?) Negan (Jeffrey Dean Morgan) are having a showdown in a basement crawling with walkers. They don’t see one another but they have an intense conversation as they seek each other out. Right as you’re getting enthralled in the storytelling here, they cut away to some random new female character, Georgie (Jayne Atkinson), who is trying to provide information to Maggie (Lauren Cohan) and the survivors at the Hilltop.

This is another one of those problems that The Walking Dead has had for a long time. In our wrap-up of Season 7, we discussed how the excellent season premiere was followed by an absolute nothing episode that killed all of the momentum. The only thing you can think of is that the show is trying to be like Game of Thrones. It has a large cast with multiple main characters. At this point in the series, the characters have branched off to different locations and there’s one overarching story that unites all of them. The problem is that Game of Thrones knows how to balance all of their subplots. Meanwhile, The Walking Dead doesn’t really have any subplot that their viewers actually care about. Hell, they don’t even have a main story that most people care about at this point. 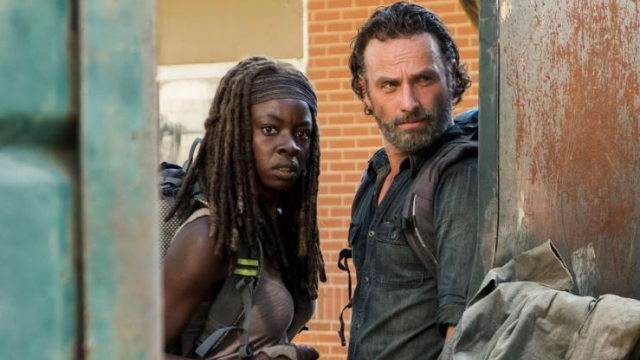 As usual, The Walking Dead Season 8 is up to the same old tricks in regards to its characters. The characters you knew and loved in seasons past are dead and gone at this point. Now, they all feel like similar variations of one another. They all have the same internal struggles for some reason and there’s no consistency to any of their actions. Remember when Morgan (Lennie James) refused to kill the living? How about when Carol (Melissa McBride) was burning people to death and murdering children? Michonne (Danai Gurira) used to be kind of a bad ass slicing up enemies with her samurai sword. Well, all those characteristics are gone now as Morgan is addicted to killing, Carol doesn’t want to kill anymore, and Michonne has resorted to being a weepy housewife. Oh wait, Carol still slaughters a whole bunch of people this season anyway? Whatever.

Rick Grimes is still around so there must be some interesting things happening with him right? Well, sometimes. It’s hard to say that that’s attributed to his character though. By far, the most interesting character in The Walking Dead Season 8 is still Jeffrey Dean Morgan’s Negan. Like last season, if there’s anything to praise about Season 8, it’s him. He’s still absolutely electric every time he’s onscreen and, wouldn’t you know it, they actually added some depth to his character as well. During one episode, him and Gabriel (Seth Gilliam) end up trapped in a trailer surrounded by walkers. He divulge some of his background to Gabriel and, later, to Jadis (Pollyanna McIntosh) as she holds him hostage. He even shows a bit of remorse for the death of a character which we’ll get to in a bit. Dare we say it that Negan actually feels kind of like the protagonist more than once throughout Season 8 while Rick has turned into the antagonist. While that’s an interesting story arc, it still doesn’t seem like that’s what the showrunners were going for. Rick is evidently still the “good guy” in their eyes. 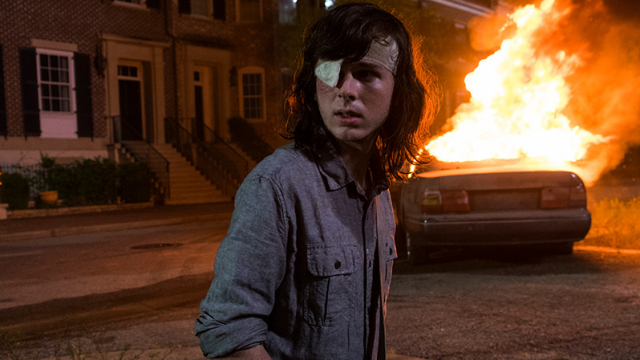 Here’s where we’re going to delve into some spoiler territory. Of course, you can’t go through a full season without at least someone dying and longtime fans were actually rewarded for their patience this season. Even though they’re about four seasons too late, The Walking Dead Season 8 marked the death of Rick’s son, Carl (Chandler Riggs). There’s no doubt that Carl was one of the most hated characters on the show for a long time. Though, he has gotten a little better in recent seasons compared to some of the earlier ones. While it was nice to finally see Carl go, surprisingly, the show handled his death really well. They actually made it feel important. Carl is bitten by a walker after saving another character and he hides it until the opportune moment in the mid-season finale. He urges his dad to make peace and change the world they’re living in. Rick intends to do so… after quenching his bloodthirst until the season finale.

What else is there to say about The Walking Dead Season 8. For every cool and/or interesting moment, there are so many others to simply loathe. The battle at Hilltop in episode 13 is laughably bad as Negan’s Saviors huddle up so the survivors can shoot them like fish in a barrel. Daryl (Norman Reedus) actually speaks more than two lines in this season so that’s something. Although, his fist fight with Rick was mostly unwarranted and pointless. The only thing that holds this season together is Negan. Whether it’s his battle of wits with Rick or his *gasp* endearing character development (!), he’s the best thing going in the show since he debuted.

Unfortunately, the series has reestablished its status quo with the end of Season 8. Sure, an internal struggle was teased but does anyone really care? The show has to be on its final legs by now. Viewership is dropping and interest just isn’t there the way it used to be. They’re even changing showrunners from Scott Gimple to longtime producer, Angela Kang. Although, Gimple is actually being promoted to Chief Content Officer. With The Walking Dead Season 8, the show remains in familiar territory and also toes the line of being borderline ludicrous at times. At this point, the show needs a mercy killing as the charade has gone on far too long. Yeah, there are some decent moments but, with sixteen episodes of content every season, that’s no surprise. If you fell off The Walking Dead wagon before, there’s definitely nothing about Season 8 that’ll bring you back.