Just as we’ve done in previous years here on Cinema Smack, we’re bringing back In Case You Missed It Reviews for the entire month of October! Normally, we focus on films that may have flown under the radar or older films that people should revisit. This October, there will also be a theme: horror remakes! There will be one new ICYMI Review each week covering a quality update of a classic horror film. For our first week, we cover Werner Herzog’s 1979 film, Nosferatu the Vampyre.

Herzog’s film is a remake of F.W. Murnau’s 1922 German expressionist film, Nosferatu. Though, most viewers will recognize the story as an adaptation of Bram Stoker’s 1897 novel, Dracula. Murnau’s Nosferatu was an unauthorized adaptation of the novel as Stoker’s estate hadn’t granted him permission to use the source material. The names of characters were changed but the main story pretty much followed the classic Dracula formula. Stoker’s estate actually sued the production company, Prana Film, for copyright infringement and won. While this put Prana out of business, prints of the film survived despite many being burned and Nosferatu continues to live on today. By the time Werner Herzog set out to pay homage to the silent classic, the copyright of Dracula had become public domain and the names of characters from the novel could be used in this remake.

The film opens with real estate agent Jonathan Harker (Bruno Ganz) being tasked by his boss, Renfield (Roland Topor), to close a deal for a property. Harker travels to the castle of Count Dracula (Klaus Kinski) in Transylvania. Though, Harker has much difficulty getting there as his transport and nearby townspeople refuse to travel there. Nonetheless, he makes it to the castle where Dracula appears erratic at times and Harker notices some very strange goings-on. Dracula sees Harker’s photo of his lady love, Lucy (Isabelle Adjani), and immediately agrees to purchase the property in Wismar, Germany. With Harker seemingly trapped in the castle, Dracula boards a ship traveling to Wismar in the middle of the night while Lucy begins suffering from night terrors.

If you’ve ever read Dracula or seen literally any film or television adaptation of it, the story will already be familiar to you. It hits all the same beats that fans have come to expect from adaptations based on the Stoker novel. Even the script brings to mind the 1931 Universal Studios classic starring Bela Lugosi and even the later stylized 1992 film from Francis Ford Coppola. When the source material is so iconic itself, it seems that there isn’t much need for any major changes to the story. Herzog’s film definitely follows this as well. 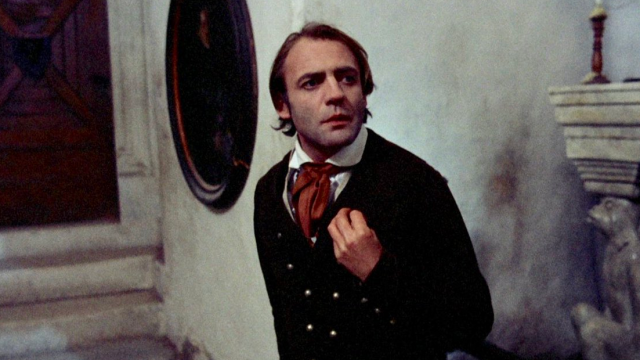 Even though the names have been changed back to match the novel, Nosferatu the Vampyre definitely feels more in tune with the Murnau film than the other interpretations. Aesthetically, Herzog and company do their best to maintain the look and feel of the 1922 original. From the German city of Wismar to the eerie Transylvanian castle, the locations look as if they could be the bigger budget version of the silent film. The film uses a ton of shadow to emulate some of the bigger moments of Nosferatu. The costuming also appears similar and, of course, the film does a great job matching the appearance of its Count Dracula with that of Nosferatu’s Count Orlok.

Speaking of Dracula, Klaus Kinski is what makes Nosferatu the Vampyre work. Like Bela Lugosi in the 1931 Dracula, Kinski’s performance defines the film and its legacy. Admittedly, the film is quite slow at times. Yet, every time Kinski is onscreen, you’re immediately drawn to him. His performance is deliberate and hypnotizing. If there’s any reason to check out Nosferatu the Vampyre, Kinski is it. He’s given the rat-like appearance that made Max Schreck’s Count Orlok so iconic and disturbing. Many versions of the character, including Lugosi and Christopher Lee’s Dracula from the 1950’s Hammer Horror films, go with an aristocratic appearance. While this is definitely the more classic and identifiable look for the character in popular culture, the Nosferatu style is much more eerie and effective. Being able to entrance his victims even while being so hideous is an example of the power that Dracula possesses and makes him an even more formidable foe. 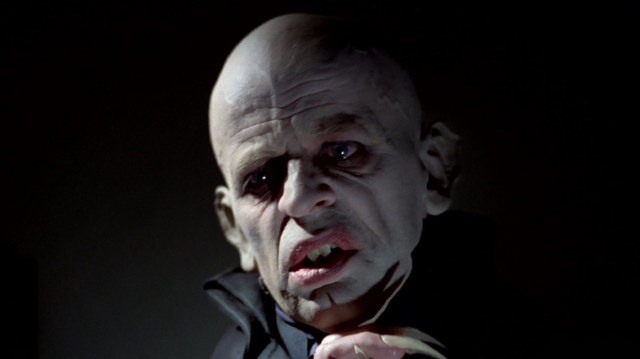 As previously mentioned, Nosferatu the Vampyre is a bit slow overall but this is nothing new for Dracula inspired films in general. Lugosi’s Dracula was only 75 minutes and even that film felt too long. At 107 minutes, Nosferatu the Vampyre isn’t the longest Dracula film ever but it does drag. It feels like it takes forever for Jonathan Harker to get to the castle. Then, in between scenes with Kinski, there just isn’t a lot going on. Yes, the characters are feeling Dracula’s influence but, visually, there’s not much happening. Again, this is a problem that spans almost every interpretation of the story and not just Herzog’s film. Seemingly, one of the only films to avoid this is Coppola’s 1992 version which clocks in at 128 minutes but is so wild and insane at times that it doesn’t feel its length. Fans will also notice that Dr. Van Helsing (Walter Ladengast) does make an appearance in this film. Though, he’s not really the Van Helsing that you’d expect. His role is extremely minor and he’s not the enemy to Dracula as he normally is in other versions. The last complaint about Nosferatu the Vampyre is that this film’s Renfield is very annoying and far inferior to those played by Dwight Frye and Tom Waits in other Dracula films.

Overall, Nosferatu the Vampyre is a very faithful and solid adaptation of 1922’s Nosferatu. It’s curious that the film takes the Nosferatu name but changes all the character names to the ones used in the Bram Stoker novel. If this were done for marketability, you’d think that they would’ve used the Dracula name in the film’s title and not just change the names in the story. Of course, this wouldn’t be the last time Nosferatu popped up as Shadow of the Vampire, the fictional recounting of the 1922 film’s production, would be chronicled in 2000. Regardless, Herzog’s Nosferatu the Vampyre is a good Dracula tale and a nice update on a historically significant cult classic. For those looking for a different interpretation on the Dracula character, give this one a shot.