Here in 2019, audiences all know what to expect from a comic book movie. Colorful characters, witty one liners, some cool villains, and a few jokes thrown in for good measure pretty much define this style of film. For the past decade plus, Marvel has been the gold standard but DC has slowly tried to catch up. After a few early bumps in the road, they’ve been seemingly on track with their solid work on Wonder Woman, Shazam!, and Aquaman. After the success of these films, their next would surely be a reinvention of Batman or Superman, right? Wrong. Somehow Batman’s arch nemesis, the Joker, landed a movie that no one asked for and nobody wanted. However, the aptly titled film, Joker, directed by Todd Phillips, is DC’s best work since The Dark Knight. Its deep dive into the dark recesses of a psychotic mind may even make it the most potent film based on a comic book character ever.

Before delving into the film, let’s cover a little backstory for the Clown Prince of Crime. The character was created by Bill Finger, Bob Kane, and Jerry Ferguson and made his first appearance in the debut issue of the Batman comic book in 1940. Though, there have been numerous origin stories explored for the character, there’s no one definitive explanation as to who the Joker is or where he came from. Because of this, he has been Batman’s greatest and most troubling foe hands down. Trying to cover nearly 80 years of printed history in a paragraph would be doing a disservice. Just do yourself a favor and check out stories like The Man Who Laughs, The Killing Joke, and Death of the Family for some great Joker-centric comics.

When it comes to film and television, there have been a number of different interpretations. Big name actors like Cesar Romero, Jack Nicholson, , and Heath Ledger have given fantastic live action performances as the character. Ledger even nabbed a posthumous Academy Award for Best Supporting Actor for his portrayal. Then, there are the animated versions of the Joker with Mark Hamill being the most synonymous for his work on Batman: The Animated Series and the recent Arkham series of video games. Again, with so much history, there have been many great Joker moments. Both Tim Burton’s 1989 film, Batman, and Christopher Nolan’s The Dark Knight from 2008 are absolutely essential viewing along with The Animated Series.

2019’s Joker opens in 1981 with Arthur Fleck (Joaquin Phoenix) as a clown-for-hire and aspiring stand-up comedian in a crime ridden Gotham City. Here, Arthur takes care and lives with his mother, Penny (Frances Conroy), in a rundown apartment and strikes up a relationship with his neighbor, Sophie (Zazie Beetz). He also has weekly visits with a social worker who medicates him for a mental illness which gives him bouts of uncontrollable laughter. While working as a clown, Arthur is assaulted by a group of teenagers which puts him in hot water at work and he’s eventually fired from his job. His relationships become strained and thus begins Arthur’s descent into madness. Being downtrodden by society and dealing with a city on the brink of a riot, Arthur’s inevitable transformation into the Joker is set into motion. 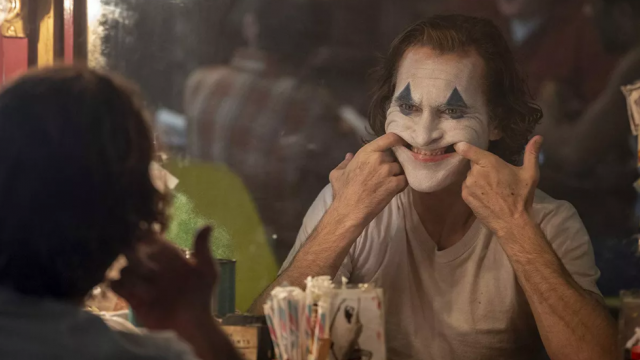 On paper, the film is a bit light on plot. In the case of Joker, this isn’t a bad thing whatsoever. This is not your typical comic book movie. It’s a character study disguised as a horrifically dramatic thriller. The film is entirely built on the character of Arthur Fleck and his relationships (or lack thereof) with those around him. Arthur’s relationship with his mother is the foundation of his world. He really seems to strive for who she wants him to be. Yet, seemingly every other person in Gotham City wants to see him fail. His coworkers find him strange, people on the street physically assault him, and his own social worker has little interest in his life. Whereas something like The Killing Joke explores how a person can go mad because of one bad day, Joker focuses on an entire lifetime of ridicule. There’s also a subplot involving Penny attempting to contact Thomas Wayne (Brett Cullen) for help which highlights struggles between social classes.

What really makes this film tick is Joaquin Phoenix as Arthur/the Joker. Like Heath Ledger before him, Phoenix finds a way to reinvent the character but also stay true to who and what the Joker is. His mannerisms, which include spontaneous dancing and bouts of showmanship, are eerie to watch but impossible to ignore. The iconic Joker laugh is reimagined as an uncontrollable tic. Phoenix goes from maniacal laughter to complete silence in a heartbeat. It’s unsettling to watch and hear as he laughs so hard that it seems to physically hurt him at times. Phoenix is nearly skeletal in this role which enhances his creepiness. As Arthur slowly becomes the Joker, you see him find comfort in his lunacy and really discover who he is beneath the skin. When Phoenix is in full Joker costume, he commands your attention and it’s really a thing of vile beauty for fans of the character. The rest of the cast does a very solid job, especially Conroy and Robert De Niro as talk show host Murray Franklin. Make no mistakes about it though, this is the Joaquin Phoenix show. The one character that isn’t as fleshed out as one would like is Zazie Beetz as Sophie. However, there’s a legitimate reason for it and all’s forgiven upon the reveal.

Now, there has been a lot of controversy over the release of this film due to its depictions of violence. While it certainly isn’t the most violent film ever made and it doesn’t even feature a huge body count, the violence is very realistic. Films like Deadpool and John Wick rack up body counts and have tons of bloody, violent fun. In this regard, Joker does not use death and gore for entertainment. In this world, death is grim, dark, and depraved. Needless to say, this film isn’t for children. As many deduced from the trailers, Joker borrows very heavily from films like Taxi Driver and The King of Comedy. Considering the depictions of violence, Taxi Driver is probably the biggest influence with visual references even being included in the film. Despite the backlash Joker has received, this level of brutality has definitely been seen in the past. It just hasn’t been seen recently or in a comic book movie. 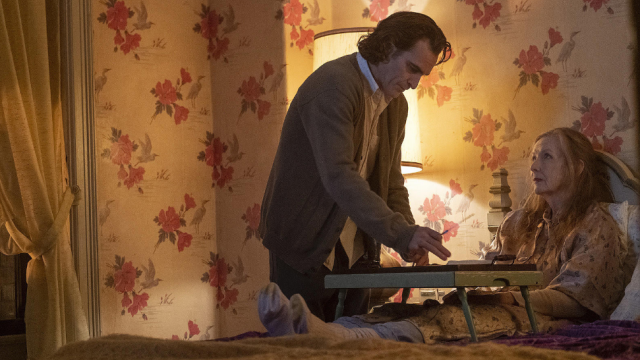 The negatives of the film are few and far between but there are definitely a few nitpicks. For some, Joker will feel quite slow in places. However, in most situations, the film is building to something and exploring more of the main character. In contrast, a film like Ad Astra has a lot of slow moments but very little payoff and no emotional connection to the characters. The slow moments in Joker are all about building character. Another issue is with the film’s soundtrack. The original score from Hildur Guðnadóttir is exceptional but some of the popular music used sometimes seems out of place. The most jarring examples are Gary Glitter’s “Rock and Roll (Part 2)” and Cream’s “White Room.” They just don’t seem to fit in with the other music in the film. Then, there are the continuity issues between Joker and other Joker/Batman stories. This one’s going to get brushed under the rug, though, as this film feels like its own standalone experience. It doesn’t seem to follow a timeline from any other story or medium. Therefore, we won’t count continuity against it but it definitely may irritate some people.

Joker is a slow burn of a film that constantly crescendos, plateaus, and then crescendos once again. It emotionally and mentally batters the senses of not only its own character but its viewers as well. There are so many pulse pounding moments where viewers can see the Joker break through the surface of Arthur Fleck. Yet, the transformation never fully comes until a single defining moment. For fans of the comics, there are countless moments that scream classic Joker. For newcomers, the downward spiral that Arthur is on should be plenty to make you buy into him becoming this villain. That being said, this is a hard film to necessarily recommend to someone. One person isn’t going to take the same things away from it that another might. It’s truly a polarizing experience that many will love but equally as many will probably hate. 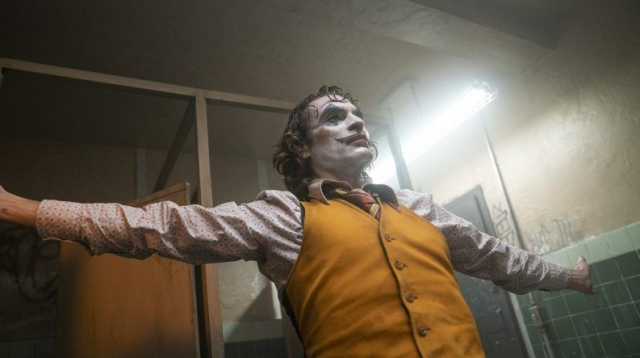 To be frank, Joker is a film that I initially didn’t want. The character is one that has never had a definitive backstory in comics even though there are numerous interpretations. To see an entire movie dedicated to the Clown Prince of Crime seemed like overkill. The Joker is almost always at his best when he seems to just pop up. However, after seeing the direction the film was taking and the tone it established within the trailers, anticipation skyrocketed. This was a film that I wanted to like. No. It was a film I wanted to love. Where other films like Once Upon a Time… in Hollywood and It Chapter Two disappointed greatly, Joker refused to go the same route.

It’s astonishing that a film like this was even made in 2019. This isn’t a comic book movie. It’s a 1970’s infused auteurist character study. Is it the best film of 2019 so far? You’re damn right it is. When you first leave the theater, you may find yourself having trouble wrapping your head around what you’ve seen. Though, there’s no doubt that Joker is going to stick with you long after its credits roll whether you like it or not.

One Thought to “In Theaters Review: Joker”