Well, the day has finally come. We’ve been waiting a long time for this one (even before the official announcement that the movie was being made) and there’s definitely a lot to discuss. The first theatrical version of one of Stephen King’s most popular novels has made its way to the big screen. It opened in theaters this weekend and is raking in some big bucks at the box office. In fact, It is currently ranked third in 2017 Thursday night preview opening totals behind only Guardians of the Galaxy Vol. 2 and Beauty and the Beast. Needless to say, that’s impressive for a horror movie. With that being said, does the film meet expectations in terms of quality? Well, yes and no.

Before jumping into the plot, let’s talk about previous incarnations of the story. King’s original 1,100+ page novel was released in 1986. It’s a brutal, vulgar, and sometimes promiscuous foray into the lives of seven people being terrorized by an evil entity. First, they encounter the entity, which can change its appearance into what its victims fear most, as children in the 1950’s and again in the 1980’s as adults. The villain’s most common form, though, is that of Pennywise the Dancing Clown. Most people are more familiar with the 1990 television miniseries of the same name that starred Tim Curry as Pennywise. The miniseries and novel have issues of their own but there’s no doubt that they’re both classics.

This new theatrical version of It, directed by Andy Muschietti, mostly remains faithful to previous adaptations. Seven friends, known as the Losers Club, band together over the course of a summer and use their strength to battle Pennywise (Bill Skarsgård) who preys on their individual fears. The plot begins as Bill Denbrough (Jaeden Lieberher) makes a paper sailboat for his brother, Georgie (Jackson Robert Scott). Georgie accidentally loses the boat down a storm sewer and is greeted by Pennywise who eventually murders him. Bill recruits Eddie Kaspbrak (Jack Dylan Grazer), Richie Tozier (Finn Wolfhard), and Stan Uris (Wyatt Oleff) to help him locate his brother in the sewers below Derry, Maine. From there, they meet Ben Hanscom (Jeremy Ray Taylor), Beverly Marsh (Sophia Lillis), and Mike Hanlon (Chosen Jacobs) and they all become friends.

In the town of Derry, there has been a growing amount of disappearing children which many seem to simply overlook. The kids know that there’s something obviously wrong with Derry and their strength as a group helps them to stay alive. Meanwhile, the friends are often bullied by Henry Bowers (Nicholas Hamilton) and his gang, tormented by supernatural events orchestrated by the evil clown, and dealing with various adolescent issues like home life and sexuality. Unlike the miniseries, the film doesn’t involve any of the adult versions of the characters. 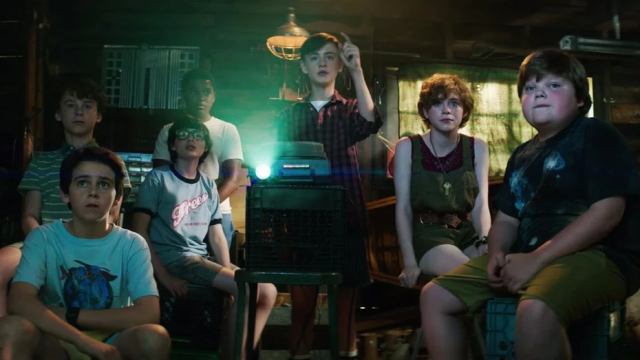 So, needless to say, It deals with a lot of different things in its two hour and fifteen minute runtime. Luckily, it balances all of it pretty well for the most part. The child actors are surprisingly good, as were the child actors in the miniseries, and they make the movie. Unlike the miniseries, these kids are vulgar and pretty hilarious as well. The only weak links in the cast making up the Losers Club are Chosen Jacobs and Wyatt Oleff as Mike and Stan respectively. They just don’t get a ton of time to develop and are mostly afterthoughts when compared with the others. Finn Wolfhard absolutely steals the show as Richie. His witty one-liners and insults define his character and is one of the most enjoyable aspects of the entire film. An honorable mention goes to Jack Dylan Grazer as Eddie as he also has many memorable moments.

Of course, we can’t move on without addressing Bill Skarsgård’s performance as Pennywise. Tim Curry is beloved as the man behind the makeup in the miniseries and, luckily, Skarsgård doesn’t attempt to replicate his performance. Skarsgård is more sinister, child-like, and creepier than Curry’s version. He truly feels like a monster that enjoys instilling as much fear as possible into his victims before killing them. It’s hard to say which performance is better as Curry’s is now legendary. It’s reminiscent to the debate as to which Joker portrayal is better: Jack Nicholson’s in 1989’s Batman (which, coincidentally, is on the marquee at the Derry movie theater in this film) or Heath Ledger’s in 2008’s The Dark Knight. They’re both different and brilliant in their own respects. The same now rings true for Pennywise the Clown. 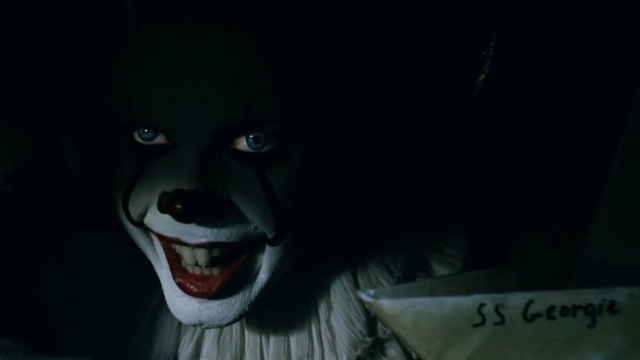 While there’s a lot to like about It, it’s far from perfect. Tonally, the film is a mess. What starts out as an eerie and terrifying experience, quickly devolves into 1980’s nostalgia and comedy. Even some of Pennywise’s antics are just over-the-top and ridiculous. The usage of popular music, including a running gag about New Kids on the Block and Anthrax’s cover of Trust’s “Antisocial” during a brutal rock fight between the Losers Club and Henry Bowers, feels unnecessary and cheapens the serious story that the film is trying to tell. That’s not to say that there’s no room for comedy but it’s too much at some points in this film.

Also, the CGI special effects are as ugly as ugly can be. The film sometimes uses practical effects that are extremely effective so to tarnish them with cartoony CGI is a shame. There’s nothing worse than being all in on a scare only to have it ruined by something that is obviously not there a second later. Many of the best scares were already given away in the trailers for the film such as the slide projector scene and Pennywise’s face half submerged in water. The 1990 miniseries did a great job with practical effects and it’s too bad that this new film didn’t follow suit more often. Again though, many of the scares are done well and the bad CGI doesn’t kill the entire experience. In all honesty, there’s a pretty great CGI scare of Pennywise and a refrigerator but we won’t spoil it here.

Ultimately, It is just too much fun to not give a solid rating to. In all fairness, this is our most anticipated film of the year and it’s hard to meet all expectations. The film met some of them while not meeting others. It’s still an enjoyably eerie experience to sit through and is worth more than one watch. The kids in this film aren’t as good as in the miniseries but there’s a sense of camaraderie between them. The portrayals are still very different and unique. The same can be said for Pennywise. Andy Muschietti’s It, while tonally uneven, is still one of the best horror films in recent years. It’s unlike the cookie cutter swill that the genre incessantly pumps out. It’s also a creepy, humorous, and deranged romp through one of Stephen King’s most popular stories and that’s just fine.

2 Thoughts to “In Theaters Review: It”