There’s a certain stigma surrounding action films these days. The majority of them are bloated CGI-fests with incomprehensible stories. Films like San Andreas, the Transformers series, and pretty much anything DC Comics has put out recently have tainted the genre. Despite being entertaining, even Marvel hasn’t done much for action movies with their lackluster villains and incessant “end of the world” scenarios. Though, for every G.I. Joe or Suicide Squad, there has been a Mad Max: Fury Road or Skyfall to save face. This is also the case with John Wick and the newest installment to the series, John Wick: Chapter 2.

For those that missed the first film, quit reading this and go watch it immediately. John Wick and its sequel were written by Derek Kolstad and directed by Chad Stahelski. David Leitch co-directed the first film with Stahelski but was uncredited. The directors took inspiration from anime and martial arts films with Keanu Reeves’ return to the action genre. Reeves channels Clint Eastwood’s stoic spaghetti western performances in his portrayal as the title character. With a production budget of only $20 million, John Wick was a surprise hit grossing over double that figure domestically. Due to the overwhelming response, a subsequent sequel was a no-brainer.

In John Wick: Chapter 2, John intends on returning to a normal life following the recovery of his 1969 Mustang. Of course, he’s quickly coaxed back into a world of killing after Santino D’Antonio (Riccardo Scamarcio) presents him with a medallion, or “marker,” containing their blood oath. Due to the oath, John must repay a favor for being allowed to retire originally. He declines which doesn’t sit well with Santino. Eventually, Continental hotel owner, Winston (Ian McShane), convinces John to honor the marker. Santino tasks John with killing his sister, Gianna (Claudia Gerini), and, soon after, puts a contract out on his life. The contract attracts countless assassins who John must murder his way through to exact revenge on Santino. 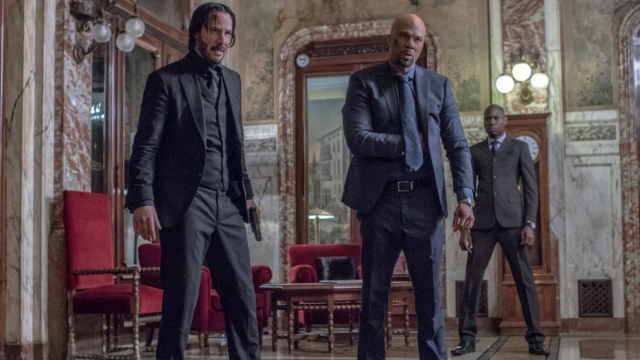 Like the first film, the action in John Wick: Chapter 2 is the highlight. John is lethal with only his bare hands but he’s especially brutal with a gun. While seeing someone with constant pinpoint accuracy may seem ridiculous, it works for these films. John wipes out waves of enemies with countless headshots. At times, the film seems like a video game with the sheer number of enemies that he wards off. Yet, when John does get into tougher fights, it feels like a bigger payoff. Specifically, there are a few fights with Gianna’s bodyguard, Cassian (Common), that are excellent. Between gunplay and gritty fistfights, the two beat the hell out of each other which make for some great moments. There’s also a battle with a deaf assassin named Ares (Ruby Rose) that stands out as a highlight as well.

Speaking of Common and Rose, the supporting characters in the film should be addressed. There are no weak links in the cast whatsoever. While Rose has a lot of onscreen charisma in general with roles in Orange is the New Black and xXx: Return of Xander Cage, taking away her voice and, in turn, her Australian accent, was a gamble in this film. Luckily, it pays off greatly as she feels like a legitimate threat to John. As with everything he’s in, Ian McShane is fantastic as Winston and the character receives new wrinkles by the film’s end. Reeves is also reunited with his co-star from The Matrix, Laurence Fishburne, as the Bowery King. He leads an underground network of the homeless who are all knowing of the city’s inner workings. John Leguizamo returns as Aurelio but, unfortunately, doesn’t have much screen time.

The other major highlights of both John Wick films have been the amazing visuals and cinematography. There are some breathtaking shots in John Wick: Chapter 2. Specifically, there’s an early scene in John’s house where you see rain pouring down outside through large windows in a hallway. The hallway is lit so that you see the shadows of the raindrops on the wall inside the house. It may be difficult to visualize but it’s an amazing shot. Also, one of the big, final action scenes takes place in an exhibit called “Reflections of the Soul” (pictured below). The exhibit is comprised entirely of mirrors where the characters are often tricked into shooting at reflections as opposed to their actual targets. It’s an extremely stylized moment that only a film like this can pull off for its finale. 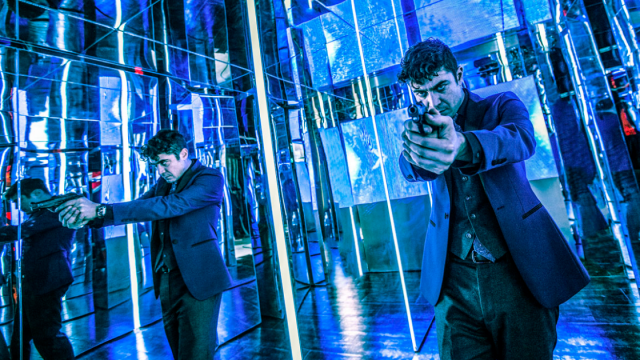 If there are any negatives to John Wick: Chapter 2, it’s that Reeves’ performance is a little stilted and uneven. While John is an awkward, yet deadly, individual, it seems too often like he’s reading lines. This is an extremely minor complaint though as the film is simply too much fun to watch to get hung up on a slight imperfection. Another thing to note is that it’s not quite as good as the first in the series but it’s very close. Both are superb additions to any action fan’s personal collection.

Both John Wick and John Wick: Chapter 2 are all they’re cracked up to be and more. Keanu Reeves is awesome in the role and, if you’ve seen his tactical training videos, he’s believable as well. Arguably, Reeves is better as John Wick than he is as Neo in The Matrix. The big question regarding the series now is whether or not there will be a sequel. As long as the films maintain this type of quality and stay true to what we’ve come to expect, there’s no reason that this can’t be a hard-hitting action franchise for years. While John Wick: Chapter 2 isn’t quite as good as its predecessor, it’s still, for lack of a better term, simply awesome.