For someone who’s not really known for his acting ability, Keanu Reeves has certainly carved out some iconic roles over the course of his career. That’s not to say that Reeves is necessarily a bad actor. He’s just very Keanu Reeves in almost everything he’s in with the main exception being the Bill & Ted series. Yet, there’s something about him that keeps people interested in his work. While many will cite his role as Neo in The Matrix as his most iconic and successful turn, Reeves finds himself hitting a massive stride in the action genre with a newer character. The third entry in the extremely satisfying John Wick series, John Wick: Chapter 3 – Parabellum, has been released and, much like its predecessors, it reinvigorates an often tired genre through its amazing action set pieces and an absurdly high body count.

The first film, simply titled John Wick, was released back in 2014 and was a simple tale of revenge. Retired hitman John Wick (Reeves) comes out of retirement after the son of a gangster kills his dog and steals his car. The film was a success with a positive reception from both critics and audiences as it made over four times its $20 million budget. A second installment, John Wick: Chapter 2 garnered even more success as the film upped the ante with John honoring a blood oath. Boasting even more astounding action and a visual feast in cinematography, Chapter 2 raked in $171 million at the box office. Inevitably, a third film would follow. For John Wick: Chapter 3 – Parabellum, creator/writer Derek Kolstad and director Chad Stahelski return along with Reeves for another bloody affair that delves deeper into the assassin order while stacking even more odds against the titular hero.

Parabellum picks up immediately where Chapter 2 leaves off. John Wick has murdered Santino D’Antonio on the grounds of the Continental Hotel, which is considered a safe haven for all. The proprietor of the Continental, Winston (Ian McShane), declares John “excommunicado” meaning that every assassin in New York City is out to kill him and claim a $14 million reward. Due to their friendship, Winston gives John until 6PM before the declaration is official. With seemingly no one to help him and a massive bounty on his head, John seeks passage to Casablanca, Morocco from the Director (Anjelica Huston), his former protector. John unites with his former friend, Sofia (Halle Berry), before attempting to right his wrongs with the High Table. Meanwhile, the Adjudicator (Asia Kate Dillon) visits both Winston and the Bowery King (Laurence Fishburne) and means to discipline them for aiding John’s attempts to kill Santino in Chapter 2.

As has been the case with the other two John Wick films, Parabellum is usually pretty light on story. This film probably has the most of the series but it’s still not hard to follow by any means. Though, it does get a bit messy in the middle with the events in Casablanca. It’s commendable that the filmmakers tried to expand on the history of the assassin pecking order that John belongs to but this is where the film gets a little lost too. Regardless, there’s still plenty of action that takes place in Casablanca that wont’ keep viewers from getting bored or uninterested in the story the film is trying to tell. 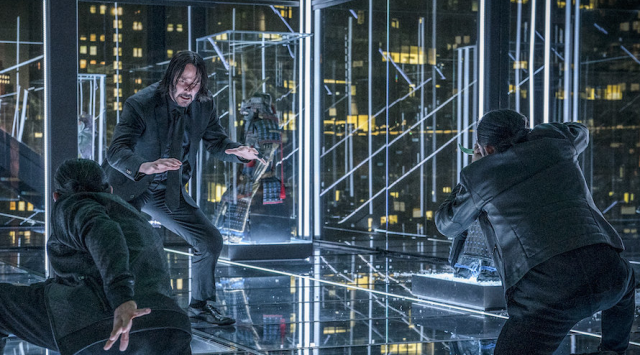 Let’s face it. The action is what audiences are flocking to the theater for when it comes to Parabellum. As the third go-round for John Wick, viewers should know what to expect by now. The film doesn’t disappoint as it has probably some of the best action scenes of the entire series. As previously mentioned, the film wastes no time picking up where Chapter 2 left off and the first 30-45 minutes are a non-stop thrill ride. John finds himself being hunted by numerous assassins and each scene is diverse and entertaining as can be. Do you want to see John get in a throwing knife fight? That’s here. How about taking down attackers while on horseback for some reason? You got it. Yes, the tactics can be absurd but that’s the draw for a film like this. It knows its place and it gets the job done in amazingly ridiculous fashion.

What often makes the action so good is how it’s shot. We’ve been critical in the past of how Marvel’s Russo brothers choose to display their action with constant shaky cam and rapid fire editing. The John Wick series does none of that. All of the action scenes display patient camerawork that allows viewers to actually see what’s going on. There’s a lot of work that goes into choreographing and executing action scenes and it’s nice to see the effort pay off in films like this. At 54 years old, Keanu Reeves does most of his own stunts in the John Wick films and it shows. There aren’t really any times where it’s noticeably not him onscreen. In this regard, he’s a lot like Tom Cruise in the Mission: Impossible franchise. It’s no surprise that that series is another showcase of superb action cinema. 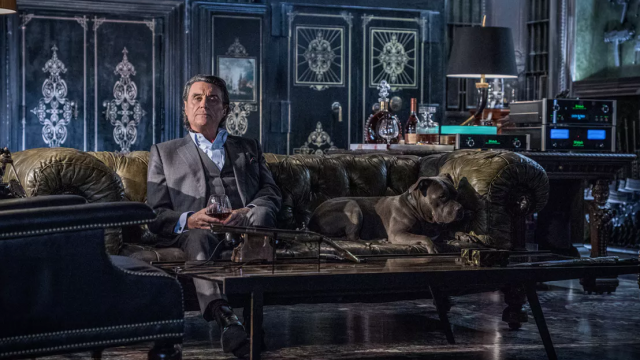 That’s not to say that there’s no additional substance to the film either. Some of the best character work of the series comes in the form of John Wick: Chapter 3 – Parabellum. Whereas Keanu Reeves was a bit stilted and awkward in Chapter 2, he’s more on par with his performance in the first film here. Ian McShane returns as Winston and has a bigger overall role to play this time around. He’s a delight to watch as he lets others do the killing while he waits patiently. Halle Berry has far less screen time as one would expect but she makes it count. As Sofia, she’s an equal to John Wick in terms of her combat skills. The series also introduces a pair of Belgian Shepherds at Sofia’s side that do just as much damage as she does. One of the biggest upgrades for Parabellum is its villain. Asia Kate Dillon’s Adjudicator is easily the most memorable villain of the series despite her lack of physicality. She’s simply sent to do a job and, come hell or high water, she’s going to see it through.

While John Wick: Chapter 3 – Parabellum is probably the weakest overall entry to the series, it’s still excellent. The first is still the best due to its simple revenge story and the latter two films serve as companion pieces that try to add new wrinkles to John’s tale. The wayward middle portion of Parabellum is what drags the film down but there’s just too much to like to rate it any lower. In addition, some of the final battles go on a bit too long and feature some repeated stunts. Yet, when the action is this good, it’s hard to fault anyone for getting carried away at times. Frankly, if you like Keanu Reeves and the John Wick series in general, you’ll love Parabellum just the same. This franchise is such a refreshing, over-the-top take on the action genre and, as long as it stays true to itself, it can go on for as long as it wants.