As we’ve discussed previously here on Cinema Smack, January is known as a “dump month” when it comes to cinema. With the big holiday releases already landing in theaters and the Oscars right around the corner, January is a bit of a dead zone. Here, studios drop more underwhelming titles and basically pray that they can at least make some of their money back. Thus far in 2020, we’ve gotten a horrible horror reboot in The Grudge and the wide release of an expertly crafted war epic in 1917. With William Eubank’s new film, Underwater, we find a surprisingly solid science fiction/horror experience in a month not known for quality.

Oddly enough, the film has actually been a long time coming. It was shot back in spring 2017 prior to 20th Century Fox being bought out by Disney. For three years, it remained in limbo as the deal was done and the film was pushed back to January 2020. This hasn’t been the only film to get this treatment. Most notably, Fox’s Dark Phoenix was largely written off due to the Fox/Disney merger and, more recently, The New Mutants had an unknown future as well. Though, a new trailer for the long awaited New Mutants was released last week with an official release date set for April 3rd. Regardless, many of these Fox-made films have been question marks since the sale and, in the case of Underwater, it was unceremoniously dumped in January.

The film takes place seven miles deep in Mariana Trench where an earthquake hits and causes a breach to the Kepler 822 drill station. Mechanical engineer Norah Price (Kristen Stewart) is able to close off part of the station to save herself, a fellow colleague, Rodrigo (Mamoudou Athie), and prevent further damage. Norah and Rodrigo work their way to the escape pod bay and discover other survivors, Paul (T.J. Miller), Emily (Jessica Henwick), Smith (John Gallagher Jr.), and Captain Lucien (Vincent Cassel) on the way. After discovering that there are no available escape pods, the crew must walk across the bottom of the ocean to a different station for their best chance at survival. Though, there may be something lurking in the deep that won’t allow them to do so.

When watching the film, the first thing you’ll probably notice is its total Alien vibe. There’s no doubt that this film was influenced by Ridley Scott’s 1979 classic. Its sci-fi/horror feel, its uncharted locale, and the depiction of foreign creatures are all ripped straight from Alien. The main difference is that instead of space, Underwater takes place deep in the ocean. That’s not to say that it’s a straight copy or that it’s even as impressive as Scott’s film. However, it certainly draws inspiration from there and, frankly, Underwater does a pretty good job of it too. 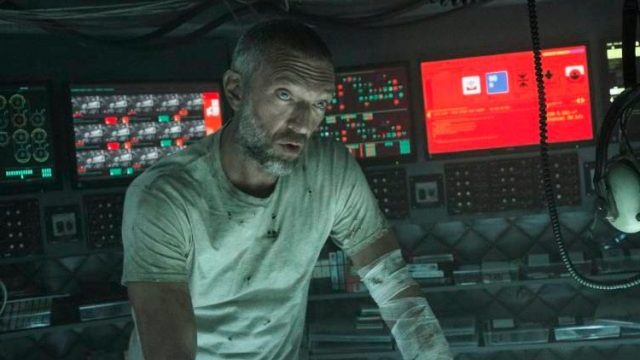 The film maintains a claustrophobic feel from start to finish as it makes viewers feel as if there’s nowhere to run. These people are basically trapped at the bottom of the ocean. If they stay put, they’ll die and if they try to leave, they’ll probably die that way too. All hope is lost but they have to make an attempt at living. Even when they’re walking across the bottom of the ocean in their pressurized suits, it feels as if any misstep could mark their demise. Things like faulty equipment, panicked crew members, and, of course, the monsters of the deep all take turns affecting the survivors. Again, these are all things that we’ve seen before in films like Alien or even John Carpenter’s The Thing, but they’re employed quite well here. There’s always a sense of urgency for the characters and it keeps you invested.

When it comes to the film’s horror aspects, there’s some good stuff here. There’s a fair amount of blood and gore for a PG-13 film. The moments are quick but, given the circumstances (i.e. water, pressure, etc.), these scenes prove to be effective and satisfying throughout the film. There’s quite a bit of CGI but it all looks pretty good. Most of it is saved by the fact that a lot of the ocean scenes are cloaked in darkness as the deep ocean probably would be. Yes, most of the CGI issues are hidden because of this but director William Eubank and his crew worked with what they had and made the best of it. 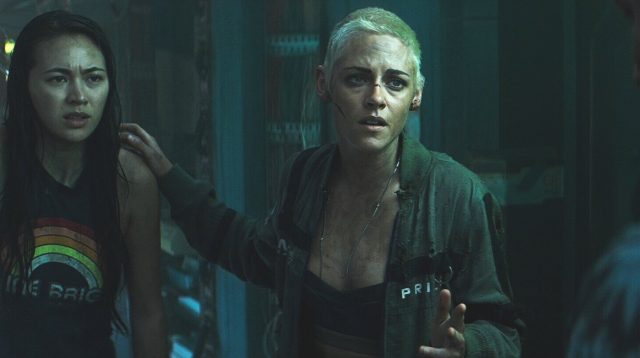 That’s not to say that the film is perfect by any means. Over its three year delay, it feels like Underwater was tinkered with. It doesn’t appear to be plagued by reshoots or any massive story changes or anything. However, it seems like extra dialogue may have been added in and the beginning and ending newspaper clipping scenes give a lot of seemingly unnecessary exposition. Again, there’s nothing too glaring but it just feels like there are some added fingerprints on parts of the film. The one major negative is T.J. Miller as Paul. Most people will recognize Miller as Weasel from the two Deadpool films. Miller himself is a funny actor and he plays that same part here but to less than stellar results. He chimes in way too often and basically every line from him is a joke. The rest of the cast members play their parts seriously while Miller hams it up the whole way. It’s not uncommon for their to be a comic relief character but, in this case, it’s a little too much.

When all’s said and done, Underwater is a solid, yet unspectacular, January film. It’s worlds better than something like The Grudge or last year’s Replicas and probably deserves a little more attention than what it has gotten. The film had a production budget of an estimated $80 million which its not even going to sniff at the box office. Unfortunately, that’s the effect of a January release date. For fans of other sci-fi/horror, and specifically Alien, give Underwater a shot. By no means is it a perfect film but it still provides some good thrills and a solid idea with some competent execution.