With superheroes dominating the box office for the past decade plus, a lot of other types of action films have quickly fallen to the wayside. Recently, we’ve seen poor reception to films like Terminator: Dark Fate and Rambo: Last Blood. The bombastic action franchises of the 80’s and 90’s still exist but lack the following they once had. One action style that has often been underutilized and cast off has been martial arts. Hitting highs with talents like Bruce Lee and, later, Jackie Chan, pseudo martial arts flicks like The Matrix and, most recently, John Wick have popped up over the years. Yet, they largely continue to lack representation in recent years. Vincent Soberano’s new film, Blood Hunters: Rise of the Hybrids, is a flawed but bold take on the genre as a mixture of films like The Warriors, Mortal Kombat, and Underworld.

The film opens with the history of the aswang, a breed of shape shifting evil spirits in the Philippines, as they wipe out much of humanity. Though, aswang/human hybrids are left behind to rule the underworld and are tracked by blood hunters. The story follows blood hunter Gabriella Chang (Sarah Chang) as she sets out to avenge her fallen husband and son by taking out the hybrid leader, Naga (Temujin Shirzada). She links up with a group called the Slayers, led by Monte (Monsour Del Rosario), that specializes in hunting hybrids. Among the group is another hunter on a quest for vengeance in Bolo (Vincent Soberano). He chooses to live as a hybrid by injecting himself with aswang blood as he seeks out Gundra (Mekael Turner), the hybrid who killed his family.

Judging by the plot, you can see that there’s a lot going on here. This is just the simplified version. Unfortunately, one of the biggest issues with Blood Hunters is its story as there’s just way too much for a martial arts action flick. The entire opening sequence gives viewers a rundown of everything going on before there’s even a chance to get invested. The plot itself is a lot like 2003’s Underworld with human/creature hybrids being hunted by another group. The Rise of the Hybrids subtitle even feels like it borrows from the 2009 Underworld prequel, Rise of the Lycans. While the underlying stories of Gabriella and Bolo’s respective pasts seem intriguing, they lack substance and effective storytelling within the context of the film to really get viewers interested in the characters. In addition, characters like Monte, Naga, and Gundra just feel like they’re there to move the plot along as opposed to feeling like fully fleshed out characters. 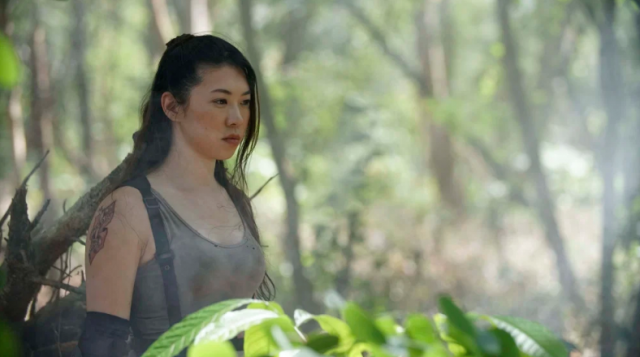 Speaking of the characters, they leave much to be desired as well. As we just mentioned with some of the supporting characters, the same can be said about pretty much all of them. They just feel like they’re there. Sarah Chang’s Gabriella and Vincent Soberano’s Bolo are the closest the film comes to having protagonists but there’s not much there to get viewers attached to them. This isn’t a knock against the actors themselves as most of them do the best with what they have. Sarah Chang is believable as a leading lady but there’s just not enough there to keep you with her all the way through. The villainous Naga and Gundra are basically cartoon characters in the film without any of the depth or intrigue of a character like Michael Sheen’s Lucian from Underworld. Although he’s tagged as the bad guy, Lucian brings legitimacy to his plight and makes Kate Beckinsale’s Selene question her entire race. Nothing of the sort happens with the characters here. Also, there are just too many characters in general. When you have difficulty trying to decipher who’s who, that’s a problem.

So then, what is the appeal of a film like Blood Hunters? It’s easily in the action scenes and stylistic choices. While not groundbreaking, the action is solid for a low budget indie film. The camerawork can sometimes be too claustrophobic as a lot of the shots are too close to really see what the actors are doing. There are also a lot of people flying into boxes and crates for some reason. Yet, there’s enough good to keep you entertained during the film’s climax. The modern gold standard of this type of action has been the aforementioned John Wick series but Blood Hunters isn’t quite there. It’s more reminiscent of something like the first Mortal Kombat in that the fights are taken seriously but have a hint of fun to them. Some of the stylistic choices also lend themselves to this. The comic book panel transitions, like the director’s cut of the 1979 cult film, The Warriors, look excellent and it’s kind of a shame that there’s not more of them. In a film like this, there should be a fun and maybe even a campy aspect. It’s too often where Blood Hunters can’t decide if it wants to be serious or fun and it hurts the film at times. 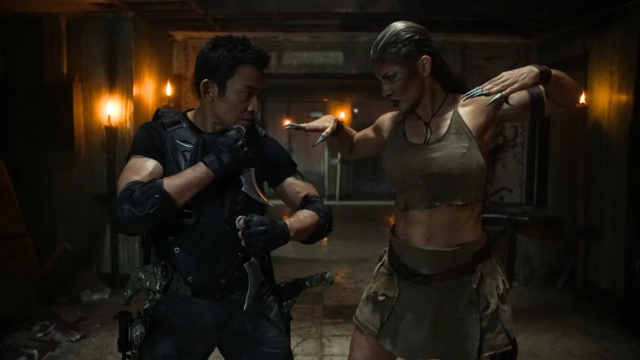 If there’s one thing that the film must be commended for, though, it’s the boldness of writer/director Vincent Soberano. Everything looks and sounds great with some nice cinematography from Miguel Cruz and Takeyuki Onishi. The sets are somewhat basic but, like a number of recent indie films we’ve reviewed, they’re dressed up nicely to not feel generic or boring. Soberano could’ve just had his actors doing traditional hand to hand combat with no frills or effects. Instead, there are plenty of things breaking, explosions going off, and other things to bulk up the action scenes. Again, something like John Wick can afford to get crazy with its action scenes whereas a lot of indie films can’t. Kudos to Soberano and company for making the film feel like it had passion and ambition behind it.

While Blood Hunters: Rise of the Hybrids won’t escape this review with a positive score, it doesn’t mean that others won’t like it. Fans of martial arts films may want to give this one a go if they just want to see some fun, climactic action scenes. For those looking for good characters and storytelling, the film falls a bit flat. Again though, it’s not that there isn’t something here with the cast. The story is just too convoluted and there are so many characters that it’s hard to fully invest in any of them. Even with its negatives, it’s hard to get too down on Vincent Soberano’s efforts. He clearly has a vision for Blood Hunters and we’ll have to see where it leads to in an inevitable sequel.

*Blood Hunters: Rise of the Hybrids is currently available on video-on-demand platforms like Amazon. Check out the trailer below.*