It never ceases to amaze how horror films strive to entertain. Last month, we reviewed an independent film from Richard Chandler called Parts Unknown. That film mixed professional wrestling with horror in a violent, grindhouse style romp. Well, here we are again with an independent, genre spanning exploitation film. In only his second feature film, writer/director Joe McReynolds tackles genres such as action, crime dramas, thrillers, and horror. In doing so, his film, Inhumanity, has a bit of a convoluted story but makes up for its shortcomings with its ridiculously satisfying style and antagonist.

The film begins with a young woman, Jessa Dixon (Darcel Danielle), as she’s kidnapped by Six Pack Sam (Leviticus Wolfe), a serial killer known for murdering women and leaving a six pack of bottled beer at the crime scene. Before Sam is able to kill Jessa, he’s thwarted by a group of masked men who take him to a secret facility. One of the men try to finish off Jessa but, instead, she slips into a coma. Upon waking, Jessa is told that her father, detective Bobby Dixon (Ken Edwards and Stephen T. Gerald), has committed suicide. Not believing that he killed himself, Jessa joins forces with Sergio (Ford Austin), an alcoholic private investigator, to track down her father’s real killer. Meanwhile, the mysterious Dr. Campbell (Diana Rose) does her best to try to cure Six Pack Sam of his murderous ways.

When you first start watching Inhumanity, you’ll probably find yourself asking what it is you’re watching. Going in blind, it’s definitely all over the place and you immediately notice the inconsistent storytelling. The film introduces a plethora of characters that sometimes struggle to make an impact. There’s a mob boss type that’s an avid golfer and a team of corrupt cops whose roles aren’t entirely understood even by the film’s end. In addition, even though Jessa is the main protagonist, her character isn’t especially interesting. Darcel Danielle’s performance is just fine but the character is simply lacking. 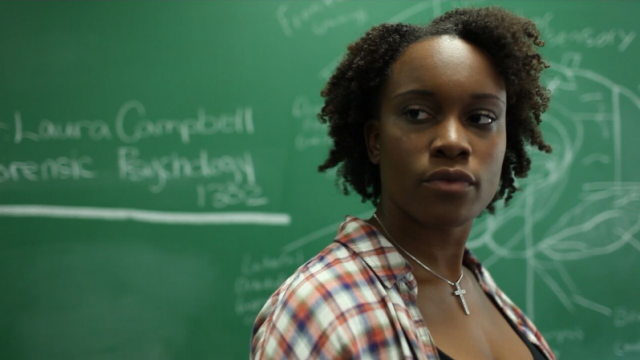 That’s not to say that the acting is bad per se. Yet, at times it really is. With Inhumanity, it’s somewhat hard to explain. The early parts of the film with its kidnapping and murder storyline feels like an old 1970’s film. Something like The Last House on the Left or even 1986’s Henry: Portrait of a Serial Killer come to mind. Here, characters like Jessa, Sergio (at times), and Sam feel mostly natural. Then, as the story continues, you’re introduced to what seems like intentionally poor acting. Characters like Ganon (Darrell N. Mitchell) have a hokey nature and stilted delivery of the dialogue. In this case, it’s not cringeworthy as it’s more hilarious watching some of the antics play out onscreen. It still leaves you questioning how you’re supposed to react though.

The film is at its best when following the antics of its main antagonist, Six Pack Sam. While the first 40 or so minutes seem to drag, the remaining hour and twenty minutes fly by. The first act sees the kidnapping and mentions the crimes performed by Sam. Then, it goes into Jessa trying to regain her memory and investigate her father’s death. As it continues, Inhumanity becomes absolutely insane as it truly embraces the grindhouse style. From Ford Austin’s humorous performance as a drunken, denim-clad, cowboy private investigator to its heightened violence throughout the last two acts of the film, it just reeks of exploitation cinema. 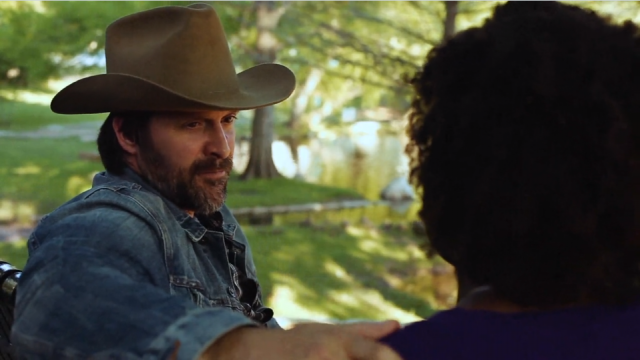 Ultimately, that’s the biggest problem with Inhumanity. It never follows one genre or style. Again, it’s at its best when it goes full exploitation/grindhouse. It almost seems as if writer/director Joe McReynolds came up with the idea for a crime drama, began filming it, and then realized it lacked flair. Jessa’s story never gets its just do but, as a viewer, it didn’t really resonate much anyway. When the film lets loose and has fun, you’ll find yourself doing the exact same. It’s fun watching a bizarre private investigator like Sergio guzzling booze and bumbling his way through the plot. When Six Pack Sam singlehandedly murders a party, it’s kind of awesome.

Inhumanity is one of those rare films where it’s encouraged to stick through the first third to get to the good stuff. For casual audiences, that can be a lot to ask. Not to mention, the film has a bloated two hour runtime. Had the early dramatic elements been taken out and the over-the-top moments taken center stage, Inhumanity could’ve been a potential cult classic. Instead, the film comes off as meandering at times. Yet, if you stick with it until the end, you’ll have an absolute blast. If you’re a fan of old exploitation and horror films, this is a film for you.

*Inhumanity is currently available for purchase on DVD here.*