Filmmakers have never shied away from making films about the industry. Over the years, there have been countless films dealing with Hollywood and the headaches and heartbreak that go with it. From classics like Sunset Blvd. and Singin’ in the Rain to titles like The Player and Adaptation., movies about movies have long been a hit with those wise to the business. As recently as last year, Quentin Tarantino proved that they’re not going away either with his release of Once Upon a Time… in Hollywood. It’s unsurprising that this also extends into independent filmmaking. After all, there’s plenty to cover with young, struggling filmmakers trying to make names for themselves in a notoriously harsh industry. In fact, this is the exact focus of the debut narrative feature from writer/director Moez Solis, The Mentor.

The film centers on a wannabe filmmaker, Nilah Williams (Brandi Nicole Payne) in Oakland, California. Nilah is having difficulties getting her screenplay made into a feature film when she stumbles upon her idol, filmmaker Claire Adams (Liz Sklar). After saving Claire’s life, Nilah lands a mentorship for the day. However, things quickly go awry when the two are kidnapped by a gang of masked assailants who look to exploit Claire’s talents in return for both hers and Nilah’s freedom.

Before we go any further, potential viewers should know that The Mentor is a film about filmmaking and the cutthroat nature of it. There’s a lot of film terminology banter and “insider” talk that’s sure to tickle past film school students but probably isn’t going to do much for those without some working knowledge of the film business. The group of kidnappers, consisting of Mr. Owl (Mike Bash), Mr. Raven (Michael James Kelly), Mr. Emu (Santiago Rosas), Mr. Pigeon (Corey Jackson), and Mrs. Hawk (Julie Lockfield), are having issues making their film and look to the pretentious and more experienced Claire to help them finish it. The never-ending discord between producers, writers, and directors is on full display throughout the film as none of the characters can decide on any definitive direction for their cinematic vision. 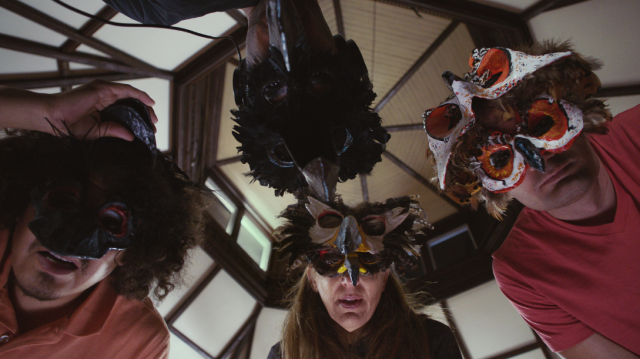 While the intentionally pretentious plot itself is sure to polarize viewers, it’s also one of The Mentor‘s best features. Again, film buffs and students are sure to get a kick out of Solis’s rapid fire dialogue on the business and its nods to filmmakers like Werner Herzog. The kidnappers often rip on Claire for her 500 minute long cut of one of her films and her independent bravery award. Solis himself even states that the film is born out of the frustration that comes with making movies as well as filmmakers and personalities committing terrible acts against each but still soaking up praise from moviegoers. For anyone that has dealt with filmmakers, whether novice or expert, in the past, you’ll certainly appreciate Solis’s critique on the holier-than-thou artist lifestyle that some of them live.

Luckily though, Solis doesn’t get too overly pretentious with his intentionally pretentious look at pretentious people. He still knows that filmmaking is about having fun and telling a story. Neither Claire nor Nilah ever really acknowledge that they’re in danger. Through frequent attempts at escaping, they’re mostly unscathed as the kidnappers start to thwart each other in amusing ways. Their bumbling plan continuously backfires as they struggle to really gain anything from their targets. The film feels reminiscent to something like the Coen brothers’ Barton Fink or Hail, Caesar! given its comedic focus on filmmaking and the overblown problems people face in the business. As previously mentioned though, it’s hard to say if viewers outside of the self contained world of filmmaking will appreciate The Mentor in the same way as those within it. 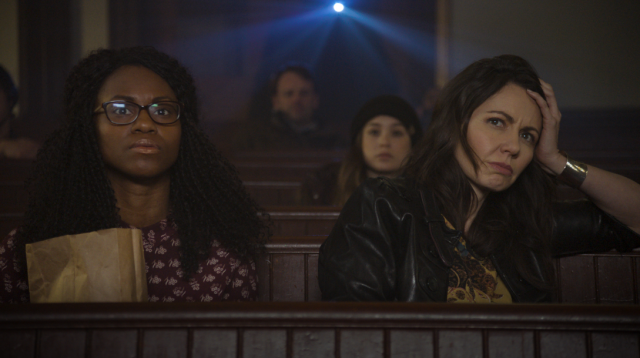 Yet, if there’s anything that will keep an audience invested in the film, it’s the likable cast. Most of the film focuses on the kidnappees, Claire and Nilah. Brandi Nicole Payne does a very good job as a student of the game looking to change the world using her passion. Nilah, like a lot of young, starry eyed filmmakers, her delusion of grandeur is abundantly clear as she opposes Claire’s unfavorable opinion on her work. Though, she just might not have what it takes as she hasn’t had any success with her script thus far. In her first feature film since 2009, Liz Sklar is the clear standout among the cast members. She handles her kidnappers the way she’d handle anyone in the film business with a cool confidence and a slight disdain. Claire does have some of her own skeletons in the closet but remains mostly unwavered by their reveal. She’s a level-headed vehicle that helps the audience navigate through the absurdity of Solis’s world. Speaking of absurd, Mike Bash’s Mr. Owl is top dog in that regard. His constant belittlement of everyone around him and fixation on each person’s role (and fitness habits) in both the kidnapping and filmmaking processes often sets up laughs and keeps the plot moving along.

With The Mentor, writer/director Moez Solis has something special. While it’s definitely quirky and has some independent limitations (some big name cameos may have helped put the film over the top), Solis delivers a fun critique on a hostile and maddening business. Anyone who has ever studied or been involved with it will surely find things to like here. The Mentor is a movie about how big of a pain it is to actually make a movie. Balancing egos and agenda with story and artistic vision is always going to hold back potential star filmmakers. It’s also sometimes necessary to weed out potential problem cases as well. While The Mentor may not be a film for everybody, it’s aware of its audience and is just a fun flick overall.

*The Mentor is currently available to rent or purchase on video-on-demand platforms like Amazon, YouTube, and Google Play. It’s also available to view for free on Tubi or Prime Video for Amazon Prime members. Check out the trailer below.*

One Thought to “Indie Film Review: The Mentor”