Back in April, we reviewed a film from director Abe Goldfarb called The Horror at Gallery Kay. We praised the film for its style, technical aspects, and its quirky David Lynch influences. The producer on that film, Bryan Enk, has also written and directed his own film that serves as a sort of spiritual predecessor and companion to Gallery Kay. Enk’s film, The Passion of Paul Ross, is chocked full of mystery and existential intrigue coupled with mind-bending storytelling to attract viewers.

The film’s plot follows Paul Ross (Steve Bishop), an aging artist who appears to be stumped by his latest painting. He soon discovers that his seemingly perfect suburban life is actually a prison conjured by unknown forces. That’s the simple version. The story itself isn’t necessarily the appeal of the film. It’s how the film is shot, acted, and presented that unfolds deeper meanings and branches beyond the plot description. Throughout the film, other characters carve out their own roles and lead the audience in different directions.

While the above plot may sound vague (and it is), it’s difficult to describe exactly what happens throughout The Passion of Paul Ross. It’d also be doing a disservice to ruin some of the film’s mystery. Of course, Paul is the main vehicle through which the story is told. Then, you have a character like Amy Beth Coup’s Natalie Lord who seems to be trapped in a similar type of purgatory as the titular Paul Ross. Natalie’s story appears to have a link to Paul’s but, as is the case throughout most of the film, it’s up to the viewer to put the pieces together. There are a number of suspicious characters including Becky Byers’ Amity, Matthew Gretzinger’s Wilson Shand, and Kim Long’s Light-Haired Woman. Again, their roles are mostly left to interpretation by the audience but they all have an interest in Paul and it’s unsure whether said interest is of a sinister or helpful nature. 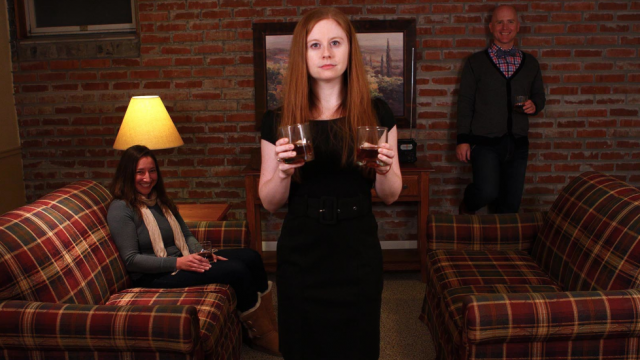 The acting style employed across the film may be a turnoff to some viewers but it’s definitely intentional. Steve Bishop’s Paul is mostly quiet and reserved as he’s guided through the film’s various locations. He seems to just go through the motions and accept what’s happening to him at face value. He often feels like Kyle MacLachlan’s Special Agent Dale Cooper from Twin Peaks stuck in the perplexing Black Lodge. He’s trapped in a familiar world but also is unable to fully explain why he’s there, what’s happening, or what exactly he’s supposed to do. The rest of the characters, especially Byers’ Amity, have an agenda and their performances come off as bizarre. The entire cast does a good job making the viewer feel uncomfortable but oddly interested in where these strangers want to take you.

The Passion of Paul Ross is a notably low budget affair but, luckily, it never feels like it. Simple settings like a bar, a house, and a hotel room are used effectively to move the story along. This kind of simplicity has long been employed by surreal filmmaker David Lynch. In the aforementioned Twin Peaks, a quaint logging town is used as a backdrop for horrifically supernatural events. In other works like Eraserhead, Lost Highway, and Mulholland Dr., Lynch tends to primarily keep his mysteries within living spaces. Enk does the same in his film. After all, what’s more terrifying than feeling unsafe within the confines of one’s own home? In addition to Enk’s Lynchian influences, there are obvious links to something like The Twilight Zone given its fantasy, supernatural, and psychological horror overtones. 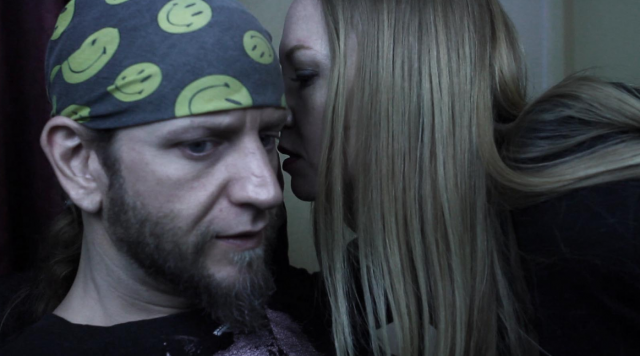 That being said, The Passion of Paul Ross certainly isn’t a film for everybody. If you’re not a fan of surrealist and experimental filmmaking, then this film isn’t going to make you one. There are far more questions than answers by the film’s end and it’s up to the viewer to piece the story together. There are many confounding details presented that may not have a payoff. In a way, the film is like a stream of consciousness or a dream that simply brings you along for a ride. You may not know entirely why or where it’s headed and Enk doesn’t feel the need to relay that information to you either. For those who aren’t into that kind of filmmaking, you’ve been warned.

However, for those that love a good trip, The Passion of Paul Ross is worth a watch. If you’re intrigued by the first watch, then another viewing is highly encouraged as well. Enk does a great job with the film as there are enough metaphorical bread crumbs that allow viewers to grasp the concept but still feel like they missed something along the way. Despite a small budget, it’s very well made and never bores even with its generically familiar locations. For the most part, The Passion of Paul Ross is a film whose success lies in what a viewer takes away from it. The viewer decides how far down the rabbit hole they’re willing to go to interpret the film’s story. As previously mentioned, it’s not for everyone but there’s a lot you can get out of it.