We’re going to do something a little different here on Cinema Smack today. For those who have checked out our Top 10 Doomed Romances, you know that traditional romance isn’t necessarily our thing. Today, though, we’re giving it a shot with the recently released video-on-demand/direct-to-DVD release, Who’s Jenna…? When it comes to romantic comedies, the target audience is generally women. Whether it’s teen/young adult or a more mature audience, the rom-com sub-genre tends to lean towards the female demographic. In the case of Who’s Jenna…?, the intended audience is actually men. How do you make a male oriented rom-com? You infuse a little porn into it, of course!

No, Who’s Jenna…? isn’t actually a pornographic film by any means. The story begins with two neighbors, Tom and Jerry, played by Vincent Pastore and Jeremy Gilbert respectively, rushing their hostile pregnant wives to the hospital in 1975. Both of their sons are born and they grow up to be the best of friends. Fast forward to the present day where Jonathan Burke (Bill Sorvino) and Andy Roma (Joseph D’Onofrio) are celebrating their birthdays at a hotel bar. A beautiful blonde woman, Jenna Casey (Tracey Birdsall), walks in and immediately locks eyes with Jonathan before sparking up a romance. Though, Andy, an admitted porn addict, swears that she looks like and even shares a name with an adult film actress. 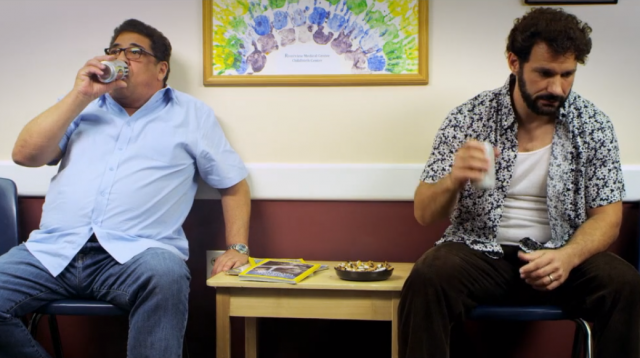 The acting in Who’s Jenna…? is pretty good across the board. Sometimes in independent film, there tends to be at least a cast member or two who stick out for the wrong reasons. Here, all of the actors are believable and play their roles well. Bill Sorvino and the ridiculously charming Tracey Birdsall appear to have chemistry onscreen despite their somewhat quick courtship. For fans of The Sopranos, the big draw here is Vincent Pastore. He, of course, played the lovable Salvatore “Big Pussy” Bonpensiero. He does a good job in this film as well but his role is, unfortunately, brief. The real standout is Joseph D’Onofrio as the porn connoisseur, Andy. He’s like a perverted Joe Pesci. In fact, he actually played the younger version of Pesci’s character, Tommy DeVito, in Martin Scorsese’s 1990 film, Goodfellas.

While the acting is good and there’s some pretty decent comedy, Who’s Jenna…? isn’t perfect by any means. There are two big problems with the film and both are in its story. Firstly, the film tries to do a little too much overall. If you go back and read the plot outline in this review, you see that it’s split into two parts. Well, that’s exactly how the film feels when you watch it. Initially, you’d think that Jonathan’s relationship with Jenna would be at the forefront. Surprisingly, it’s not. Joe Barcia’s blackmailing of Jonathan is the main storyline and it even drives a wedge in between some of the characters. It’s difficult to say that this was a good choice since Tracey Birdsall’s Jenna is so electric onscreen and seems underutilized. 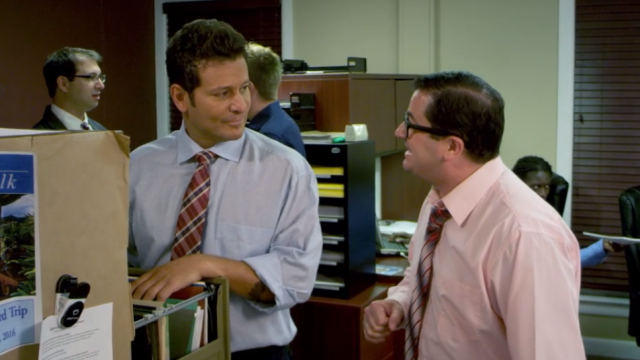 That brings us to the next gripe. In a film titled Who’s Jenna…?, that question is hardly addressed. It’s an odd name for a film that’s rarely ever about that particular character. Sure, viewers are thrown a bone in a mid-credit scene but it doesn’t make up for the misleading title and story. The only reason to ask that question is because of how much of an afterthought the character of Jenna feels at times. Even with her familial connection to Jonathan’s boss, you never see Jenna’s sister/Joe’s wife. Basically, it’s only ever stated that they have some kind of relation. In all fairness, had the film went in a different direction by sticking with the porn star storyline, it may have drawn similarities to 2004’s The Girl Next Door. Honestly though, that may not have been a bad thing.

While Who’s Jenna…? is most certainly a flawed film, it still has a charm to it. Even though porn does play a semi-large role, the film never gets too raunchy or obscene. It’s moreso used to add different wrinkles to some of the characters. Writer/director Thomas Baldinger plays it safe and offers up an endearing and amusing rom-com storyline that strays from being overly sappy. It’s strange to describe Who’s Jenna…? as a “cute” movie but that’s kind of what it is. It’s a cute idea with likable characters. It may not completely deliver on its own synopsis but it’s an entertaining watch and there are far worse ways to spend 75 minutes.

*Who’s Jenna…? is available for purchase on DVD at this location. The film is also available to watch on many video-on-demand platforms including Amazon Prime.*