Contrary to popular belief, horror isn’t always about blood, guts, and scares. Sometimes it’s all about the feel and substance of a film. There are even some instances where horror is just about having fun. This is especially true with short films. Filmmakers don’t need to drag a story out for 90 minutes or fill it with unnecessary events. Zach Lorkiewicz’ new horror short, The Ball, is a combination of all of these things. It has a distinct horror vibe with some good visuals but also isn’t afraid to have a little fun.

The film is the newest installment to the “Middleton High” series from Count the Clock. Count the Clock is an artist’s collective based in Los Angeles. They release low budget horror content for consumption online. Their “Middleton High” series focuses on surreal events happening at the fictional high school through social media platforms like YouTube, Instagram, and Tumblr. Though, The Ball, set during the Victorian era, focuses on an ancestor of the lead character in the series’ first short film, Pep.

The Ball stars Avril Dominguez as Pearlie, a girl waiting for her boyfriend to pick her up to head to the town ball. Though, as she prepares for the ball while speaking to herself in Shakespearean rhyme, she’s attacked by an unknown force. We come to find out that her late sister, Permelia (also played by Dominguez), has a bone to pick with her living relative.

The first thing you notice about The Ball is its visual style. The Victorian setting clashes with the excellent color usage. Italian filmmaker Dario Argento is cited as an influence on the film and it definitely shows. It starts out relatively subdued visually as Pearlie speaks romantically of the winter ball in the moonlight. Shortly thereafter, things begin to descend into madness as things become hostile between the two sisters. As the film continues, bright greens and pinks become more prevalent and take over the elegant style. On Count the Clock’s Indiegogo page for the film, the term “pop-horror” is used a few times. After watching the film, as well as some of their other work, it’s easily understood what they mean by it.

As previously mentioned, the characters of Pearlie and Permelia speak in rhyme throughout the film. Specifically, they speak in iambic pentameter. While this may be unappealing to some, it certainly adds to the quirkiness that Count the Clock seems to embrace. For others, it’s quite entertaining to listen to the dialogue and legitimately fun hearing the two sisters go back and forth with one another. Although Lorkiewicz specifically states that Edgar Allan Poe was another influence on The Ball, one of the first things that came to mind while watching it was The Simpsons’ adaptation of Poe’s The Raven from their “Treehouse of Horror” Halloween special. There’s just something about the styles clash of comedy, horror, and the old-timey dialogue that meshes so well both in The Simpsons version of the story and with this film. 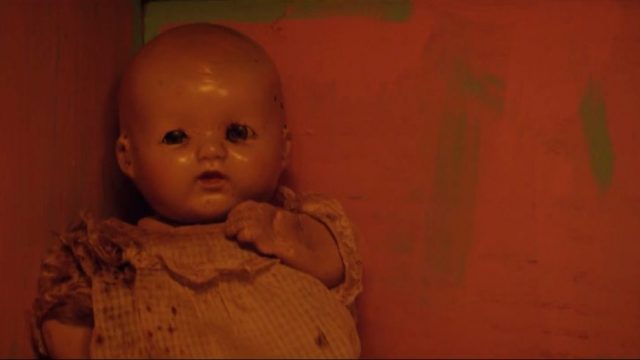 One final thing to mention about the film is its use of music. There’s hardly any time where there isn’t music playing in the background. As the dialogue switches between Pearlie and Permelia, the music jarringly changes from sweet and innocent to sinister and damning. It’s ridiculously effective and also further develops the two characters. The battling musical themes work perfectly and don’t feel the least bit out of place. That’s quite a feat given the abrupt change of pace while jumping between them.

In all honesty, it’s hard to find anything negative to say about The Ball. The phrase “styles clash” is the perfect way to describe it and, in this case, it’s not a bad thing. It’s both humorous and eerie, virtuous and vile, and modern and classic. Frankly, The Ball is just a cool film. There aren’t a lot of horror films like it that do a lot of different things really well. Overall, it’s an ambitious project that could’ve gone terribly wrong but with good acting, a silly tone, and an awesome style, The Ball delivers on all fronts.

One Thought to “Short Film Review: The Ball”