Millennials, prepare to have your worlds rocked. Earlier this month, Jurassic Park celebrated the 25th anniversary of its theatrical release. Many people in this age group remember growing up watching the classic dinosaur adventure but, when put into an actual number, it’s shocking to think that the film is that old already. Now, wouldn’t you know it, there’s a new film set for release tomorrow (or tonight for advance Thursday screenings). Therefore, it’s the perfect time to resurrect Cinema Smack’s State of the Franchise for a look back on the entire Jurassic Park series!

The original 1993 film was adapted from Michael Crichton’s novel of the same name. Published in 1990, the novel actually began as a screenplay that Crichton wrote in 1983. In that version, a graduate student recreates a dinosaur and the story was told by a child. Though, Crichton changed it to an adult after receiving feedback. The novel went on to become a bestseller and the work most associated with Crichton himself. A sequel followed in 1995, entitled The Lost World, which became part of the title for the second film as well. Despite Crichton being somewhat pressured into writing it due to the success of the first novel and subsequent film, The Lost World hit number one on the New York Times Best Seller List.

Going forward, the story details will follow the movie adaptations as opposed to Crichton’s novels. In the case of the first Jurassic Park, they’re relatively similar. Industrialist John Hammond (Richard Attenborough) and his company, InGen, successfully clone and create live dinosaurs by extracting DNA from mosquitoes trapped in amber. Hammond creates a theme park on Isla Nublar, dubbed Jurassic Park, to show off his successful recreations to the world. Following the death of one of the dinosaur handlers, the park investors’ lawyer, Donald Gennaro (Martin Ferrero) is tasked with ensuring that the park is safe for visitors. He invites Dr. Ian Malcolm (Jeff Goldblum), a mathematician and chaos theorist, while Hammond invites paleontologist Alan Grant (Sam Neill) and paleobotanist Ellie Sattler (Laura Dern) for a tour of the park. Additionally, Hammond’s grandchildren, Lex (Ariana Richards) and Tim (Joseph Mazzello) tag along on the tour.

Meanwhile, Dennis Nedry (Wayne Knight), the disgruntled lead computer programmer, agrees to sell frozen embryos of each of the fifteen species of dinosaur on Isla Nublar to a rival competitor. To do this, he devises a plan to deactivate the park’s security systems to steal the embryos. This causes the park to lose power during the tour and the dinosaurs to break free from their enclosures.

Needless to say, Jurassic Park was a smash hit. It was actually the highest grossing film ever made until Titanic broke the record in 1998. Industrial Light & Magic handled the computer generated imagery for the film while director Steven Spielberg invested in DTS sound systems. The special effects and sound design are absolutely incredible to this day. Sure, there are some moments that are slightly dated in terms of CGI but they’re far from cringeworthy. In addition, the life size animatronics used for some of the dinosaurs are out of this world. Again, even when watching this movie today, the effects and booming sound is just as impressive as it was back in 1993. The famous Tyrannosaurus rex scene is legendary in the action/adventure genre and even in horror. 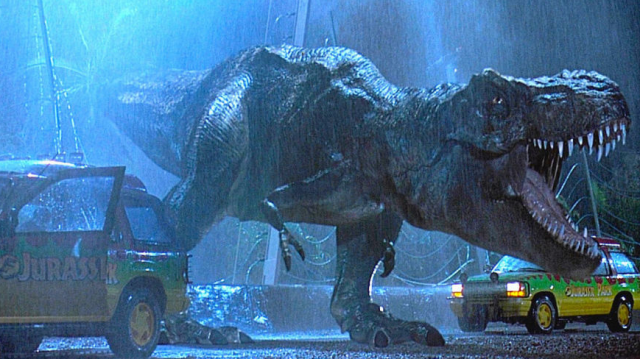 Now, before we get into the meat of this discussion about Jurassic Park, let’s try to keep an open mind. We’ve already established that many people grew up with this film and it has definitely solidified its place as a classic nonetheless. However, it’s far from a perfect film. Its biggest flaw is in its story. It’s not bad per se but it does just enough to get you on board. Wayne Knight’s Dennis Nedry is essentially Janet Leigh in Psycho. He shows up to put the plot into motion. Then, Nedry, his scam, and the dinosaur embryos are ultimately forgotten.

The characters are also a little bland. Like the plot itself, they do just enough to get the job done. Yes, we all love Jeff Goldblum as Ian Malcolm. Alan and Ellie are supposedly a couple but there’s little to no chemistry between them. The kids, Lex and Tim, are decent but, seriously, where are their parents in all this? In all honesty, Nedry is probably the character we know the most about and he’s a pseudo-villain. Samuel L. Jackson shows up briefly in the role of an exposition machine spitting out plot details like they’re nothing. None of the characters are bad but they’re a bit uninspired. Luckily, the film never lingers too long on them as there’s always plenty of dino action to focus on.

Of course, with such massive success, a sequel was inevitable. In 1997, Spielberg returned with The Lost World: Jurassic Park. The plot sees Jeff Goldblum return as Dr. Ian Malcolm in the lead role this time. Following the events on Isla Nublar, John Hammond (Attenborough) tells Malcolm that the dinosaurs were actually created on a different island, Isla Sorna, before being transported to Isla Nublar. A hurricane wiped out most of the island but the dinosaurs remained and flourished. Hammond successfully convinces Malcolm to travel to Isla Sorna only after telling him that his girlfriend, Sarah Harding (Julianne Moore), is already there documenting the dinosaurs. Along with photographer Nick Van Owen (Vince Vaughn) and his stowaway daughter, Kelly (Vanessa Chester), Malcolm arrives on the island and must contend with InGen which is now led by Hammond’s nephew, Peter Ludlow (Arliss Howard). 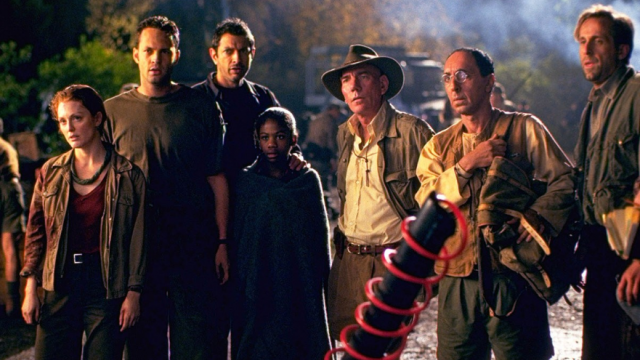 The Lost World: Jurassic Park isn’t even close to the first film in terms of quality. Despite this, it was still the second highest grossing film of the year only behind Titanic. There’s just no reason to really care about anything happening when it comes to the plot. The reasoning for going to the island is shaky at best and Goldblum’s Malcolm isn’t an especially interesting lead character. They threw him a daughter and love interest that he has zero chemistry with to try and strengthen his character but it simply doesn’t work. Lastly, Steven Spielberg tacks on an ending that is a blatant ripoff of King Kong with a splash of Godzilla as a Tyrannosaurus rex destroys San Diego after being captured. This part is especially painful to sit through especially if you’re a fan of the original King Kong. Even the T. rex itself is overdone and not nearly as cool as the previous movie.

That brings us to Jurassic Park III. Released in 2001, Sam Neill returns to the series as Dr. Alan Grant. He’s recruited to give an aerial tour of Isla Sorna by Paul (William H. Macy) and Amanda (Téa Leoni) Kirby. During the tour, Alan discovers that he was duped by the Kirbys. Their son is lost on the island after a hang gliding mishap and they want Alan to help find him. After being knocked unconscious by one of the Kirbys’ mercenaries, Alan wakes up after they’ve landed on the island. From here, the usual chaos ensues with dinosaurs running rampant and taking out members of their search party. 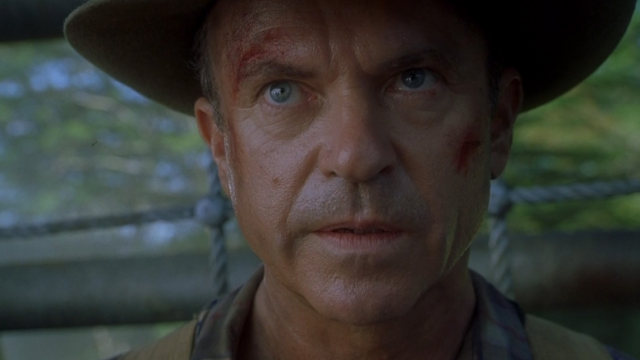 In all honesty, there’s just really not much to say about Jurassic Park III. It’s terrible. Is it the worst movie ever made? No. Is it the worst Jurassic Park movie? Without question. Joe Johnston directs this time around but, again, the story itself is unbelievably stupid. For Alan to believe the Kirbys that they didn’t intend to land was plain gullibility on his part. Even with the return of Sam Neill, this film lacks any resemblance to the original. The spectacle and awe of the 1993 film is completely absent as ugly CGI has fully taken over the franchise by 2001. The characters hit a new low in this film and even Alan Grant from Jurassic Park III feels like a shell of the character from the 1993 film. Partner all this with a cop out ending with a phone call rescue and you have a bottom of the barrel adventure. Yet, it still made over $368 million somehow.

After the abysmal showing that was Jurassic Park III, the franchise remained in limbo for fourteen years. Originally, a fourth film was intended for a 2005 release but the project went through developmental hell instead. Over the years, various cast members of the original film have addressed a fourth installment and their respective involvement. After Michael Crichton’s death in 2008 from lymphoma, the future of the franchise was cast further into doubt. Though, there were still rumblings and, in March 2013, Colin Trevorrow was hired to direct. Trevorrow did a complete rewrite of the script with his writing partner, Derek Connolly, and Jurassic World was set for release on June 12th, 2015.

Set 22 years after the original film, a new theme park built on the site of the original Jurassic Park has been operating for ten years. Dubbed Jurassic World, the park operates like a modern zoo with dinosaur performances and spectacle. Park owner Simon Masrani (Irrfan Khan) encourages geneticist Henry Wu (B.D. Wong) to create a new species for the park. Thus, Wu creates the Indominus rex. Meanwhile, United States Navy veteran Owen Grady (Chris Pratt) trains the park’s four velociraptors while InGen’s head of security, Vic Hoskins (Vincent D’Onofrio) believes they should be for military use. Owen is tasked with evaluating the enclosure for the Indominus rex but it’s able to camouflage and, ultimately, breaks out of its pen. Meanwhile, the park’s operations manager, Claire Dearing (Bryce Dallas Howard), has her nephews visit at the same time the park goes into shambles. 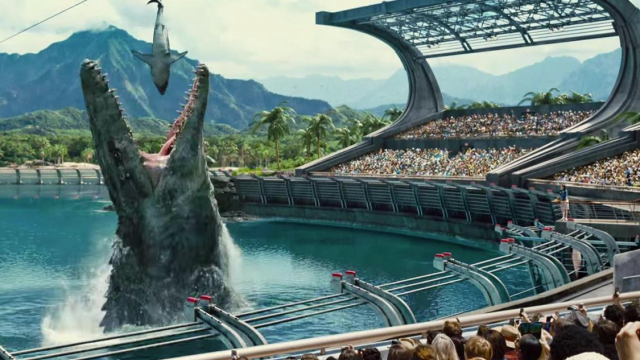 Jurassic World was another massive hit as it went on to become the first film to gross over $500 million in its opening weekend. It eventually put up $1.672 billion worldwide and currently sits at #5 all time in terms of highest grossing films. Jurassic World remained true to its roots as it was nearly a carbon copy of the the original Jurassic Park in the same way that Star Wars: The Force Awakens compares to its 1977 counterpart. It brought back much of the magic and playfulness as well.

That being said, though, it also had many of the same problems as the original. Even with someone as charismatic as Chris Pratt, the characters are mostly there to move the plot than provide any real depth. Like its predecessors, no one is necessarily bad, but there’s no real standout either. Claire Dearing’s nephews are basically throwaway characters that are definitely meant to be Jurassic World‘s Lex and Tim. One big difference is in the film’s special effects. Made in 2015, there’s definitely more CGI than practical effects and it shows. While they look fine, none of the subsequent films in the franchise ever came close to replicating what the original film accomplished. Regardless, Jurassic World is easily the best sequel in the series.

It has been three years since the release of Jurassic World and with its great success, there was no doubt that there’d be a fifth entry. With Jurassic World: Fallen Kingdom, fans are set to return to Isla Nublar with Chris Pratt’s Owen Grady and Bryce Dallas Howard’s Claire Dearing once again. With a volcano set to erupt, the question is whether to save the remaining dinosaurs on the island or not. On paper, Fallen Kingdom reads somewhat similar to The Lost World. Even Jeff Goldblum returns as Dr. Ian Malcolm. Regardless, if there’s anything certain about a film set in the Jurassic Park universe, it’s that Fallen Kingdom is set to make a pile of cash at the box office. Will the film itself be any good? We don’t have long to wait to find out as the film will be in theaters everywhere tomorrow.