Alright, alright. It has been an absolute eternity since we’ve dropped a new television wrap-up here on Cinema Smack. With a greater focus on Indie and Short Film Reviews on the site, television basically took a back seat but it’s time to get back on track. Two years ago, we covered the debut season for a Netflix show called Altered Carbon. Based on the Richard K. Morgan novel of the same name, the first season was a fun little piece of science fiction television that lacked some direction by its end. After a lengthy absence, Altered Carbon Season 2 has landed on the streaming service and is sadly more of a mixed bag than the first go-round.

As previously mentioned, the show is an adaptation of a 2002 novel by Richard K. Morgan which creator Laeta Kalogridis optioned as a feature film fifteen years prior to Netflix’s involvement. Kalogridis also served as executive producer and showrunner on the first season but was replaced in the latter category by Alison Schapker in May 2019. While the first season mainly followed the story of the first in a trilogy of novels, the second season actually follows the third and final book, Woken Furies. Because of this, it’s safe to wonder exactly where the show is headed and how long it can continue to run. In an effort to avoid being wordy and redundant, we’re going to assume you’ve already seen the first season and are at least familiar with the show’s unique terminology.

The second season picks up 30 years after the events of the first with a bounty hunter named Trepp (Simone Missick) on the lookout for “the last Envoy” Takeshi Kovacs. She tracks him to a club where she finds him hidden in the sleeve of a lounge singer. Kovacs refuses to meet with Trepp’s employer, Horace Axley (Michael Shanks), so she shoots him which leaves him no choice. Kovacs, played by Anthony Mackie this time, is re-sleeved in a high tech, upgraded body as Axley asks him for protection. In return, Axley offers the location of Kovacs’s former lover, the revolutionary Quellcrist Falconer (Renée Elise Goldsberry), who’s believed to be dead. Unfortunately, they’re compromised and Axley is quickly disposed of. Kovacs returns to his home planet of Harlan’s World and teams with old and new characters like Trepp, the A.I. proprietor of The Raven Hotel, Poe (Chris Conner), and an archaeologue named Dig 301 (Dina Shihabi) to find Quell and figure out the mystery behind the bodies piling up in his wake.

Like the first season of Altered Carbon, there’s kind of a lot going on. There’s so much that sometimes you start to forget what the exact purpose of the show really is. For the most part, Season 2 continues the story that began in the latter half of the first. Referring back to our Season 1 wrap-up, we explained how the first six episodes were intriguing with their focus on a murder mystery and effective world building. The last few episodes, though, introduced something of a new plot and largely focused on Kovacs’s backstory fighting alongside Quell. This storyline was not the most effective route for the show to take as it felt more stock and mostly abandoned the mystery. This continues into Season 2 where there are very little surprises. There are a few points in the show where the characters express revolutionary breakthroughs but we as viewers already picked up on them long ago. 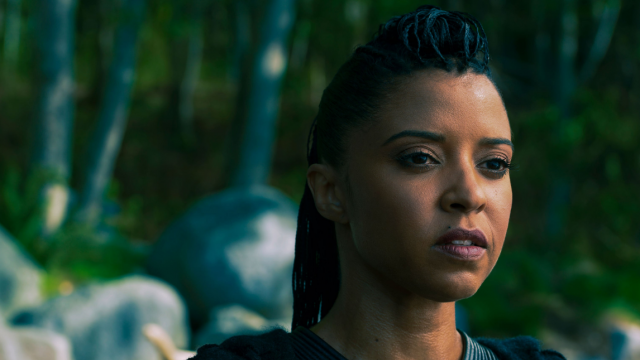 One of the biggest causes of this throughout the show is the very poor storytelling. There are so many instances where scenes contain very little action or elements of showing instead of telling. Instead, the characters often like to stand around and just talk about events out loud. It’s straight up bad screenwriting as the show’s most dramatic moments are relayed through words instead of action, emotion, or subtle gestures. The characters always say how they feel or what their plans are instead of the cast being allowed to act. There’s constant nonsensical jargon, political speak, and and sci-fi vocabulary that makes it especially hard to get absorbed in anything the characters are doing. There are plenty of times throughout the season that may have you feeling something like this.

Speaking of the characters, there’s some good and some bad here. No, there isn’t any bad acting but the story and script hurts the characters at times. Renée Elise Goldsberry returns from Season 1 as Quell and is much more heavily featured this time around. The mystery surrounding her return is one of the better storylines from the season even though it’s a little hollow. Goldsberry does the best she can with the character despite some plot holes though. For instance, how is Quell in the same sleeve that was blown up by Rei in the first season? Ultimately, death works in whichever way is the most convenient for the writers in Altered Carbon. Chris Conner is back as series standout Poe as well. His story is the most interesting by far as he suffers from a glitch that affects his memory and his usefulness to Kovacs. Conner is still as charming as ever and it’s strange that the most human characters in the show are the artificial intelligence characters. The same thing can be said about Dina Shihabi’s Dig 301. Dig has something of an existential crisis but finds her calling by aiding Poe and Kovacs. Simone Missick is fine as Trepp but she’s basically just Misty from Luke Cage in a futuristic setting. The season’s “villains,” Danica Harlan (Lela Loren) and Colonel Ivan Carrera (Torben Liebrecht) don’t really have a whole lot going on most of the time either.

This brings us to Anthony Mackie as Takeshi Kovacs. The first season starred Joel Kinnaman as the character but, here, he has been re-sleeved. Now, this is a really great idea in a show where characters consistently cheat real-death. However, it can be a problem in a television show where actors are being asked to take over for other actors. In this case, Mackie lacks some of the anger and angst that Kinnaman brought to the role. On top of that, Mackie is most widely known for being Sam “Falcon” Wilson in the Marvel Cinematic Universe. It’s hard to separate him from that role and it’s also difficult to believe that this is the same Takeshi Kovacs. They should’ve focused more heavily on building unique traits for the character that could be passed on from actor to actor once they’re re-sleeved. In the case of Altered Carbon, Kinnaman and Mackie share the same character in name only. The latter isn’t bad in this new season but he’s far less interesting than his predecessor and, again, it just doesn’t feel like the same Kovacs. To avoid spoilers, we won’t even get into one of the subplots of the show but it adds even more evidence that multiple actors need more guidance in playing the same character. 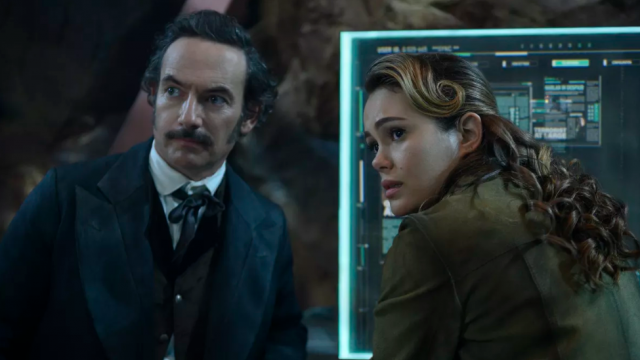 One of the highlights of Season 1 was its exceptional world building. Seeing the futuristic streets and businesses of Bay City, the A.I. Raven Hotel, and the Head in the Clouds floating pleasure palace added some uniqueness and identity to the show. Season 2 mostly does away with anything of interest and comes off as much more bland. It kind of pulls a Walking Dead and spends a lot of time meandering around out in nature. When it’s not out in the woods, events take place on smaller industrial looking sets. The most memorable scenes come from Poe visiting a serene construct that not only enhances the Poe character but teases viewers with something fascinating instead of the depressingly drab sets that inhabit the rest of Season 2. The first season was reportedly the most expensive Netflix production to date and, in hindsight, it showed. Judging by the look of Season 2, the budget must’ve hit the floor for Season 2.

When it comes to the future for Altered Carbon, it feels like there will be a third season. Although this hasn’t been confirmed, there are enough loose ends for the show to continue on even if it’s hard to figure out why. As a whole, it just feels mishandled. Nothing in the show is offensively bad but it lacks a singular vision. It’s as if someone liked the idea of the books but wasn’t sure how to transfer it to the small screen. Instead of figuring out something interesting, they just brushed it under the carpet and expected viewers to accept it. For the most part, there are things to overlook but a little clarity throughout the incessant, twists, turns, and swerves would be nice too. There’s a cohesive narrative and a compelling world buried in Altered Carbon somewhere. We’ll just have to wait and see if the creative trust behind the show wants the audience to experience it in Season 3.