As everyone should know by now, Disney has been absolutely killing it on the big screen as of late. Their partnership with Marvel has paid massive dividends as has their acquisition of LucasFilm. They have also been steadfastly laboring over their own classic properties. Disney has consistently been re-imagining their animated library into live action blockbusters. Following their work on Alice in Wonderland, Maleficent, Cinderella, and The Jungle Book, comes their newest adaptation of Beauty and the Beast.

When the first teaser trailer for the film was released in May of last year, we stated that director Bill Condon would have his work cut out for him. After all, the 1991 film was an instant classic and the first animated film to net an Academy Award nomination for Best Picture. It was also selected for preservation in the National Film Registry by the Library of Congress in 2002. To say the least, Condon knocked the ball out of the park with his adaptation. The film raked in over $357 million worldwide in its opening weekend and is surely well over $400 million by this point. Its faithful retelling of the classic Disney film along with its incredible set design and cast already set Beauty and the Beast aside as one of the best films of 2017 so far.

Unless you’ve been living under a rock, mostly everyone should know the plot of the film by now. A vagrant woman (Hattie Morahan) puts a curse on a Prince who turns her away when seeking shelter. The Prince (Dan Stevens) turns into a hideous beast and the inhabitants of his castle take on the lives of inanimate objects as a result of the curse.  The Beast is given an enchanted rose in which the only way to break the curse is for him to find true love before its last petal falls.

Years later, a young woman named Belle (Emma Watson) lives in a nearby French village. Her father, Maurice (Kevin Kline), embarks on a trip to sell his trinkets when he wanders off his route and ends up imprisoned in the Beast’s castle. Belle goes looking for her father and takes his place as the Beast’s prisoner. From here, seeds are slowly sown for a budding relationship between Belle and the Beast. 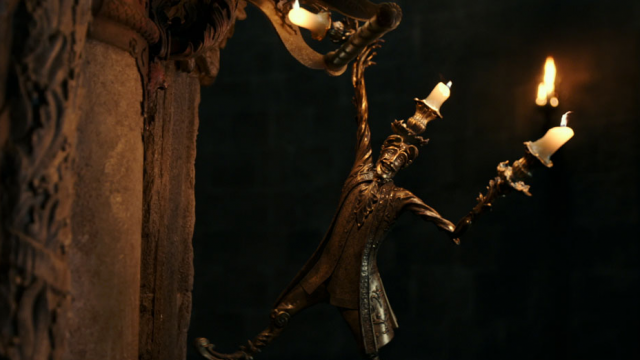 The cast for the film is fantastic from top to bottom. Along with the aforementioned Watson, Stevens, Morahan, and Kline, are big name actors like Ewan McGregor, Sir Ian McKellen, Emma Thompson and Stanley Tucci. McGregor specifically stands out as charismatic candelabrum, Lumière. He’s able to embrace the essence of the animated character while not feeling like a carbon copy. Luke Evans as the villainous Gaston is fantastic as well. Yet, McKellen as the mantel clock, Cogsworth, was a tad bit disappointing. He’s fine in the role but it seems like he doesn’t have much to do all that often. When we originally discussed the first full trailer, we stated that the inanimate object characters came off somewhat creepy. However, after seeing the film in full, they fit in perfectly with the look and feel while also feeling like tangible items despite being computer generated.

Much of the magic in Beauty in the Beast has to do with its wonderful sets. It’s unclear how much CGI was used to design the locations but that’s a good thing. Everything mostly looks and feels entirely real and the filmmakers know it. The camera frequently swirls around the rooms of the castles giving audiences an in depth look at the work put into the film. The castle is ornate and beautiful while also having a feeling of tragedy to it due to the effects of the curse. In addition, the costuming is quite breathtaking as well. Many of the iconic costumes from the 1991 film are recreated here. Former Oscar winner, Jacqueline Durran, is the costume designer of the film. It’d be surprising if she’s not nominated at next year’s Academy Awards for her work on the film.

Also contributing to the warm tone of the film is the music. It was uncertain how a live action adaptation of the film would handle the prodigious soundtrack of its predecessor. Know that this new version of Beauty and the Beast is a full fledged musical and it’s a great one. All of the iconic songs are back and better than ever. Songs like “Belle,” “Gaston,” and, especially, “Be Our Guest” are big productions and absolute joys to watch. Emma Thompson also does a decent job singing the award winning title track. It’s important to note that Alan Menken, who wrote the score for the animated film, returned to compose new music and score this film. Luckily, the old songs don’t feel like rehashes of the past versions and seem to have new life. 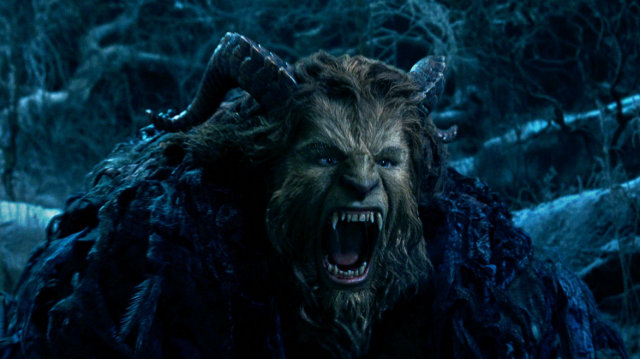 While almost everything about Beauty and the Beast is positive, there are two minor complaints. Both happen to stem from the Beast. The character in general is done very well and convincing as a tragic figure. The biggest problem with him is with his CGI face. Originally, the filmmakers were going to have Dan Stevens in complete prosthetic makeup and costume. Unfortunately, a change was made in post-production to have a digitally created face instead of the prosthetic. The final version of the Beast we see is a full body suit with digital face and it definitely looks like it. It’s not horrible looking but it’s certainly noticeable. The other issue is with the Beast’s singing voice. It feels too polished and unnatural for his look and the sound of his speaking voice. Again, it doesn’t break the film but it’s cringeworthy at times.

Ultimately, if you’re a fan of the animated classic, you’ll be right at home with this version. It’s a surprisingly faithful remake that embraces its past as opposed to shunning it. In many instances, remakes try to distance themselves from their predecessors in some way. With Beauty and the Beast, that’s not the case. Disney clearly knows what they have in the animated film and did exactly what they needed to do. They assembled a fantastic cast and crew that recreates the best moments from the cartoon in live action. Like The Jungle Book, Beauty and the Beast is a technically impressive film with excellent performances from its cast. It’s faithful to the animated classic while also feeling like its own entity. Overall, Beauty and the Beast is a worthy addition to the Disney library and worth seeing on the big screen.