The 1980’s were quite a time for horror cinema. While the 1970’s brought about the birth of iconic slasher movies and the 80’s continued this trend, the slasher subgenre isn’t the only noteworthy thing about horror from the decade. The 80’s also provided some amazing creatures and special effects. From films like The Evil Dead to Alien to Predator, special effects soared to new heights and most of them are still impressive to this day. Among these effects-driven horror films, there are a handful of remakes that arguably trumped their predecessors due to their monstrous, gross-out moments. Chuck Russell’s 1988 film, The Blob, is one of these underrated horror classics that seems to often be forgotten.

The film is a remake of the 1958 sci-fi horror film of the same name. It was about an alien entity that crash landed on Earth that grows larger by consuming everything in its path. The film marked the first starring role for a young Steve McQueen and is known for being a satisfying B-movie experience. The 1988 remake followed two other sci-fi horror remakes of 50’s films in 1982’s The Thing and 1986’s The Fly. Similarly, The Blob focused on wowing audiences with its stunning practical effects and bombastic 80’s action set pieces. The film was written by Chuck Russell, of A Nightmare on Elm Street 3: Dream Warriors fame, and Frank Darabont who would go on to write and direct both The Shawshank Redemption and The Green Mile. Darabont would also develop AMC’s The Walking Dead.

The Blob opens with a football game where Paul Taylor (Donovan Leitch Jr.) asks out cheerleader Meg Penny (Shawnee Smith). Bad boy biker Brian Flagg (Kevin Dillon) chases after a transient (Billy Beck) who gets a mysterious, gooey entity stuck on his hand after a meteorite crashes nearby. Paul hits the transient with his car where the three teenagers race him to the hospital. Soon, Brian discovers that the lower half of the man’s body melted and the entity is gone. Here, the blob begins consuming everything in its path as it reeks havoc on the city of Arborville, California.

Unlike the aforementioned remakes of The Thing and The Fly, the plot for The Blob is pretty standard. The other two films actually give their stories some time to develop before descending into complete insanity. With The Blob, it basically just goes for it. The only thing gradual is the increased size of the monstrous title creature as it seemingly devours and dissolves all of its victims. The lack of plot development isn’t necessarily a bad thing as the story works perfectly fine as is. It’s a movie about a blob that eats people. What else do you really need to know? 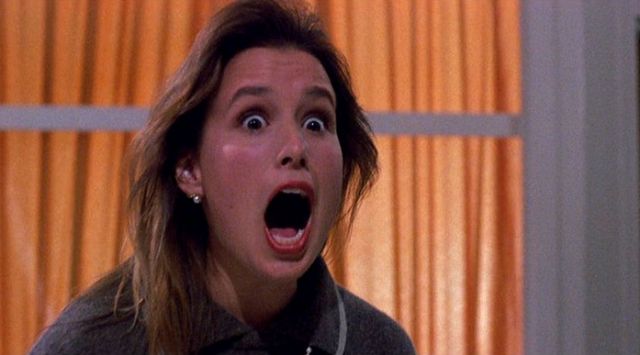 When it comes to the characters, there’s nothing overly special to talk about but everyone does a pretty good job. There are actually some recognizable names here too. Kevin Dillon may be more well known for being Matt Dillon’s younger brother than for his acting. Though, his most memorable role came as Johnny “Drama” Chase on HBO’s Entourage. He also had a big role as drummer John Densmore in 1991’s The Doors. Shawnee Smith has had more staying power in the horror genre as Amanda Young from the Saw franchise. Both Dillon and Smith are solid throughout The Blob and good enough to keep you interested in their characters. Jeffrey DeMunn, of The Walking Dead fame, has a small and nearly unrecognizable role as the town sheriff as well. It’s strange how horror characters in the 1980’s are always somehow able to stand out when modern characters tend to feel like cannon fodder in every new release. New horror usually focuses more on death and jump scares instead of just telling a good overall story.

However, no one is really going into a film called The Blob for the character development. Horror fans want to see some awesomely disgusting kills and The Blob offers them up in spades. Yes, the idea of a giant pink mass of goo is kind of a dumb idea for a villainous creature but Tony Gardner and his special effects team do a fantastic job making the creature come to life. As we’ve discussed previously in past horror reviews of both The Thing and The Fly, practical effects are the way to go. It’s no different for the 1988 version of The Blob. The gelatinous pink monster of the film oozes, bubbles, expands, and attacks as it envelops and dissolves its prey with mere contact. With the premise of the film being so ridiculous, it’s amazing to see how dedicated the filmmakers were to making the monster feel real. Like The Thing and The Fly, the special effects need to be seen to be believed. The film is chocked full of 80’s practical effects at their very best. Every time the blob kills someone, it’s nothing but pure joy. 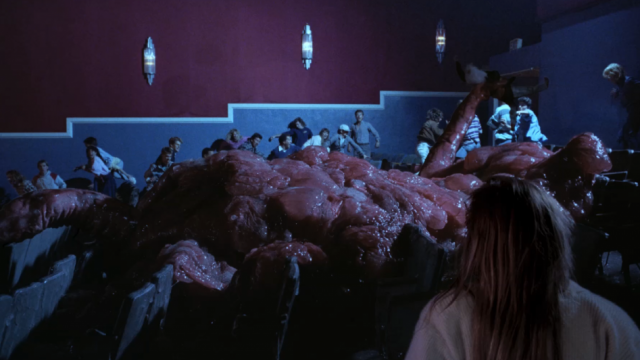 That’s not to say that all of the effects hold up very well though. For the most part, they’re spectacular. Though, the scenes where the blob is attacking a large amount of people tend to look a little fake. There seems to be some very obvious compositing effects like in the scene pictured above. While it’s hard to fault the film for trying some ambitious ideas, they still need to be mentioned here. The other main detractor for some modern horror fans will be the copious amounts of 80’s cheese throughout The Blob. From Kevin Dillon’s stereotypical tough guy, the conspiracy plot, and the film’s overall sense of fun, it can feel cheesy at times. Again though, the film is about a killer blob. What else would you expect?

What people should focus on is what The Blob is and not what it isn’t. It isn’t a horror masterpiece like The Exorcist or The Shining nor does it try to be. It’s not even on par with its aforementioned special effects brethren when it comes to story and execution. Instead, it’s a ridiculously entertaining horror experience that’s not afraid to have fun with its gross-out special effects work. Other films of the time period may be more fondly remembered but The Blob has rightly discovered a cult audience over the years. If you’re looking to have a little fun with your horror this Halloween season, you can’t go wrong with The Blob.