Some of you may remember that we reviewed Clive Barker’s Hellraiser last October. Well, this year we’re including another Barker-inspired work. While the film wasn’t directed by him this time around, it certainly feels like a spiritual successor to Hellraiser. Bernard Rose mans the director’s chair for 1992’s underrated supernatural gore-fest, Candyman.

The film is an adaptation of Barker’s short story, The Forbidden. Though, the film is set in Chicago as opposed to England in the novel. It went on to spawn two sequels, Candyman: Farewell to the Flesh and Candyman: Day of the Dead. Neither sequel lived up to the quality or expectations of the original and the latter film was a direct-to-DVD release. Here’s a fun fact. Farewell to the Flesh was directed by Bill Condon who most recently helmed this year’s Beauty and the Beast. So, there’s that.

Candyman stars Virginia Madsen as graduate student Helen Lyle. Helen and her friend, Bernadette (Kasi Lemmons), are writing a thesis on urban legends. Helen is told the story of Candyman, a killer whose victims say his name into a mirror five times to summon him. He has a hook for a hand and supposedly terrorizes the Cabrini-Green housing project in Chicago. Upon hearing this, Helen says his name five times into her mirror with Bernadette as a witness. The two then visit the apartment of a woman who was murdered at Cabrini-Green. Here, they meet Anne-Marie (Vanessa Williams) and, later, a young boy named Jake (DeJuan Guy). Helen soon finds herself tangled in a web of violence, murder, and the supernatural all in the name of Candyman.

While we don’t want to give anything away, the plot is easy to follow but there’s a lot of misdirection. You never really know if Helen is responsible for the crimes that she’s accused of. Much of the violence occurs offscreen despite the large amounts of gore. The other characters, such as her husband, Trevor (Xander Berkeley), aren’t entirely sure what to think of her after the more grisly events. Even Helen herself is kept in the dark as to how the murders play out. The way the film is put together is extremely effective and always keeps you guessing. 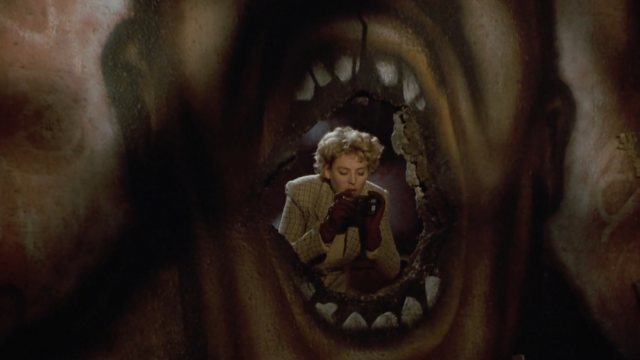 Unlike many horror films, the acting is top notch across the board in Candyman. Virginia Madsen is excellent as a strong-minded heroine whose mind and will deteriorate over the course of the film. You’re with her every step of the way. The supporting cast is also great. Every one of the characters offers a different wrinkle to the overall story and no one feels inconsequential. The star of the film, though, is obviously Tony Todd as the title character. Like Doug Bradley as Pinhead in Hellraiser, Todd has a haunting presence onscreen. He can be terrifying yet comforting all at the same time. All the while, his calm and dignified tone mixed with his thirst for blood makes him a suitable foe for Helen.

Speaking of bloodthirst, there’s plenty of gore to go around for any fan of the genre. It takes about 45 minutes for the film to kick into high gear but, from there, the time flies by. Once again, like Hellraiser, this is a brutal and bloody film. Even when all you’re seeing is blood, there’s so much of it that it’s still unsettling. During the opening moments, Candyman explains how he guts his victims “groin to gullet” and that’s no lie. This movie isn’t for the weak at heart if you’re not a fan of blood and guts. The gore isn’t constant but the scenes that do include it more than make up for the scenes without. As usual, the practical effects used trump the standard usage of CGI that we’ve become accustomed to today.

While Candyman is a truly engrossing horror experience, it’s not quite as good as Barker’s previous adaptation. Much of that has to do with the film’s ending. Of course, the famous scene with the bees is an amazing spectacle especially since Virginia Madsen is allergic to them. However, the ending is just a little goofy. Obviously, we’re not going to spoil it here but much of what happens during the film’s climax goes relatively unexplained. It fits with the rest of the film’s tone but something seems slightly off. On one hand, the ending works enough but, on the other, there could’ve been a better resolution.

Even with a somewhat wonky ending, Candyman is still an excellent horror film. Between its strong characters, satisfying levels of gore, and a wonderfully nuanced performance from its villain, the film is everything you could want from the genre. It’s not quite on par with some of the heavy-hitters of the slasher genre like Halloween or A Nightmare on Elm Street but it has definitely earned its spot in horror history. Ultimately, Candyman is an awesomely gory and underrated experience worthy of a watch from any horror fan.

One Thought to “ICYMI Review: Candyman”