With the multitude of films that are released every year, sometimes one just falls through the cracks. Today, we’re reviewing Drew Goddard’s The Cabin in the Woods just in case you missed it…

While the horror genre is often considered to be all about “scary movies,” there are a few instances where that’s not entirely true. Sometimes horror is more about the use of excess to entertain viewers. Directors like Sam Raimi and George Romero often avoided standard horror tropes used to scare viewers and instead focused on special effects and even comedy. Still, films like The Evil Dead, Dawn of the Dead, and Drag Me to Hell are considered to be horror. The same can be said of the 2012 film, The Cabin in the Woods.

In name, The Cabin in the Woods sounds like like your standard horror fare. A dark, musty cabin in the middle of nowhere is the perfect place for something terrifying to happen. However, writers Joss Whedon and Drew Goddard crafted an extremely clever and self aware script that capitalizes on all the famous horror cliches while also turning them on end.

The film starts out as standard as possible with a group of five friends, all with their own distinct personalities, staying at a deserted cabin. After they arrive, supernatural occurrences begin happening and the friends must band together to save themselves. This is the superficial version of the events. Behind the scenes, there is a facility filled with technicians who control the environment and occurrences from a bunker. The friends are unaware of their existence yet the choices that they make decide their eventual fate.

The technicians also manage a type of prison that holds different types of monsters that are all potential threats to the friends. After reciting an incantation in the cellar of the cabin, one of the main characters, Dana (Kristen Connolly), releases the sadistic, zombified, redneck family, the Buckners. Of course, this is a direct nod to The Evil Dead in which nearly the exact same event happens to set that film’s plot in motion. 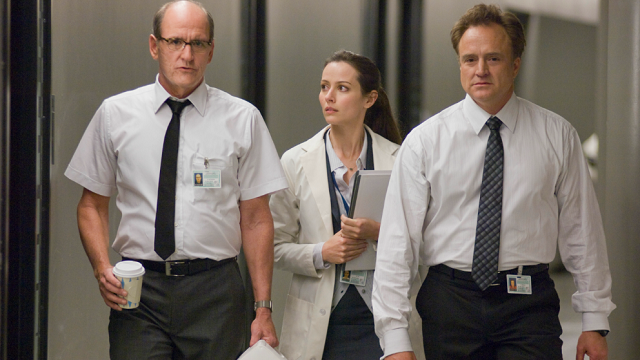 Without seeing the film, it’s somewhat difficult to describe all the goings-on. Similar to a film like The Hunger Games, the cabin is surrounded by an invisible barrier in which the technicians have total control. For instance, they influence the events by pumping pheromones into the area to cause the characters to change their minds from sticking together to splitting up to survive the Buckner family. There’s another typical horror cliche of characters dropping a weapon after thinking the killer to be dead. In The Cabin in the Woods, the technicians cause a quick electric shock to a character’s hand to cause the drop. These are the subtle details that totally make the film. Whedon and Goddard seemingly have a response to every eye-rolling moment that has become commonplace in horror today.

The cast itself is quite good. Alongside Connolly, the rest of the friends include Chris Hemsworth, Anna Hutchison, Fran Kranz, and Jesse Williams as Curt, Jules, Marty, and Holden respectively. They all satisfy their specific character stereotype used often throughout the genre. The two lead technicians are played by Richard Jenkins and Bradley Whitford who both have some great comedic timing with the delivery of their lines. To them, the deaths of the group at the hands of the Buckners are all a big game. They treat the events as if they’re their own personal horror film. They react on film as a normal viewer would react in a theater. 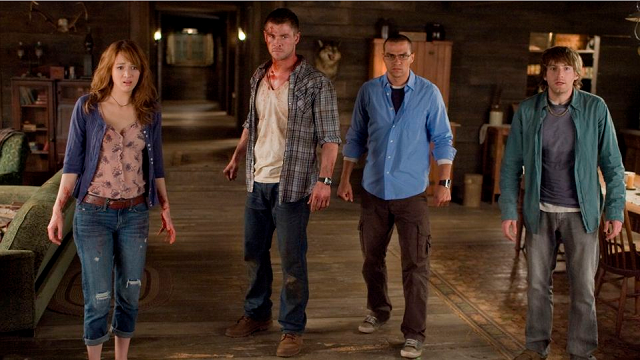 If there’s one criticism to make about the film, it’s that a lot of the best parts are saved for the climax. The early portion of the film is a little too by-the-numbers. While this is definitely intentional due to the excessive gore and insanity of the film’s climax, a generic zombie story leaves the inciting incidents a little bland. This is especially true once you get to see the other monsters at work later on. The merman especially is awesome and Bradley Whitford’s characters mentions him frequently beforehand.

That being said, The Cabin in the Woods is definitely a must-watch if you’re a horror fan. It’s not really scary by any means but it’s a spoof of the genre in general. In theory, it’s similar to Scream in that it calls attention to all of the usual horror tropes and plays by the rules of the genre while also parodying them. It’s often humorous, gory, and ridiculously clever but still very horror. The Cabin in the Woods is truly hard to describe yet it must be seen to be understood and believed. If you’re a fan of the horror genre, this film is an absolute necessity.