By the time 1987 arrived, countless horror classics had already been released. Night of the Living Dead, The Exorcist, Halloween, A Nightmare on Elm Street, and numerous others shocked and thrilled audiences with their respective spins on the genre. They all offered a little something new and furthered expectations. On top of that, many popular franchises had started to pump out an endless supply of sequels. Therefore, when Clive Barker’s Hellraiser finally hit theaters, it was something different and fresh yet captured the best parts of all things horror up to that point.

Barker’s film was an adaptation of his own novella, The Hellbound Heart. He wrote the screenplay for the film version although there are some differences between the two. Hellraiser was also Barker’s first foray in the director’s chair and, just like his film, he exceeded expectations. The film is gory and disturbing while also being chillingly beautiful and sophisticated. It’s a strange mix of styles that results in a perfect storm of horror gold.

The film follows a group of characters who all have their own roles to play in the events that transpire. Frank Cotton (Sean Chapman) is a pleasure seeker who solves a puzzle box that opens a metaphorical doorway of pain and suffering. The Cenobites, headed by their dignified leader, the Lead Cenobite, or Pinhead as he’d be known as later in the franchise, played by Doug Bradley, come to take Frank back to Hell.

After Frank’s brother, Larry (Andrew Robinson) and his wife, Julia (Clare Higgins), move into the house Frank had been staying at, Larry suffers an accident in which his blood drips onto the floor and resurrects Frank as a skinless monster. Julia, who previously had relations with Frank, agrees to help him. She lures men to the house and allows Frank to consume them to regenerate his body. Meanwhile, Larry’s daughter, Kirsty (Ashley Laurence) discovers Frank. Then, she eventually makes a deal with the Cenobites to return him to them. 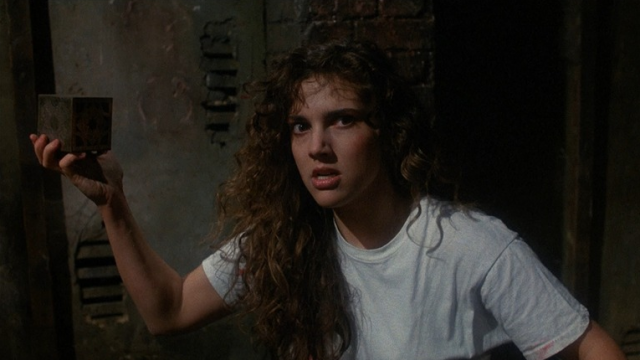 There’s a lot of moving parts of the film but it really isn’t hard to follow. Barker does a great job of showing viewers how each event gets to its boiling point and how the characters all use each other. For the most part, Hellraiser is much more about the people than it is about monsters. Yes, Skinless Frank looks and acts like a monster but, having escaped the Cenobites, he’s trying to appear human once again. Kirsty and Larry are the two most likable characters of the film and remain innocents throughout the plot. Kirsty stumbles upon the puzzle box to summon the Cenobites on total accident yet pays a dear price for it.

The true villains of the film are Frank and Julia. Most would assume that Pinhead and his crew are the main antagonists but they are merely intermediaries. They don’t seek victims even if they’re more than willing to take them. It’s people like Frank that search for them. Pinhead himself is eloquent, impartial, and somewhat aristocratic. Again, the Cenobites oblige the pleasure seekers that come looking for them. It’s not the other way around.

The best thing about Hellraiser is its usage of gore. Like David Cronenberg’s The Fly, Hellraiser can be lumped into the body horror sub-genre. There are some gruesome depictions of mutilation as a form of enjoyment by the characters. The most obvious example of gore is Skinless Frank. As the body count rises, Frank’s bones, muscles, and soft tissue regenerate. The practical effects used in this film are unbelievable. Blood and slime constantly drip off of Frank’s body which is just awesomely disgusting. A simple word of warning to not eat during this film should be taken seriously. 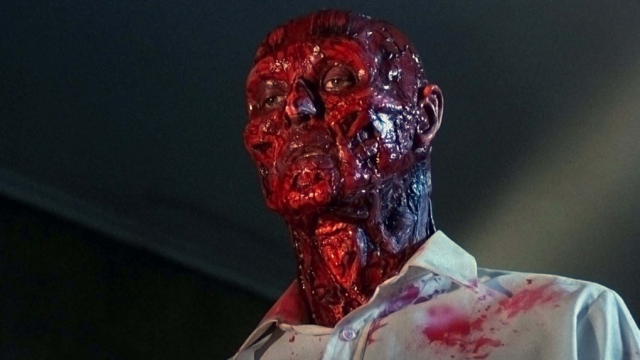 Another highlight of the film is Christopher Young’s score. Originally, Barker wanted the electronic group, Coil, to do the soundtrack but producers insisted on Young. He had previously scored A Nightmare on Elm Street 2: Freddy’s Revenge. There’s a recurring recognizable theme in the music. While it may not be as iconic as the themes from The Exorcist or Halloween, it’s distinct in its own right and has a gothic feel that fits perfectly with Barker’s terrifying imagery and unnerving plot. When you hear the theme, it’s a certainty that something awful is on its way.

While Hellraiser certainly isn’t perfect, its issues are quite minor. There’s some choppy editing that could be cleaned up a bit. Also, while the practical effects are excellent, there are some hand drawn effects towards the end of the film that are kind of hokey for the time. In all fairness to Barker, though, funds were extremely limited so he and a “Greek guy” supposedly consumed large amounts of alcohol and animated the scenes over one weekend.

Hellraiser isn’t often noted as a franchise on par with Halloween, Friday the 13th, and A Nightmare on Elm Street in terms of popularity. However, Pinhead is one of the most recognizable horror characters of all time. In fact, his inclusion in the film spawned eight sequels all of which, except for Hellraiser: Revelations from 2011, feature Doug Bradley in the role. Unfortunately, the majority of the sequels are extremely different than Barker’s original film. Nonetheless, even with its faults, the original Hellraiser is a horror masterpiece. It’s psychologically damning, purposefully gory, and shows just how easily humans can be bigger monsters than the real ones themselves.