There was a time when writer/director Robert Rodriguez was synonymous with the action genre. With films like Desperado, Sin City, and Planet Terror on his resume, it’s not hard to see why. Rodriguez approached action scenes in a fantastical way which made them somewhat awesomely over-the-top. Other films like From Dusk Till Dawn and Machete often bordered on insanity but, again, there was just something that worked about Rodriguez’s approach to the genre. In recent years, the filmmaker’s name hasn’t been nearly as prevalent as it once had been. The last feature film he directed, the long awaited sequel, Sin City: A Dame to Kill For, was released back in 2014. While Rodriguez has dabbled in television and short films since then, he finally returns to the big screen with Alita: Battle Angel.

The film is based on the Japanese cyberpunk manga series Gunnm AKA Battle Angel Alita. The series was created by Yukito Kishiro and ran from 1990 to 1995. Like a number of adaptations, Alita: Battle Angel has been a long time coming. Legendary filmmaker James Cameron had kicked around the idea of making the film since around 2000. Ultimately, though, the project took a back seat to Cameron’s eventual 2009 film, Avatar. Dormant for years, Rodriguez finally joined the production in 2015 while Cameron dropped into a producer’s role alongside Jon Landau. Rodriguez, Cameron, and Laeta Kalogridis all ended up with screenwriting credits on the final product.

Alita: Battle Angel opens in the year 2563 following a catastrophic war known as “The Fall.” Doctor Dyson Ido (Christoph Waltz) discovers a disembodied cyborg girl with her brain fully intact. He returns to his lab and rebuilds her. When the girl comes to, she has no recollection of her past. Nonetheless, Ido takes her in and names her Alita after his deceased daughter. One night, Alita (Rosa Salazar) notices that Ido is injured and later follows him to see what he’s up to. She discovers that Ido is a Hunter-Warrior, a licensed bounty hunter, and instinctively defends herself against a group of cyborgs, led by Grewishka (Jackie Earle Haley), trying to attack her. She also befriends a local boy named Hugo (Keean Johnson) and takes up the cyborg sport of Motorball in an attempt to send him to the desirable city of Zalem in the sky. Alita sets out to learn of her true identity while dodging a bounty put on her by Vector (Mahershala Ali), a Motorball promoter, and the mysterious villain, Nova.

If you can’t tell from the plot description alone, there’s way too much going on in Alita: Battle Angel. On the surface, the film is an origin story but it tries to play as if it’s more than that. For anyone not familiar with the manga, it’s likely that the story isn’t going to fully resonate. What’s most maddening about this is that each of the ideas focused on aren’t difficult to understand. It’s just that none of them ever have enough time to fully develop. Initially, you’re interested in the background of Alita. Then, the relationship between her and Hugo begins and Motorball is introduced. Quickly thereafter, Ido’s night job as a Hunter-Warrior comes about. This is all while the history of the world after The Fall goes mostly untold. Instead of having so many different things hastily cobbled into one film, a greater focus on one or two ideas would’ve worked better to engross newcomers into the world of the series. 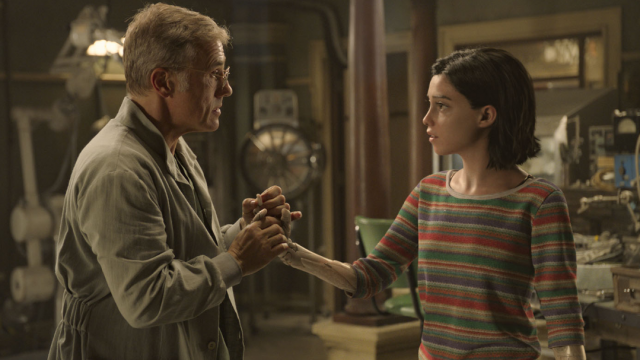 The performances in the film have their ups and downs as well. The relationship between Rosa Salazar’s Alita and Keean Johnson’s Hugo is the most questionable. While Salazar excels in her role (more on that shortly), Johnson is just there. There’s very little chemistry between the two and Hugo is as stock as a character can come. As ascendant a talent that Mahershala Ali is, he’s given very little to work with as the character of Vector. Coming off an Oscar win for 2016’s Moonlight and landing an additional nomination for this year’s Green Book, it’s a shame that the film didn’t better capitalize on Ali’s versatility. Jennifer Connelly also has a role in the film that goes mostly forgotten for the majority of the film’s runtime. All is not lost, though, as both Salazar and Christoph Waltz are an excellent onscreen duo. There’s immediately a father-daughter vibe between them and there are a number of touching scenes. While the acting across the board isn’t bad per se, Salazar and Waltz drive the story of Alita: Battle Angel.

Of course, it’s unlikely that audiences are going into the film expecting to be blown away by the story. The film’s special effects bring to mind other recent CGI heavy films like Valerian and the City of a Thousand Planets, Blade Runner 2049, and Aquaman. It also feels slightly reminiscent to District 9 and Netflix’s sci-fi show, Altered Carbon. The fight scenes between Alita and the other cyborgs are fantastic. Some of the most impressive work comes in the form of the Motorball games though. The participants fly around a track while slamming into and attacking one another. The special effects team do a wonderful job making it into a spectacle and constant eye candy. What Alita may lack in storytelling is made up tenfold in its visual style. 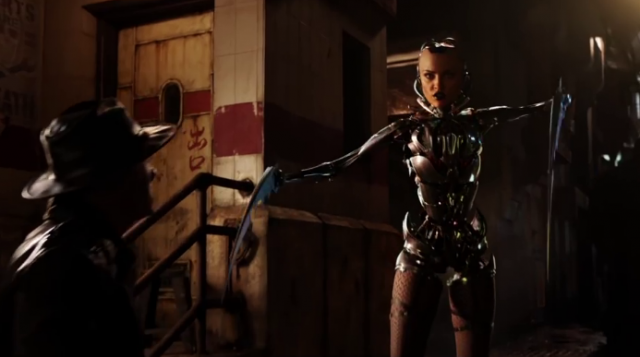 The effectiveness of the film’s special effects and its visual style in general is also a testament to director Robert Rodriguez. Throughout his entire career, Rodriguez has released visually breathtaking films and, obviously, Alita: Battle Angel is no different. Whereas other action films have received flak on this site for constant shaky cam and schizophrenic editing techniques, Alita does an excellent job letting its viewers actually watch the action onscreen. Directors like Paul Greengrass with his Bourne films and, more recently, the Russo brothers and their Marvel films have had issues letting scenes breathe. A lot of time is spent perfecting the action and Rodriguez excels at showcasing these scenes for his audiences. Again, this is something that the director has triumphed at for his nearly thirty year career.

Despite its stunning CGI and action scenes, though, Alita: Battle Angel just misses the mark with its confounding story. It was truly tough to rate this one as it’s actually entertaining. Yet, the messy plot is simply unforgivable. Somewhere in its two hour runtime is a solid piece of action cinema. As it is, it will be more of a question of “what could’ve been?” It brings to mind 2017’s Ghost in the Shell, another film adaptation of a popular manga series. Both deal with future time periods, cyborgs, memory loss, and bombastic action scenes. Both films have similar positives and negatives but Alita: Battle Angel feels like it’s trying to walk before it can crawl. A lot of time is spent building up possible future installments instead of delivering a cohesive initial experience. Again, you won’t be bored with the film but it doesn’t take long to realize there are some serious missed opportunities throughout.