When it comes to cinematic universes, there’s only one game in town: Marvel. Yet, that hasn’t stopped a number of pretenders from taking a page out of Marvel’s book and attempting to create their own version of the MCU. Of course, there’s the DC Extended Universe that seems to have gone by the wayside after many failures. Then there was Universal’s Dark Universe which quickly began and ended with 2017’s The Mummy. While there are a handful of others of note, there’s only one that seems to continue pumping out films at the rate of Marvel. Last week, Annabelle Comes Home, the seventh(!) film in The Conjuring universe, hit theaters. Though, it may be a sign that this series and universe is on its last leg.

Annabelle Comes Home opens with a scene originally from The Conjuring where Ed (Patrick Wilson) and Lorraine Warren (Vera Farmiga) take the Annabelle doll from two women suffering from supernatural occurrences. After experiencing issues of their own on the way home, the Warrens lock Annabelle away in a glass case and have it blessed by Father Gordon (Steve Coulter). One year later, the Warrens leave to tend to another case while they leave their daughter, Judy (Mckenna Grace), home with her babysitter, Mary Ellen (Madison Iseman). When Mary Ellen’s friend, Daniela (Katie Sarife), discovers who Mary Ellen babysits for, she insists on snooping around the Warrens’ home and, specifically, their haunted artifacts room. Daniela weasels her way into the room and unleashes the evil of Annabelle and others upon herself, Mary Ellen, and Judy. 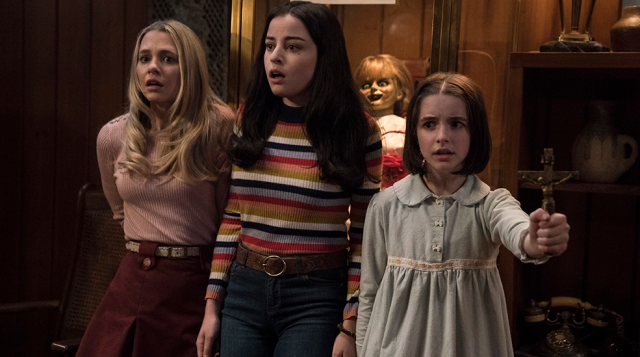 Frankly, the plot of Annabelle Comes Home doesn’t matter because there really isn’t much of one. Sure, there are some inciting incidents that get the characters to let Annabelle loose but that’s it. Each of the three main characters have extremely minor subplots but never anything of much substance. Mary Ellen likes a boy from school but their romance doesn’t really add anything to the story nor will viewers care one bit about them getting together. This is Judy’s third go-round in The Conjuring universe and she’s basically a young version of Vera Farmiga’s Lorraine. Daniela probably has the most interesting character arc but even that isn’t of much significance by the film’s end.

For the most part, the film lives and dies by its scares. In this regard, Annabelle Comes Home is extremely lazy and unoriginal. The film has the girls taking turns walking around a dark house and getting scared of “stuff.” Yes, the dreaded stuff we like to address here on Cinema Smack. The strangest thing about this film is that the Annabelle doll seemingly has very little to do with the horror that the characters experience. The film throws so many indiscreet jump scares at the audience and completely whiffs on delivering an eerie and/or interesting Annabelle experience. Instead, viewers will find themselves struggling to find something of note to focus on in pitch black scenes before being annoyingly shined in the face with various bright lights. The only way someone will appreciate Annabelle Comes Home is if they like jump scares. A lot of jump scares. For others, though, jump scares don’t make a horror movie and this film, in particular, is lacking entirely in substance. 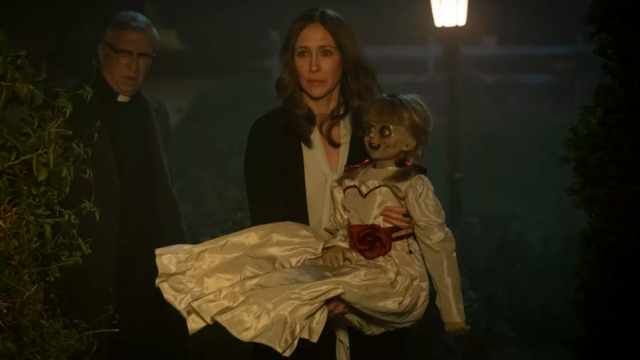 There’s only one thing that’s remotely commendable about Annabelle Comes Home and that’s its cast. Surprisingly, all of the actors do a great job in the film despite being given virtually nothing to work with. Patrick Wilson and Vera Farmiga stop by for a cup of coffee and, upon their departures, make you wish you were watching a new Conjuring film instead. Meanwhile, Madison Iseman, Katie Sarife, and Mckenna Grace are all quite charming in their roles. Surprising as it may be, they’re actually likable throughout the film. It’s saying a lot that something can still be as bad as Annabelle Comes Home when it has some very solid performances. This is especially true in horror.

That’s really all there is to Annabelle Comes Home. It’s a bad film. In fact, it’s a terrible film. If your expectations are to see images projected onto a screen and mixed with sound, the film does its job. Other than that, it fails at every conceivable level. There have been some stinkers within The Conjuring universe, such as the original Annabelle, The Nun, and The Curse of La Llorona, but Annabelle Comes Home takes the cake. Writer Gary Dauberman has been responsible for some poor entries in this universe and he saved the worst for his directorial debut here. Again, if you’re someone who likes constant jump scares, you may not hate Annabelle Comes Home. Though, if you’re looking for a unique horror experience and some of the magic of the flagship series, you’d best look elsewhere.