Do you know what’s really odd? There are currently no upcoming films announced for the Marvel Cinematic Universe. Yes, there are release dates and an intended Black Widow movie on the horizon but fans have no idea what’s next for the MCU. This is the first time in eleven years that that has happened. Honestly, it’s kind of a relief. Marvel wrapped up its Infinity Saga with Avengers: Endgame back in April and it feels like a good time to recharge the batteries. As has been mentioned numerous times, Marvel has done something truly unique with their shared universe but, perhaps, productions should be scaled back with a more grounded focus for at least a little while. With Marvel Studios and Sony’s newest release, Spider-Man: Far From Home, there’s some of that but the film also sets an eye towards the future as well. Before going any further, know that there will be spoilers from Endgame in this review.

Far From Home is the third second movie in the Spider-Man franchise. Of course, Sam Raimi set the bar high with the first two films of his trilogy before a spectacular crash back to earth in Spider-Man 3. Then, Marc Webb got a chance to resurrect the character in 2012’s The Amazing Spider-Man before the run-before-you-walk attempt that was The Amazing Spider-Man 2. Sony, who owns the cinematic rights to Spider-Man, then partnered with Marvel to get the webslinger into the Marvel Cinematic Universe. Tom Holland successfully debuted as Peter Parker in 2016’s Captain America: Civil War before getting a solo run in the following year’s very solid Spider-Man: Homecoming. Holland’s Spidey played a big role in Avengers: Infinity War before getting snapped out of existence but made a welcome return in Endgame. Now, director Jon Watts gets a second go-round to hopefully not flame out as his two predecessors did.

Spider-Man: Far From Home opens in Ixtenco, Mexico where Nick Fury (Samuel L. Jackson) and Maria Hill (Cobie Smulders) investigate an oncoming storm. An Elemental arises and is successfully destroyed by a superpowered man named Quentin Beck (Jake Gyllenhaal). Fury, Hill, and Beck team up to locate and destroy the rest of the Elementals based on Earth, Water, Air, and Fire. Back in New York City, the Midtown School of Science and Technology restart their school year due to “The Blip” AKA the snap that wiped out half of life in the universe. Peter Parker (Holland) and his class are set to go on a two week trip to Europe where Peter intends to tell MJ (Zendaya) about his feelings for her while leaving any hint of Spider-Man back at home. Happy Hogan (Jon Favreau), who seems to have a budding romance with Peter’s Aunt May (Marisa Tomei), tells Peter that Nick Fury will be attempting to reach him. Instead, Peter ignores Fury’s phone calls and leaves for Europe with his class.

They arrive in Venice where the Water Elemental attacks. Peter intervenes and is soon tracked down by Nick Fury. Fury gives Peter some high tech glasses, which contain the artificial intelligence program, E.D.I.T.H. (voiced by Dawn Michelle King) as a parting gift from the late Tony Stark. Peter is then tasked with joining Fury, Hill, and Beck to stop the other Elementals. Despite Peter’s refusal, Fury reroutes Peter’s school trip to locations where he needs Spider-Man’s assistance. Beck claims to be from an alternate universe where his family was killed by the Elementals and eventually wins Peter over. Spider-Man and Beck, who’s dubbed Mysterio by Peter and his classmates, suit up to eliminate the remaining Elementals as they travel across Europe.

When it comes to the plot of the film, there’s kind of a lot going on. In addition, there’s some spoiler territory that we can’t go into here. The plot is never confusing but there’s just so much to follow. There are a ton of character relationships in Far From Home and the story constantly moves from place to place. The first half of the movie doesn’t really feel like Spider-Man. It’s more like a high school comedy that’s not really that funny (more on that shortly). The European setting is interesting but there are so many times where you just wish it was New York City. Peter frequently mentions how he likes being a “friendly, neighborhood Spider-Man” and it’s in these moments that viewers may start to feel this way too. The MCU is chocked full of films that span across countries, worlds, and universes. Spider-Man is a staple of New York City and we’ve hardly gotten to see Holland’s Spider-Man fully explore the city he inhabits.

Obviously, there will always be room for comedy in a Spider-Man film. Yet, the comedy in Far From Home really misses the mark in a lot of ways. There are many jokes from JB Smoove’s Mr. Dell, a chaperone on the class field trip, and none of them are funny. This is a character that we’ve never seen in a previous MCU film and he just shows up cracking one liners about witches that never land. This was a huge missed opportunity as the filmmakers really should’ve pushed to bring back Hannibal Burress who had some great moments in Spider-Man: Homecoming. Luckily though, the comic relief character, Ned (Jacob Batalon), from the previous film returns but is much more tolerable this time. He’s actually somewhat likable in Far From Home while being one of the worst things about Homecoming.

The first part of this review may seem like a lot of doom and gloom but, thankfully, Far From Home is able to overcome its detractors in a big way. As previously mentioned, the first half of the film may find viewers wondering what they’re watching. However, the film eventually does turn into a classic Spider-Man experience with some breathtaking visuals and fight scenes. There are also things that fans have never really seen in a Spider-Man film before that they’ve been clamoring for. Again, this is some spoiler territory so we’ll leave it vague. Let’s just put it this way, if you’re going into this film with certain expectations, they’ll be met. 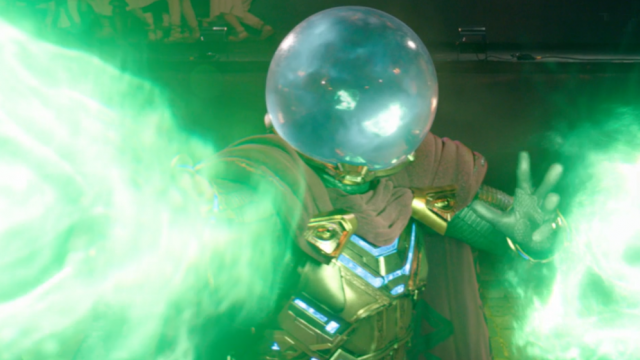 As is always the case, the best thing about Spider-Man: Far From Home, and basically all Marvel films, is its character work. Tom Holland continues to make a case for himself as the definitive live action version of Spider-Man. Zendaya’s MJ is given much more to work with this time around. Although, it seems as if this film relies a little too much on fans knowing of the Peter/MJ relationship from the comics and other films. In Homecoming, MJ reveals her nickname at the end but there’s never really a brewing romance between the two. Then, in Far From Home, there’s a ton of unexplained tension between them out of the blue. On a separate note, Jake Gyllenhaal is excellent as Mysterio. He starts out as kind of a stock character but layers of depth and complexity of the character are gradually revealed to massive success.

When all’s said and done, Spider-Man: Far From Home is a mixed bag but never hits anything resembling a low point. The comedy doesn’t always work and the first half is a bit questionable due to its lack of anything notably Spidey. However, the second half of the film is a barrage of dazzling highs that trump its predecessor. The final action scenes especially are worlds better than Spidey’s showdown with Vulture in Homecoming. Though, it’s that pesky first half that holds Spider-Man: Far From Home back from its full potential. This new film offers up a lot to like and anticipate moving forward but it’s likely that the definitive webslinging experience still lies ahead.