Over the past few years, there have been some amazing science fiction films released. It feels like we praise the genre somewhat often on this site. Even our last two best of the year lists have been topped by sci-fi films. It should be no surprise at this point to say that Alex Garland’s new film, Annihilation, definitely met expectations. It’s easily the best film we’ve seen thus far in 2018.

Garland’s debut feature came in the form of 2014’s Ex Machina. That film saw a young programmer selected to evaluate the qualities of a beautiful and intelligent humanoid robot. Just as with Ex Machina, Annihilation showed Garland’s ability to craft a unique sci-fi experience. Sure, there may be other films that share slight some similarities but Garland’s work is most certainly his own. Although the film is an adaptation of Jeff VanderMeer’s novel of the same name, Garland’s altered version poses many questions that may or may not be answered by the story’s conclusion. This type of approach is refreshing in a time when remakes, reboots, and sequels dominate the release calendar.

Annihilation stars Natalie Portman as Lena, a biologist who volunteers for a secret expedition. Her husband, Kane (Oscar Isaac), is thought to be dead for a year when he miraculously returns home. The two are intercepted on their way to the hospital after Lena discovers that there’s something seriously wrong with Kane. They’re taken to a research facility under the control of Dr. Ventress (Jennifer Jason Leigh) and Kane slips into a coma. Kane had been part of a team that explored an environmental anomaly known as Area X AKA “the shimmer.” In an effort to help save her husband, Lena volunteers to go into the shimmer with Ventress and her team of three additional women. 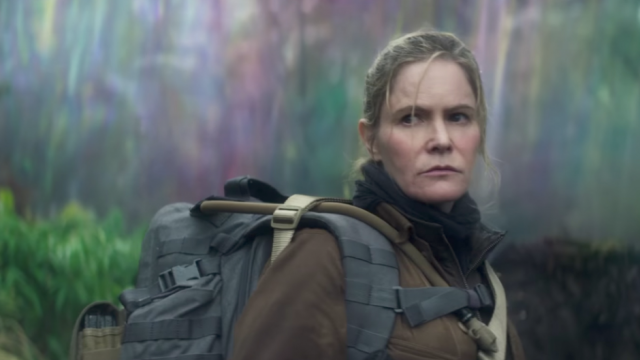 Just about two years ago, we discussed the role of women in film and how Hollywood needs more original strong female characters. There’s definitely no shortage of them in Annihilation. After numerous groups of testosterone driven soldiers are sent into the shimmer, Ventress decides to go with a more scientific approach. Each of the female characters have a specialty that makes them important to the group. As previously mentioned, Lena and Ventress are a biologist and psychologist respectively. Joining them are a physicist, Josie (Tessa Thompson), a paramedic, Anya (Gina Rodriguez), and a surveyor and geologist, Cass (Tuva Novotny). Each woman is unique and, along with their professions, have personal reasons for joining the expedition.

Perhaps the best thing about the film in general is in its setting. No, it’s not set on a different planet. You’re not going to see any crazy extraterrestrials or anything like that. What’s truly unique about the shimmer is how familiar it feels. It encompasses territory on Earth and, as its radius expands, it changes the areas that it takes over. Man-made structures, nature, and even wildlife are affected by the presence of the shimmer. In that respect, what we see onscreen is familiar but also a complete oddity. In execution, these ideas are extremely interesting to see and there’s a completely different world created that’s parallel to our own.

All of these things also affect the tone of the film. While it definitely fits into the science fiction genre, Annihilation is an undeniable thriller at times as well. It even borderlines on being a straight up horror movie. The shimmer is a complete mystery and viewers learn more about it only as the characters do. There really aren’t any instances where you can see something coming before a character does. The plot is never predictable and you’re constantly drawn to the events onscreen. The film is a giant mystery and there’s never a single moment where you’re not invested in what’s happening with the characters. There are some truly spine-tingling moments as well that we won’t ruin here. If you’ve seen the film, you know what these are and they’re arguably more terrifying than ninety percent of the scares in modern day horror. 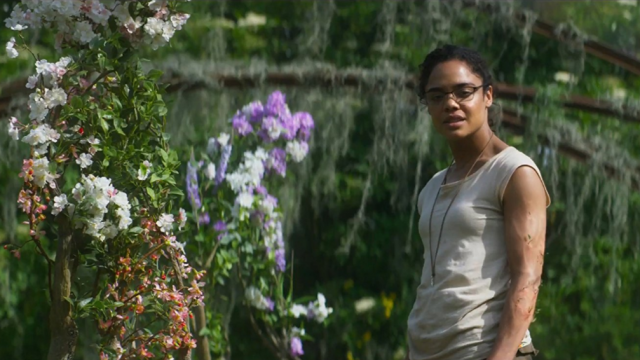 If there’s anything disappointing about Annihilation, it’d be the ending. Obviously, we’re not going to give that away here either and, to be fair, it’s not necessarily bad. In a way, it’s similar to the end of Ex Machina where, after all the buildup, you hope for a better payoff. With this film, the ending will certainly leave you thinking. It simply doesn’t feel nearly as interesting as all of the other strange occurrences going on inside the shimmer. It’s difficult to explain without ruining the ending but it just leaves you wanting a little more in general.

Regardless of our feelings about the ending, Annihilation does not disappoint. Again, the ending isn’t bad per se. It’s just not really what you’d expect and it leaves a lot up to interpretation. Either way, this film is a tremendous achievement for Alex Garland as a director. With only two films, he has proven that he has a knack for a thinking person’s type of science fiction. After Ex Machina, expectations were high for what he released next and, after Annihilation, it’s doubtful that those expectations have lowered whatsoever. At this point, we’re only into the third month of 2018 and have quite possibly experienced the most thought-provoking and fascinating film of the year.

9 Thoughts to “In Theaters Review: Annihilation”