There’s something ridiculously alluring about mixing live action and animation in film. It’s something that you’d never think would work but, when done right, it’s awesome. In terms of animation, we’re not talking about CGI characters like Gollum from Lord of the Rings or the Hulk from the Marvel Cinematic Universe. We’re talking strictly cartoon-style animation. Films like Who Framed Roger Rabbit, Osmosis Jones, and even Cool World have achieved a level of cult status for their style. In addition, classic Disney films like Mary Poppins and Pete’s Dragon are known partly for their animation as well. Thus, it’s great to see the style employed in a short film like Ken Cohen’s Cartoonish.

The film centers on a sullen animator named Harris Greene (Andy Livengood). Harris wanders slowly through a suburb before setting his sights on a specific house. He enters the house without warning and it’s lone inhabitant is a ten year old boy named Garret (Jack Delyra). After assuring Garret that he’s not going to harm him, Harris requests to borrow Garret’s father’s (Michael James Daly) gun.

The first thing that many people will notice is the overall tone of the film. It starts off how one may suspect with chipper music that gives off an air of innocence. That’s about where the positive vibes end though as Cartoonish gets darker with every passing moment. After Harris enters Garret’s home, you assume what Garret assumes: Harris intends to hurt him. Oddly enough, though, Garret also seems very undeterred by his own assumption. It’s as if he almost expected it to happen. The film doesn’t actually go in this direction per se. However, we won’t spoil any of the film’s events here but it should be known that the tone gets much more bleak as the film continues. 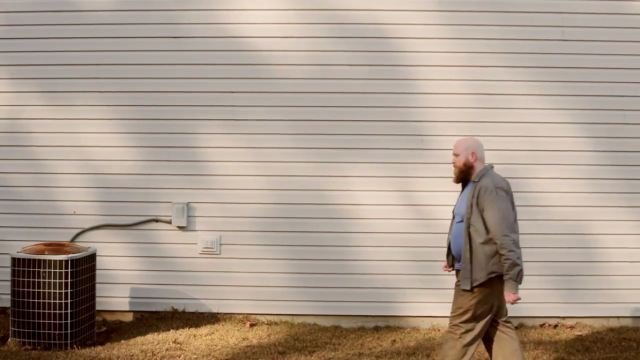 In terms of acting, the film banks on Andy Livengood and Jack Delyra’s respective performances. Both are actually somewhat similar in a lot of ways. The actors give somber performances that fit in with the film’s depressing overall tone. We previously mentioned that Delyra’s is interesting since it seems as if he already expects what’s happening. It’s like he’s looking at a warped future version of himself when he sees Livengood’s Harris. As for Livengood, he’s a bit childish in his own right. After saying that he wasn’t going to harm Garret, he pitches in that Garret should lock his doors in case someone does want to hurt him. Also, when he’s trying to get the gun, he promises to bring it back as if he’s a friend borrowing a toy. The similarities help to establish a quick connection between the two.

Up to this point, we’ve hardly mentioned the animation in Cartoonish. There isn’t a ton of it but what’s there is excellent. Animator Chris Slavin and colorist Brandon Phillis do an excellent job. Together, they show an extremely appealing character style with vibrant colors. To go into detail about the events that cause the animation would be to ruin the film. Obviously, we’re not going to do that. However, the scenes where the animation is prevalent is a turning point for the characters. While the film seems innocent in appearance here, it’s about as dark as it could possibly get. Yet, you’re still unable to turn away due to the massive appeal of what you’re seeing onscreen. 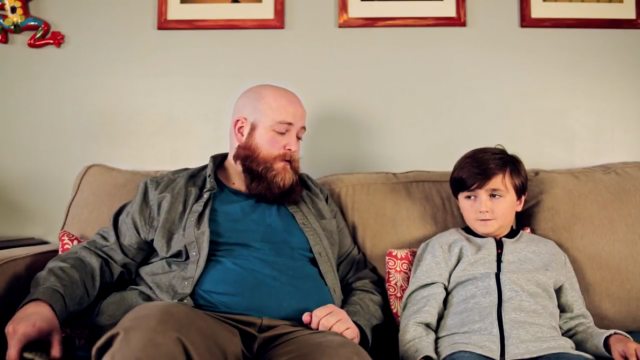 The biggest negative about Cartoonish is that it just doesn’t feel long enough. If it was a little longer, there could be a tad more character development and some more story elements added in. In this form, it’s like watching a brief snippet of someone’s day without knowing anything about them. Yes, it works in this regard but it still doesn’t stop you from wanting to know more about these characters and what’s going on in their lives. Also, with such appealing animation, it’d be nice to see more of it. It’s hard to talk about these scenes without ruining anything but it simply feels like it could be slightly expanded on.

Either way, Cartoonish is a very intriguing short film. Like a handful of the shorts we’ve discussed on this site, it’s unlike a lot of work you usually see. This is especially true in the film’s tone and message. For those interested in checking this one out, just know that its deceptively lighthearted intro scene does not do the rest of the film justice. It takes a dark turn very quickly and it’s definitely a disturbing watch. That being said, Cartoonish is worth your time and is one of the more original short films we’ve seen.