Shockingly, it has been over a full calendar year since we’ve reviewed a film from DC Comics on this site. It’s crazy to think about but the frightfully average Justice League came out last November already. It has been mostly quiet on DC’s front as they’ve seemingly been reassessing their goals with the DC Extended Universe. Scratch that. Now, the company is apparently calling its shared superhero universe “Worlds of DC.” Either way, things are changing. Ben Affleck is officially out as Batman and has yet to be replaced. Jared Leto’s Joker is (hopefully) a thing of the past as Joaquin Phoenix is set to star as the character in his own standalone film. Yet, there are still some remnants of DC’s previous missteps from films like Batman v Superman: Dawn of Justice and the aforementioned Justice League hanging about. The one of note here at the end of 2018 is the return of Jason Momoa’s King of the Seven Seas in James Wan’s Aquaman.

Created by Paul Norris and Mort Weisinger, the character of Arthur Curry/Aquaman debuted back in 1941 in More Fun Comics #73. He was a founding member of the Justice League and one of DC’s most recognizable mainstays. He has appeared in many animated forms over the years with his most notable turns coming in the 1970’s Super Friends cartoon, the early 2000’s Justice League, and several of the DC Universe Animated Original Movies. Prior to this year’s solo adventure, Aquaman appeared in both Batman v Superman and Justice League. Though, his appearance in the former was a blink-and-you-miss-it cameo.

2018’s Aquaman begins in 1985 as lighthouse keeper Thomas Curry (Temuera Morrison) rescues a woman from the sea. The woman, Atlanna (Nicole Kidman), turns out to be the princess of the underwater kingdom of Atlantis. The two fall in love and give birth to a son, Arthur. Atlanna is forced to return to Atlantis and leave her new family behind. However, her trusted advisor, Vulko (Willem Dafoe), is tasked with training Arthur.

Fast forward to a year after Steppenwolf’s invasion in Justice League, a grown up Arthur Curry/Aquaman (Jason Momoa) stops a group of pirates from hijacking a nuclear submarine. In the process, the pirates’ leader, Jesse Kane (Michael Beach), dies and his son, David (Yahya Abdul-Mateen II), vows to avenge his father’s death. In addition, Arthur is sought out by Mera (Amber Heard) to claim his birthright as the true king of Atlantis over his younger half-brother, King Orm (Patrick Wilson). Mera, betrothed to Orm via her father, King Nereus (Dolph Lundgren), disagrees with Orm’s plan to wage war on the surface world. Along with Vulko, Mera urges Arthur to seek the Trident of Atlan to cement his place as king. Though, King Orm aligns himself with David and gifts him Atlantean technology to become the villainous Black Manta. 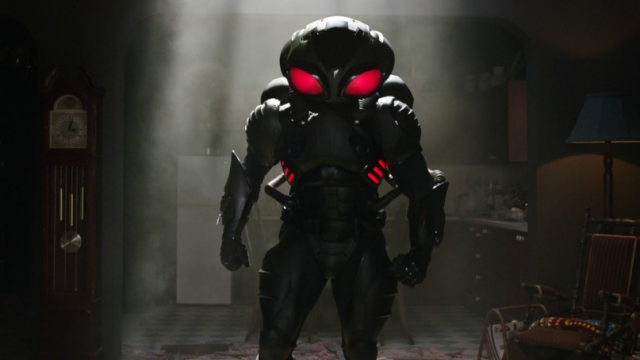 First things first. The story of Aquaman is ridiculous as you may be able to tell. At two and a half hours, there’s a lot crammed into David Leslie Johnson-McGoldrick and Will Beall’s script. As the film jumps around from plot point to plot point, it’s not necessarily hard to follow but it’s certainly a lot of that dreaded “stuff” we like to point out here at Cinema Smack. The film is so chocked full of “stuff” that the first 45 minutes to an hour tend to drag. It’s not surprising with all of the storylines that are set up but you feel as if something could’ve been omitted or tightened up. Also, there’s a pet peeve in modern filmmaking that we’ve yet to address on this site: the usage of locations. It seems as if every film these days has to tell you exactly where you are at all times. With Aquaman, it seems as if the name of a location pops onto the screen nearly every five minutes. Does the audience really need to know that an event is taking place “somewhere in the Atlantic Ocean?” That massive body of water certainly looks like an ocean so it’s probably safe to assume that the audience believes it to be an ocean.

The worst thing about Aquaman is definitely the script. Even with talent like Willem Dafoe, Patrick Wilson, and Nicole Kidman, there’s no saving the horribly written dialogue or nonsensical jargon that they spew out. There are so many instances where you’re taken out of the film simply because human beings don’t talk like this. There are scenes of blatant exposition, usually given by Dafoe, and then there are others that are just maddening. In one scene, Mera asks Arthur if he was listening to what she was saying. After admitting that he wasn’t, he proceeds to recite an exact quote from her about a minute later. One would think that this is just playful banter but Momoa’s Arthur is dead serious in both of his deliveries. It’s a flub in the script that seemingly went unnoticed. With that being said, the dialogue has a “so bad, it’s good” appeal as well. There are moments between Arthur and Mera that are so cringeworthy but you can’t help being amused by how laughably bad they are. 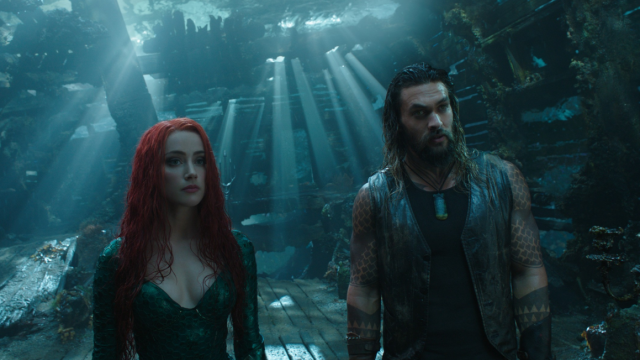 Frankly, that’s Aquaman in a nutshell. It’s so bad, it’s good. From the story to the acting to the script, it’s without doubt one of the dumbest movies of 2018. However, it’s so damn entertaining. After the first 45 minutes of the film, Aquaman turns into nonstop entertainment. It’s beautiful to look at with the CGI doing its best to channel something like Avatar.  Jason Momoa and Amber Heard aren’t great but there’s something appealing about two attractive people with limited chemistry galavanting through exotic locales. At one point, it even turns into 1999’s The Mummy for a while which is totally welcome. Unlike most of the other DC films, Aquaman actually feels like an adventure. It’s schlock but in a good way. Whereas every DCEU film not titled Wonder Woman was schlock in a bad way. James Wan and company had fun making the film and they encourage their audience to do the same while watching it.

There’s really not much else to say about Aquaman. Is it a necessarily “good” film? Not really. Again though, it’s unbelievably entertaining. In a nutshell, it’s a live action cartoon. It actually feels like a comic book movie. Hollywood has come so far in its portrayal of superheroes over the years. Of course, Marvel has become the gold standard of superheroes as they seemingly do no wrong. Christopher Nolan’s Dark Knight Trilogy became more than comic book tales with its gritty realism and no-nonsense approach. 2018’s Aquaman cuts out all of that and just wants to party. While it doesn’t boast any monumental storytelling, it has heart and isn’t afraid to have fun. In terms of DC, Aquaman is easily the most lighthearted film from the company in years and, in this case, that’s exactly what it needs to be.