There’s an old saying that you’ve all heard before: a picture is worth a thousand words. Sometimes in film, there’s no truer statement than that. Riveting stories and great acting go a long way in attracting moviegoers. Yet, there are other instances where a captivating visual can do just as much. Mariam Khatchvani’s 2017 feature film debut, Dede, is a perfect example of that. What it lacks in a captivating story is made up multiple times over by stellar visuals and an intriguing look at a curious part of the world.

The film opens in 1992 with a group of surviving men returning home from the Georgian Civil War. One of the soldiers, David (Nukri Khatchvani), invites Gegi (George Babluani) to his wedding after Gegi saved his life during the war. Upon arriving in David’s mountainous village of Svaneti, Gegi realizes that David’s arranged bride-to-be, Dina (Natia Vibliani), is a woman he previously had relations with. Drawn to one another again, Dina refuses to marry David. Indebted to Gegi for saving his life, David commits suicide. Both Gegi and Dina are eventually free to be together despite estrangement from Dina’s family members. Five years later, the couple have a son, Mose (Mose Khatchvani), and Dina still struggles with the fallout from her decisions as well as some new setbacks.

While the story may sound somewhat dense on paper, much of it is implied as opposed to shown. Most of the important events, such as death, are quickly glossed over. Normally, you’d expect these plot points to be more focused on than anything else in the film. Instead, Khatchvani opts to cover the fallout of the events and their effect on Dina instead. This approach does work throughout Dede but only sometimes. Whereas some films suffer from having too much story, this one doesn’t have enough. The issues that the characters have are interesting but it often doesn’t feel like Khatchvani wants to let viewers get too attached to the characters either. Much of the story feels like reading a summary that simply tells you what happens instead of allowing you to get emotionally involved with it. 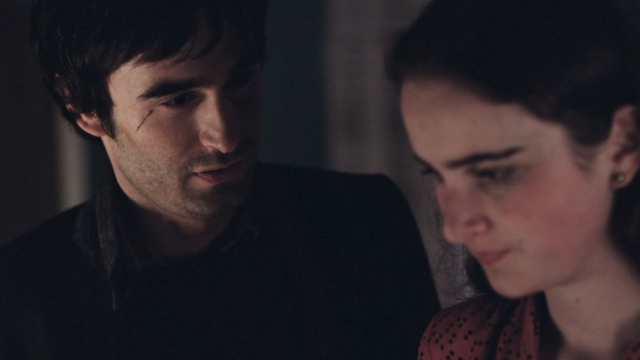 Another minor problem with the film is that the audio leaves something to be desired. Like two recently reviewed films on this site, Simple Mind and Cam-Girl, the sound effects are decent but the voice recording is downright torturous at times. For most of the film, the speech is muddied but tolerable. Though, there are moments where you almost want to mute the film due to the noisy and unpleasant audio. Scenes where characters talk and/or sing over one another are frequent annoyances. A more specific instance is a scene where a van loudly idles while three men lunge at two shrieking women. These issues don’t necessarily ruin the film but they’re far too often and usually overstay their welcome.

Dede certainly isn’t all bad, though, as there’s some very strong filmmaking at its core. Despite having an inexperienced cast, the acting is quite good. George Babluani is the only true actor in the film as the rest of the cast consists of unknowns. While Babluani’s Gegi is the focus early in the film, the attention soon shifts to Natia Vibliani’s Dina. Vibliani, in her first and only film role, excels as Dina. There’s a discomfort in her portrayal which could potentially stem from being a novice. Though, it works extremely well for the character as she’s constantly governed by old customs but torn by her own wants and desires. 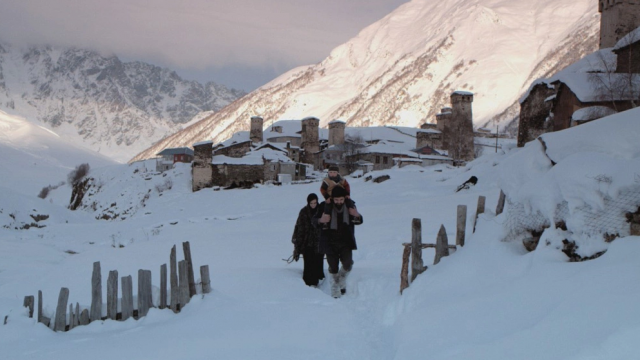 The best thing about Dede are definitely its visuals though. Even when you’re turned off by the lacking story, the cinematography from Konstantin Esadze and direction from Mariam Khatchvani make up for it in spades. The backdrop of the sprawling, snowy mountains is breathtakingly beautiful. To see these small villages and even tinier people tucked away among them brings a whole new meaning to the events of the story. The locations depicted on film are places that time has seemingly forgotten. For many, the customs and beliefs are something completely foreign and don’t feel like something that would’ve been practiced even in 1992. In addition, there are mundane tasks, such as characters doing laundry and kneading dough, that provide even more character to this specific part of the world. Some of the shots feel like something out of a documentary as opposed to narrative filmmaking.

While there seem to be some missteps in Dede overall, there are aspects of it that are stunning. Again, the locations are absolutely beautiful but also as desolate and bleak as the story itself. Bolstered by some understandably uncomfortable acting that complements a distressing story, Dede‘s best moments cut deep. Although the film can drag and even annoy at times, it does find ways to keep you invested. In her feature length debut, Mariam Khatchvani paints an intriguing picture of an unfamiliar part of the world. Even with its negatives, Dede is not a film to be forgotten.