This is it, folks. For comic book and superhero fans the world over, we’ve reached the culmination of an eleven year odyssey that has been the Marvel Cinematic Universe. There have been the highest of highs (Avengers: Infinity War, Guardians of the Galaxy) and the lowest of lows (Captain Marvel, Thor: The Dark World) but the 22nd entry into the MCU certainly marks the end of an unprecedented era. With Avengers: Endgame, the comic book giant seeks to deliver a bombastic finale to the decade long Infinity Stones storyline. For fans of Marvel and its characters, it succeeds in its quest even though it often feels a little too safe and familiar especially given the hefty risks taken in its predecessor.

Before delving into the review, it must be stated that many things about the film will be kept quite vague. Yet, it’s expected that you’re caught up with the pre-Endgame films as there may be spoilers mentioned from those. As a film, Avengers: Endgame does a lot of different things throughout its mammoth three hour runtime. The MCU itself is a monumental achievement in regards to franchise filmmaking. The journey began back in 2008 with Iron Man. Films like The Incredible Hulk, Captain America: The First Avenger, and Thor soon followed before the first proper team-up of Earth’s mightiest heroes in 2012’s The Avengers. Back then, it seemed unfathomable that a film like The Avengers could actually deliver the goods. Well, look at what it has become now. After 22 films, the MCU is an absolute juggernaut and everything it has done comes to a fever pitch with Endgame.

The film picks up following the events of Infinity War where the Mad Titan, Thanos (Josh Brolin), successfully locates all six Infinity Stones and wipes out half of all life in the universe. The remaining members of the Avengers, including Tony Stark/Iron Man (Robert Downey Jr.), Steve Rogers/Captain America (Chris Evans), Thor (Chris Hemsworth), Natasha Romanoff/Black Widow (Scarlett Johansson), and Bruce Banner/the Hulk (Mark Ruffalo) among others, are left fractured in every conceivable way. Regardless, the survivors assemble one last time in a final attempt to undo the cataclysmic damage brought upon by Thanos and restore order to the universe.

As previously mentioned, the plot will be kept vague. Most viewers will probably at least have some idea of where the events will lead but those won’t be spoiled here. Overall, Avengers: Endgame is a tough film to gauge when it comes to audience reaction. Being a Marvel film, there will be unapologetically die-hard fans that believe that Endgame is perfection. Frankly, though, it’s far from that. Christopher Markus and Stephen McFeely handle screenwriting duties on this film just as they had on Infinity War. It definitely feels like it but not in the way that you’d think. It’s as if the screenwriters, along with directors Anthony and Joe Russo, had two versions of Infinity War as a film. Instead of choosing one and going with it, we get two different movies in Infinity War and Endgame that are then stitched together to make one gigantic story. 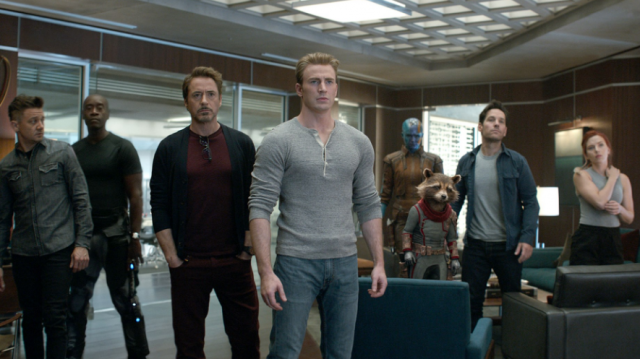 Ultimately, that’s what Endgame feels like. It’s a stitched together mess of a film with some serious commitment issues. The first act of the film is a logical continuation of the Infinity War story where we see the psychological torment that the surviving characters go through. Robert Downey Jr.’s Tony Stark delivers a killer monologue on not only the Avengers’ shortcomings but his own personal failures against Thanos. However, the tone of the film doesn’t stay dark and brooding as it gives way for a punchy one liner script and oodles of nostalgia. This is a huge issue as the film often plays for yuks despite the situation for the Avengers not being the least bit humorous. Sure, some humor is to be expected in a Marvel film but it often feels forced and much of it falls flat here. Similarly, Infinity War had the same big movie feel with dire consequences at its core but never felt like a gimmick in the way that Endgame does.

Though this film should focus on the task at hand and deliver on its implied promise of an epic conclusion, it’s more like a trip down memory lane of the MCU from its inception. So much so that it sometimes feels like a spoof on itself. Characters like Thor and, to a lesser extent, the Hulk are treated like something of a joke by the second act. It’s truly a shame as fans have grown with these characters over an entire decade. To see them mistreated to the point of becoming a parody in the darkest of times just feels wrong. In addition to spoofing itself, Endgame is basically the superhero version of another popular film and its not even subtle about it. Without ruining anything, the characters directly reference the film itself in Endgame. It’s a questionable route to take and, again, in the Avengers’ last stand, it really cheapens the overall experience.

Another regression that Endgame suffers from Infinity War is in its action. Long have we been down on the Russo brothers’ erratic visuals during their action scenes. They toned down the fast paced cutting and shaky camera for Infinity War but it returns in full force here. This is a huge pet peeve in all action films as so many filmmakers don’t allow their scenes to breathe. There are times where the editing cuts at such a breakneck speed that you can’t even tell who’s fighting. The biggest shame of it all is that you can tell that so much hard work went into the stunts and the visual effects but you never have time to fully appreciate the effort. 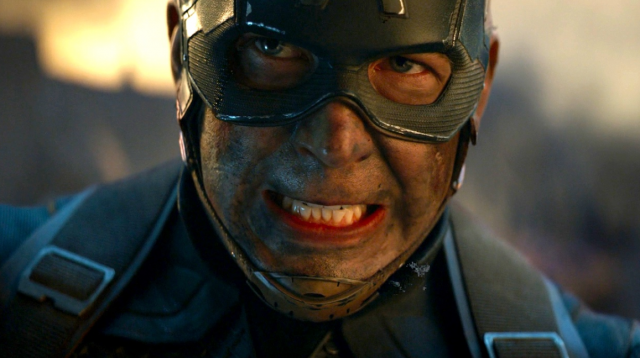 While there are a myriad of issues with Avengers: Endgame, it’s not all bad as the film does provide an epic conclusion of its Infinity Stones storyline. The final battle (not a spoiler because, of course, there’s going to be a final battle) is massive in scope and is the culmination of over two dozen superhero films. It’s similar to something like The Lord of the Rings: The Return of the King in its grandiose scale. It also delivers some truly emotional moments and payoff for the franchise’s biggest characters. Just as the MCU began with a core group of heroes, it celebrates them in this sort of pseudo swan song as well. Basically, aside from the indescribable action, Endgame‘s third act is worth the price of admission alone.

Without going into spoiler territory, that’s about all that can be said about the film though. It’s odd because Marvel could’ve just used the ending of this film as the ending for Infinity War and nixed the plans for another whole movie. In this case, the story probably would’ve been better for it. Obviously, we all know the financial reasons for pumping out Endgame as it’s set to shatter records at the box office. Yet, the film doesn’t feel entirely necessary. Much of the setup for the climax feels all too convenient and, frankly, a little too safe. Whereas Infinity War felt like a fresh and unique outlook on the future of Marvel, Endgame just feels like what you’ve come to expect from them. It’s boisterous and epic at times with a few touching moments and some comedy tacked on for good measure. Where are the risks? Now that the film has been released, is anything going to be different tonally or creatively? Certainly, Avengers: Endgame marks a new dawn for the Marvel Cinematic Universe but, just because we got new shoes, doesn’t mean that we’re not walking the same tired path.