When looking back through all of the films released this year, there really haven’t been many that stand out as the cream of the crop in 2017. Of course, that’s not to say that there haven’t been a number of good to great ones. It just seems like the year has been lacking standout titles. When it comes to Pixar, there’s typically a level of quality behind their work. With films like Toy Story, Up, and Inside Out on their resume, it’s not hard to understand why. Well, the animation giant has done it again with Coco, their newest collaborative effort with Disney. It also doubles as one of the best films of 2017.

Oddly enough, it seems like there hasn’t been much promotion behind Coco in the United States as other Pixar and/or Disney films. Though, the film was marketed heavily in Mexico. There, it released on October 27th, the weekend before Día de Muertos AKA the Day of the Dead. Regardless, the film has made healthy returns at the box office and been showered with praise from critics. In fact, it quickly became the highest grossing animated film in Mexico and, eventually, passed The Avengers to become the highest grossing film, period, in the country.

Coco follows 12 year old aspiring musician, Miguel, voiced by Anthony Gonzalez, as he defies his familial ban of music. He plans to enter a talent show to show off his skills and follow in the footsteps of his late idol, Ernesto de la Cruz (Benjamin Bratt). After his grandmother, Abuelita (Renee Victor), destroys his guitar, Miguel breaks into Ernesto’s tomb and steals his iconic guitar believing that he’s Ernesto’s great-great grandson. After strumming it, Miguel and his stray dog companion, Dante, can no longer interact with the living. Although Miguel can see them, he can only interact with the dead who have crossed over to see their families during Día de Muertos. 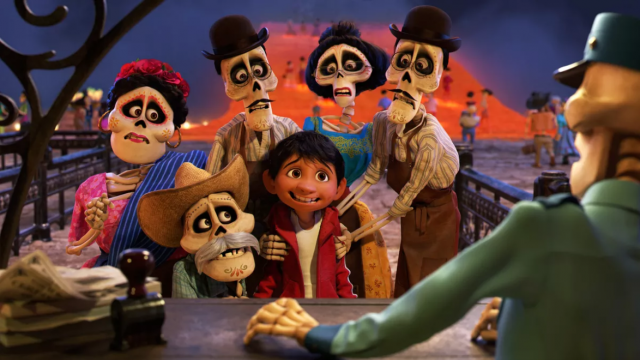 Miguel meets up with his ancestors whose pictures and offerings grace his family’s ofrenda. They take him to the Land of the Dead where he’s to receive blessing from his Mamá Imelda (Alanna Ubach) to return to the land of the living as long as he swears to never play music. Miguel declines his blessing, escapes his family, and seeks out his great-great grandfather for his blessing instead. Along the way, he joins up with Hector (Gael García Bernal) who’s unable to cross over due to being forgotten.

As some may have heard, there’s a claim that Coco is a ripoff of a film by Jorge R. Gutiérrez called The Book of Life. In terms of timeline, Coco director, Lee Unkrich, pitched the idea for his film back in 2010 around the release of Toy Story 3. Though, it wasn’t in development until 2012. In contrast, The Book of Life didn’t enter development until late 2012 but saw an earlier release than Coco in 2014. Regardless, while the two films share similarities, specifically with the Día de Muertos setting, The Book of Life is a love story while Coco is a coming-of-age story with strong ties to family.

The first thing you notice about Coco is how breathtakingly beautiful it is aesthetically. Whether it’s the colorful and vibrant Land of the Dead or the sun-scorched streets of Miguel’s village, the film looks fantastic. As per usual, Pixar has a knack for creating appealing characters no matter any flaws they may have. With this film, the Land of the Dead is full of skeletal characters that each have their own distinctive features without being too frightening for young children. Even a character like Hector, who often uses disguises, is still recognizable by his skull alone. Speaking of which, the decision to use calaveras/sugar skulls for the characters is a brilliant touch. 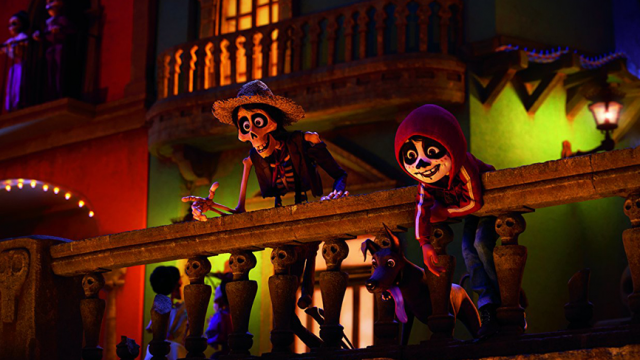 The best thing about Coco, though, is undoubtedly its emotional story. While the film certainly handles the subject of life and death, it’s not overly grim by any means. However, it boasts tremendous importance on the question of memory, legacy, and honor. Every character seemingly has their own opinion on how people should be remembered and it definitely resonates as a viewer. Some believe that family is the most important thing while others strive to be beloved by as many as possible. Even a character like Hector yearns to simply be remembered as someone who existed in life. The plot never gets too heavy handed with its existential crises (even in death). Instead, it tugs at the heart strings and draws sympathy for the characters. Also, Michael Giacchino’s score perfectly reflects the look, feel, and emotion of the story. It’d be no surprise to see his name pop up as an Oscar nominee in this capacity.

There really isn’t much to harp on Coco about on the negative end. At times, the twists in the story can be a little predictable but there’s far too much to like to get down on it whatsoever. Everything from the story, the voice acting, and wonderful animation all the way to the soundtrack and endearing characters are an absolute delight to watch onscreen. In a year featuring a logjam of decent films, Coco is easily a step above. Without a doubt, it’s one of the best films of 2017 by a large margin.