Remakes, prequels, and spin-offs are apparently the only things that Disney is interested in making these days. Despite currently being one of the largest media conglomerates in the world, The Walt Disney Company used to actually feel like a pioneer in the business. Now, it just has the money to buy whatever it wants to show off its success. A new Disney film used to seem like an event but now it just feels like something that has to happen every once in a while to pad quarterly earnings. This time around, we have Cruella. A prequel origin story of the villainous Cruella de Vil from One Hundred and One Dalmatians feels like an odd choice of subjects but, hey, they already made two Maleficent films so why not?

Created by author Dodie Smith for her 1956 novel, de Vil is more widely known as the antagonist from the 1961 Disney classic of the same name. Pompous, vile, and crazed, Cruella de Vil is hellbent on acquiring fifteen Dalmatian puppies from her old schoolmate, Anita, and her husband, Roger, to make into a fur coat. In the animated film, she was voiced by Betty Lou Gerson and this version of the character has been the standard bearer for further incarnations up to this point. The character hit the small screen as the main villain in 101 Dalmatians: The Series and also returned in 2003’s 101 Dalmatians II: Patch’s London Adventure where she was voiced by Susanne Blakeslee. Legendary actress Glenn Close gave the first live action portrayal of the character in the 1996 Disney remake and appeared again in its direct sequel, 2000’s 102 Dalmatians. Both films were middling for fans but Close did the best with what she had and actually serves as an executive producer on this new origin story.

Cruella begins with young rebellious Estella Miller (Tipper Seifert-Cleveland) not being able to keep herself out of trouble at school. Her mother, Catherine (Emily Beecham), who dubs her wild side “Cruella,” pulls Estella from the school and heads to London to start anew. Prior to arriving in London, they visit the wealthy Baroness von Hellman (Emma Thompson) seeking aid. Told to stay put, Estella ventures into a party being hosted by The Baroness and causes a disturbance. This leads to The Baroness’s ferocious Dalmatians knocking Catherine off of a cliff to her death. Ten years later, adult Estella (Emma Stone) ekes out a living as a petty thief in London with her friends, Jasper (Joel Fry) and Horace (Paul Walter Hauser), before eventually landing a dream job as a fashion designer working for none other than The Baroness. Taken under The Baroness’s wing, Estella has a bit of success but, of course, her alter ego, Cruella, slowly comes to the forefront as her tragic past catches up to Estella in the present.

Now, we’re going to get into a huge sticking point with Cruella but, before that, let’s get some of the praise out of the way first. It should be stated that Cruella is a very competently made film. Despite its somewhat excessive length at 135 minutes, it’s a fine film. Director Craig Gillespie puts together an engaging cast of characters with some very striking imagery and a story that will hold the audience’s attention from start to finish. Again, it’s fine. It’s certainly much better than what Disney tried to do with Maleficent and, if this is what Disney wants to do with its villain origin stories, people would probably watch more of them. Though, there’s supposedly a planned sequel to Cruella on the way which doesn’t seem like a great idea since there’s not really anywhere to go. If they want more Emma Stone as Cruella de Vil, they may as well just remake 101 Dalmatians again. 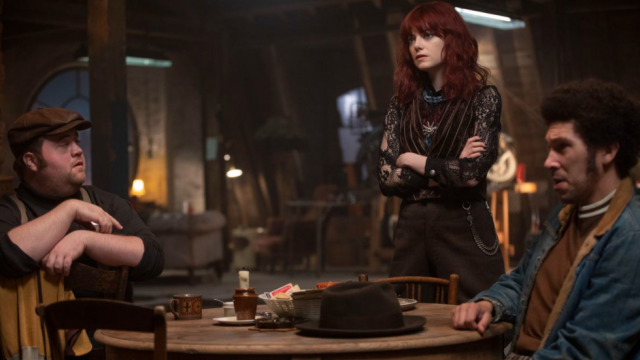 Speaking of Emma Stone, one of the best things about the film is its cast. Stone is one of the most talented young actresses in Hollywood and puts her all into every role. When it comes to her role as Estella/Cruella, she’s great. The only negative here is that she’s Emma Stone and almost too likable. One has to remember that she’s playing a character who wanted to slaughter nearly 100 puppies to make herself a fur coat even if the movie doesn’t really care to portray her in this way. In this film though, it seems as if Cruella is more of a punk rock princess than a dog killing psychopath. Emma Thompson as The Baroness is kind of a better Cruella than Stone is in this regard. This was obviously the point as Stone’s Estella inherits the traits of her idol/bitter rival while embracing her darker side. Regardless, Thompson is easily a highlight every time she’s onscreen with her crass attitude, quiet malice, and humorous nine minute power naps displaying her dedication to being the best. Joel Fry and Paul Walter Hauser are nice additions as Estella’s friends, and eventual dog-nappers, Jasper and Horace. Though, maybe the best supporting character is the eyepatch-wearing chihuahua, Wink, who steals every scene. Oh yeah, Mark Strong is also in this movie and he’s really weird. Not sure what they were shooting for with his character.

This brings us to the production itself. It’s big, bombastic, and it’s easy to see that Disney poured a lot of resources into making this movie. The costuming is fantastic, as it should be in a film centered on fashion, and it wouldn’t be a shock to see it nominated in many production categories next awards season. Between Stone and Thompson alone, there are countless flowing gowns and designer clothing to the point where they’re literally wearing something different in almost every scene. The one hiccup on the technical side of thing is the overuse of popular music. The soundtrack is excellent as there are a ton of amazing songs represented. Yet, songs like “Five to One” by The Doors and “The Wizard” by Black Sabbath don’t really fit in here. Speaking of the latter song, only the intro plays before giving way to “Sympathy for the Devil” which makes it bizarre that they even included it. The point is that there’s way too much music in the film and it feels like you can’t go five minutes before another begins.

Now, onto the real issue with Cruella. It’s no secret that Hollywood loves its origin stories. It’s as if the more you know about a character or event, the better. However, this isn’t always the case if you don’t have a great story to tell. While it’s not uncommon for superheroes or protagonists in general to receive the origin treatment, it seems that villains are starting to get them now too. Disney started this with its two Maleficent films which, frankly, aren’t very good and continue with Cruella. Especially now since Todd Phillips scored a mega-hit with 2019’s Joker, you can expect for this to become an ongoing trend moving forward. The main problem with a film like Cruella or any half-baked origin story like, say, Solo: A Star Wars Story, is that there’s nothing added to the character. After two plus hours, viewers come out of Cruella basically the same as they went in. The character is already iconic and people know who she is and what she’s about. We don’t need a whole entire movie to show us the creation of a character we already understand.

In contrast, the reason that a film like Joker works so well is because it doesn’t try to humanize the Clown Prince of Crime or make viewers sympathize. Instead, it’s the dehumanization and deconstruction of the man that is Arthur Fleck into a homicidal maniac. It fits the character and gives a viable explanation on how the Joker may have been created since, of course, there’s no confirmed origin in canon. With Cruella, Disney almost makes her into a hero character which, as we know, Cruella de Vil most certainly is not. Arthur Fleck isn’t a hero and is never intended to be one. As previously mentioned, Emma Stone’s Estella/Cruella is a cool, hip, punk rock princess and is really nothing like the villainous character people know. Again, this is a character that wanted to murder puppies to make a coat. There are little, not-so-subtle hints at this but this version of Cruella is never pushed to that point.

Ultimately, Cruella is a cash grab kind of film. There’s a great, young actress in the lead, a built in audience since everyone is familiar with the character, and, hey, it’s Disney so it’ll be good. The problem here is that Disney has lost its creative spark and continuously rehashes old territory for every penny they can squeeze out of something. Why do you think they keep remaking every classic animated film they’ve ever made? Why are they doing spin-offs using every name character they have? This isn’t even limited to the original Disney properties as it now extends to Star Wars and Marvel as well. There’s a reason that Disney has become the media juggernaut that it is but, even so, it’d be nice to see something new every once in a while too. As stated before, Cruella is a fine film but it doesn’t leave a lasting impression and is little more than a popcorn flick at best.