So, we may have gotten a bit critical about Disney in our recent review of Cruella. That doesn’t mean that we’re taking back anything we had to say about that film but it was probably unfair to say that the media conglomerate’s originality is completely gone. There’s still a small shred of hope at times as the animation studio, Pixar, tends to bring the best out of Disney. While the days of new animated classics like Aladdin or The Lion King are long gone it seems, the collaborative efforts between Disney and Pixar are always worth seeking out. This past weekend, Disney/Pixar’s Luca landed on the Disney+ streaming platform and is another rock solid, family friendly film with all the heart that these collaborations have become known for.

Set on the Italian Riviera, the film follows a young sea monster named Luca Paguro (Jacob Tremblay). Spending his days herding goatfish and forbidden from going to the water’s surface by his parents, Lorenzo (Jim Gaffigan) and Daniela (Maya Rudolph), Luca, of course, gets bored. That’s when he meets Alberto Scorfano (Jack Dylan Grazer), another sea monster who shows Luca that they transform into humans when dry. With a world of possibility in front of them, Luca and Alberto become close friends and set out to build their own Vespa scooter that will take them anywhere they want to go. They also befriend a human girl named Giulia Marcovaldo (Emma Berman) and feud with local bully, Ercole Visconti (Saverio Raimondo). Luca, Alberto, and Giulia then band together to participate in the Portorossi Cup Race to defeat Ercole once and for all and to acquire enough money to purchase a real Vespa.

As you can probably tell from the plot outline, the story of Luca gets a bit convoluted somewhere in the middle. It kind of feels like there are a lot of ideas here and, instead of focusing on one specifically, the film soldiers ahead with all of them. It seems like the sea monster/human story is good enough on its own but would’ve been too lacking in its Italian flair. The film is quite reminiscent of 2017’s Coco in trying to bring a sense of culture and tradition to it. The main difference is that Coco‘s entire story revolved around culture and family while only some of Luca is concerned with this. It may sound like we’re taking the film to task but, frankly, Luca does everything quite well. It just seems like the focus wavers too much which is something that doesn’t often happen in Disney/Pixar films. 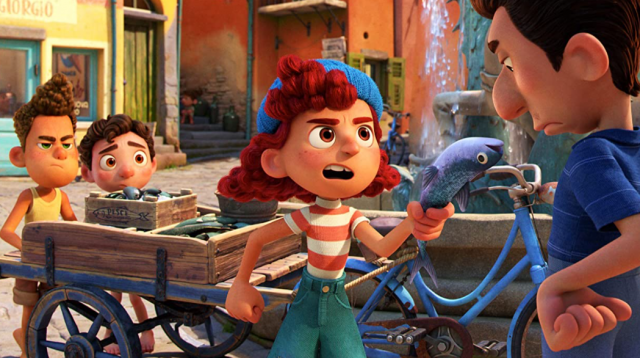 One thing that doesn’t waver is that classic Pixar look and feel of the film. Like so many that have come before it, Luca looks and sounds amazing. It’s kind of funny that the early years of Pixar were spent making films based on things like toys, insects, vehicles, and other non-human characters since the crew had trouble animating humans. Judging by films like Coco, Soul, and now Luca, you’d never know it was an issue. From Luca, Alberto, and Giulia to Ercole to even Giulia’s father, Massimo, each human character is distinct and memorable from their very first appearances. What’s even more impressive is the gorgeous work done on the Italian Riviera setting. There’s something so timeless about it that the setting often feels like a character itself. The 1950’s/60’s time period does away with the burden of modern technology giving the film a classic feel. Watching Luca will almost give viewers the impression of being on vacation without a care in the world. The wonderful Italian soundtrack, featuring artists like Edoardo Benatto and Gianni Morandi, also reinforce this feeling throughout the film’s runtime.

Another thing that Pixar films never seem to miss on are their heartwarming nature. Even before they were able to animate human characters properly, Pixar has always been able to bring humanity to their stories. It’s really no wonder why these films have such universal appeal and it’s no different with Luca. Luca, Alberto, and Giulia have the same sort of relationship that Harry, Ron, and Hermione from the Harry Potter franchise have. They’re three sort of outcasts who find each other and immediately form a strong bond. Together, they’re able to confront their enemies head on but, individually, they’re more inclined to cede to others. The relationship between Luca and Alberto especially is a highlight of the film and the story probably should’ve just stuck to their interactions more since it only goes halfway with its Italian flair. The final moments of the film are unbelievably touching and causes you to realize where the real heart of this story was all along. 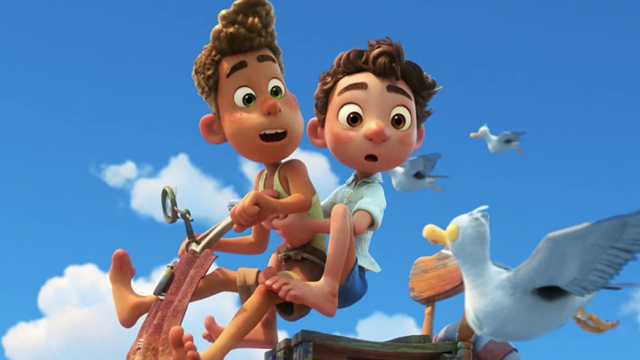 As you can probably tell, there’s definitely something missing from Luca. While it’s hard to pinpoint exactly what it is, we keep coming back to Coco in comparison. As previously mentioned, Coco‘s entire story revolved around familial heritage. Here, it feels like a sidenote. Other than a few character lines in Italian and a few “slang” terms, Luca feels more American than it probably should. After all, the cast is predominantly American with names like Jack Dylan Grazer, Jim Gaffigan, and Sandy Martin in featured roles. The lead, Jacob Tremblay, is Canadian, Maya Rudolph comes from an African-American/Jewish household, and Sacha Baron Cohen (who’s featured briefly) is English. It’s easy to see that Disney/Pixar wanted Luca to be the Italian Coco but it feels like a far cry from that in terms of both quality and overall execution.

When it comes to Luca as an overall product, much of the criticism could be considered nitpicky. There’s still a very strong story here and it’s a beautifully made film in general. Yet, it’s one of those Disney/Pixar films that simply doesn’t reach the heights of some of those that came before. Considering that Soul was the most recent output from the two studios, Luca had some lofty expectations. Then, when compared to something so culturally significant like 2017’s Coco, Luca just isn’t as impactful. However, it’s still a very solid film and, for Disney+ subscribers, is a can’t-miss as it’s included in the monthly fee. Even though Luca isn’t the best that Disney/Pixar has to offer, it’s far from a blemish on their mostly sterling partnership. The film still boasts that trademark quality, technical beauty, and the tremendous heart that the two studios are known for.

*Luca is currently streaming on Disney+ for subscribers. *