For filmmakers, one of the beauties of their craft is being able to tell any kind of story. While there are filmmakers like Martin Scorsese, who frequently returns to a genre, or others like Christopher Nolan and Quentin Tarantino where viewers kind of know what they’re getting into ahead of time, there are some filmmakers who reinvent themselves with each release. Last year, we reviewed an independent film from writer/director Mark Lewis called Enthusiastic Sinners. Though often sexually explicit, the film had a lot of heart and told a very human tale. Now, Lewis does some reinventing of his own with his newest release, Strider. A far cry from the graphic nature of Enthusiastic Sinners, Strider maintains the emotionally human side of Lewis’s previous work even if there’s a bit too much going on overall.

The film follows Jody Sue Brightwell (Yelena Friedman), a lonely teenage girl who spends much of her free time running. She’s spotted by disgruntled (and currently unemployed) track coach, Hannah Dalton (Maggie Alexander), who seemingly admires Jody’s ability. Hannah takes Jody under her wing and urges her to train for the Pinnacle Games, the biggest track and field competition on the east coast. Jody agrees but soon finds herself wrestling with her dedication to her coach and her longing to be a normal teenager. With a semi-supportive, but also somewhat distant father, and a new boyfriend pushing her in a different direction, Jody faces some tough decisions over the course of the summer.

For anyone that’s seen Lewis’s work on Enthusiastic Sinners, a film centered on running may be a bit of a surprise for viewers. However, the two films are more alike than you may think. Both are about people who have a chance meeting and form an intense relationship. In Enthusiastic Sinners, the main characters find love in a day full of lust while Jody and Hannah develop a kinship over their respective love and enjoyment of running. It’s true that Hannah starts out almost trying to exploit Jody for her own gain but, soon enough, there’s a bond between the two and they operate as a team. Lewis’s best filmmaking trait seems to be finding that bit of humanity that makes his characters feel real and relatable and he does so once again here. 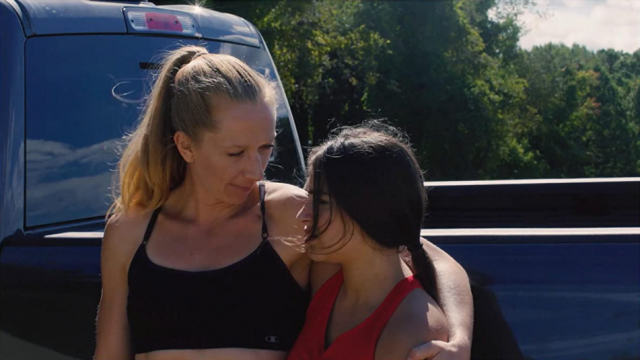 As was the case with Lewis’s previous film, Strider is mostly a two person show. The relationship between Jody and Hannah is the beating heart of the film and both Yelena Friedman and Maggie Alexander are up to the task of bringing these characters to life. In her feature film debut, Yelena Friedman does a pretty solid job as young Jody. As the only female in her family’s house and with her father, Bill’s (Scott Lewis) preoccupation with her younger brothers, Jody is mostly lost in the shuffle. She’s the woman of the house but with no real authority, meaning, or direction. This is where Maggie Alexander’s Hannah comes in. Hannah provides Jody with direction and also self-discipline. Alexander, who was fantastic in Enthusiastic Sinners, displays some of that same charisma and hopefulness here that she did in her previous collaboration with Lewis. This role may not be quite as memorable as that of Shelby in Sinners but the performance is still on par. The lone criticism we have about these characters is that there are times throughout the film where the lines sound scripted but both Friedman and Alexander’s deliveries are good enough to not be too critical.

Another highlight of the film is its look. While nothing flashy, there’s some excellent camerawork, including some effective drone shots, and a lot of strikingly beautiful shots throughout Strider. Set in a small northeastern town, Lewis’s direction and Ryan Balas’s cinematography embrace and highlight this with wonderful shots of Jody running down empty, tree-lined roads passed abandoned buildings and across old, rusty bridges. The setting is largely devoid of other people and strays from anything too modern. This helps get the audience lost in the story but it also gives a sense of isolation that Jody has surely felt for most of her life in this location. The setting gives the story and its characters a greater sense of identity as it exists in nature instead of a sprawling metropolis or some other overused or cliched location. 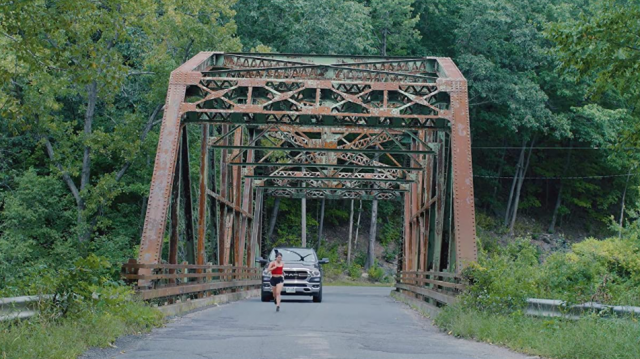 With all the praise we’ve given Strider thus far, there are still some negatives to address. The main issue being that there’s sometimes a little too much going on in the film. It may sound strange given that so much of the story is dedicated to Jody training for the Pinnacle Games but the training is the crux of the film. When Jody starts trailing off to hang out with new boyfriend, Tim (Josiah Schneider), the film gets a bit mushy with its teenage romance and, frankly, the relationship doesn’t serve a ton of purpose most of the time. It seems more like a distraction than anything which, potentially, could be its purpose in showing Jody’s dedication slipping. That being said, there’s a time when Jody voices her discontent but it’s kind of out of the blue. The issues the characters have in the film are often just stated and not really felt. Most of the time, Jody seems happy to be training. That is, until the script decides that she’s not. It’s not a backbreaking problem but it does make the conflict within the film feel a bit lacking. In addition, the ending of the film is a bit underwhelming. While we won’t spoil it here, the conclusion left us feeling a bit cheated for being invested in these characters for the majority of the runtime.

Mark Lewis’s Strider isn’t quite the experience that Enthusiastic Sinners was (for many reasons) but it’s still a very solid product from a sound filmmaker. Lewis clearly knows how to present characters as real people onscreen and this is certainly his strength. Of course, credit has to go to the cast, most notably Yelena Friedman and Maggie Alexander, for making Lewis’s vision of the characters come to life as well. This coupled along with the director’s eye for great looking shots and camera angles makes Strider a quality indie flick. Though it has a few problems along the way, Strider continues Lewis’s knack for compelling human drama regardless of his characters’ hobbies, pastimes, or professions. If you’re looking for a charming and well made independent film, check this one out.

*Strider is currently available for streaming on Amazon for Prime members and on Tubi.*