Well, we’re on the cusp of the upcoming summer blockbuster season. That must mean that it’s about time to praise another Marvel movie. This time around, we have our second adventure with Star-Lord, Gamora, Drax the Destroyer, Rocket Raccoon, and Groot in Guardians of the Galaxy Vol. 2. It’s great. The end.

Alright, alright. There’s more to it than that but, in short, that pretty much covers it. If you liked the first movie, there’s no reason not to like the new one. After the overwhelming success of the first film, it’s no surprise that a sequel would follow. In fact, upon its release in 2014, Guardians of the Galaxy was the highest grossing superhero film of 2014 after raking in over $774 million worldwide. Not bad for a relatively new team of somewhat obscure outcasts.

Set to the soundtrack of Awesome Mix Vol. 2, Guardians of the Galaxy Vol. 2 kicks off with a bang. Peter Quill/Star-Lord (Chris Pratt), Gamora (Zoe Saldana), Drax (Dave Bautista), Rocket (Bradley Cooper), and, now, Baby Groot (Vin Diesel) are tasked with protecting some valuable batteries from a giant monster. Ayesha (Elizabeth Debicki), leader of the Sovereign, agrees to exchange Gamora’s sister, Nebula (Karen Gillan), for their help. Rocket steals the batteries after they retrieve Nebula which angers the Sovereign who set out to destroy the Guardians.

That’s only half of the plot. The other half revolves around Peter Quill being sought out by his father, Ego (Kurt Russell), who initially helps them escape from the Sovereign. In turn, the Sovereign hire Yondu Udonta (Michael Rooker) and his crew of excommunicated Ravagers. The Guardians separate with Quill, Gamora, and Drax going with Ego and his “pet,” Mantis (Pom Klementieff), to his planet. Meanwhile, Rocket and Baby Groot are captured by Yondu’s men who turn on Yondu, with Nebula’s help, following his reluctance to do the Sovereign’s bidding. 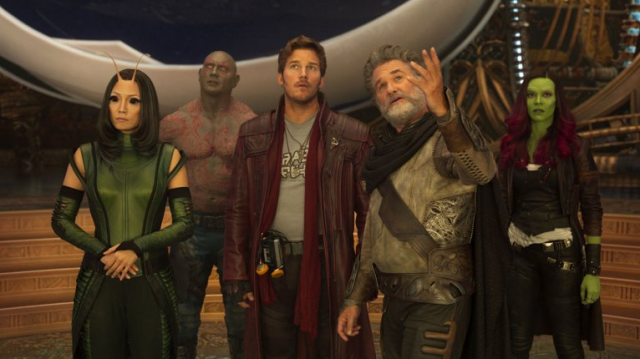 Guardians of the Galaxy Vol. 2 truly is like having two separate stories at once. This is a little jarring at first because there’s so much going on. With new characters, enemy nations, and mutinies leading the charge, it’s a lot to take in. However, writer/director James Gunn and his team do a great job bringing the two halves of the Guardians back together for the climax of the film. By the film’s end, the pieces of the plot are put back into the right places for a very satisfying conclusion.

As was the case with the first film, the visual effects are constant eye candy. Many CGI effects in modern cinema can become extremely distracting and ugly despite how much time and effort are put into them. That’s not the case here. Even though some of the characters are fully CGI (i.e. Rocket and Baby Groot), they feel like a real part of this world along with the tangible actors onscreen. Every scene is beautiful to look at thanks to a monstrous effects team, their attention to detail, and an appealing use of color.

Also, the humor is back for another go-round. Whether it’s Drax commenting on how hideous Mantis is, Quill and Rocket’s back and forth insults to one another, or Baby Groot misunderstanding everything the other characters say to him, there are very few jokes that fall flat. Though, one thing that gets mildly irritating is Drax’s constant laughter. Sometimes it enhances some of the jokes but, in other cases, it’s slightly irksome. It’s not bad enough to dislike the character or film but it’s a minor annoyance at times. 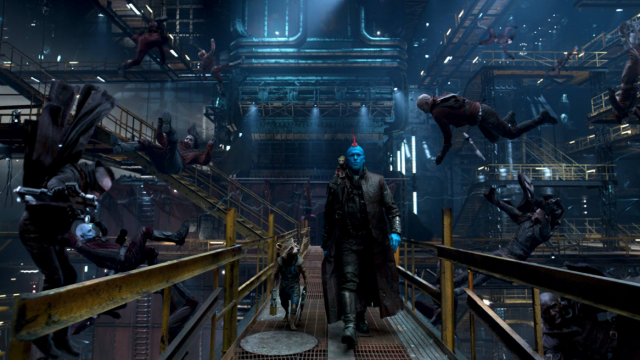 The best things about this film are the music and the characters. While Awesome Mix Vol. 2 isn’t quite as memorable as Vol. 1, there are still some killer tunes. Most notably, Fleetwood Mac’s “The Chain” is an absolute highlight. As for the characters, they are some of the most lovable that the Marvel Cinematic Universe has to offer. The five main Guardians remain consistent with their roles in the previous film but it’s the other characters that shine brighter this time. In particular, Yondu and Nebula have much bigger roles in Guardians of the Galaxy Vol. 2. There’s a touching relationship built with Yondu and Rocket as well as Nebula and her sister with whom she’s trying to kill. Yondu’s relationship as Quill’s father figure is also at the forefront as Ego bonds with Quill.

What really is there to say? Marvel continues to impress with their cinematic universe. Though, for as good as the films that focus on Avengers characters have been, the Guardians films feel like their own entity. They have a little bit of everything. The action, comedy, character development, and touching moments are all there. In Vol. 2, they’re even more at the forefront. While it’s not as tight of a film as its predecessor, Guardians of the Galaxy Vol. 2 is an emotionally bigger film and solidifies the Guardians as, arguably, the best characters that the MCU has to offer.