Have you ever watched Lock, Stock and Two Smoking Barrels or Snatch and thought, “this would be awesome if it was in the style of Game of Thrones?” No?  Not surprising. However, English director, Guy Ritchie, has done just that with his newest film. King Arthur: Legend of the Sword is a familiar tale that has been rehashed time and time again. This time, the story receives that distinct flair that only Ritchie can bring.

Films like Disney’s The Sword in the Stone, Excalibur, and 2004’s King Arthur, among countless others, have previously told the story of King Arthur and the Knights of the Round Table. There’s nothing the least bit new about Ritchie’s retelling. Therefore, to stack it up against competition is unfair to the film itself. It’s not a musical comedy like Disney’s version nor is it a realistic adaptation like the 2004 film. What King Arthur: Legend of the Sword brings to the table is an entertaining two hours of cinema. It won’t be anyone’s favorite film of all time but you could certainly find worse ways to spend your time.

The film starts with King Uther (Eric Bana) battling the armies of the sorcerer, Mordred (Rob Knighton), at Camelot. Uther beheads Mordred and soon Uther’s brother, Vortigern (Jude Law), overtakes his Uther’s spot on the throne after sacrificing his wife to sea witches. Both Uther and his wife are killed by a demon knight, however, Uther’s young son, Arthur, is able to escape. From there, the adult Arthur (Charlie Hunnam) carves out a name for himself in Londinium despite being raised in a brothel. Eventually, Arthur is able to pull Uther’s embedded sword from a stone that no other man could. This marks him as the heir to the throne as well as his uncle’s enemy. 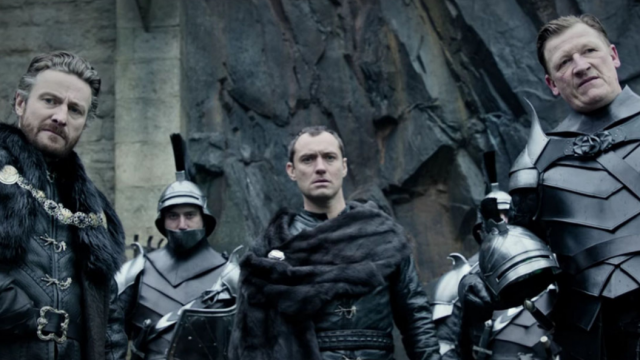 As previously stated, the story of King Arthur is nothing new. Even if you’re not completely enthralled with the subject, aspects of the story should definitely feel familiar. When taking on this project, Guy Ritchie must’ve known this. Luckily, he injects his own style into the film very much. Charlie Hunnam as King Arthur has swagger and is very amusing at times. His confidence and arrogance gets him into trouble yet he’s also able to back up his words. His friends, Wet Stick (Kingsley Ben-Adir) and Back Lack (Neil Maskell) complement him perfectly and they form a dominant trio in Londinium.

Meanwhile, the mage, Guinevere (Astrid Bergès-Frisbey), Bedivere (Djimon Hounsou), and Goosefat Bill (Aidan Gillen) take on the task of grooming Arthur into the king that they believe he should be. Both Hounsou and Gillen play similar roles to some of their past works in this film. Hounsou was one of Maximus’s confidantes in Ridley Scott’s Gladiator. Aidan Gillen has played the opportunistic, yet lovable, Littlefinger in HBO’s fantasy drama series, Game of Thrones. Both are excellent in King Arthur: Legend of the Sword as well. Bergès-Frisbey is hit or miss as Guinevere due to some of her lines feeling as if they’re being read from the script. Though, her physical performance is commendable.

In terms of technicality, the film is impressive. The landscapes and sets are beautiful with slick cinematography from John Mathieson who previously worked on this year’s Logan, X-Men: First Class, and, coincidentally, Gladiator. Ritchie’s crew did an excellent job in creating a world that feels real. Also, in classic Guy Ritchie fashion, King Arthur: Legend of the Sword features an amazing soundtrack. While it doesn’t necessarily feel like it’s from the same time period, it fits the director’s version of events. There are many pieces of the soundtrack that will get your foot tapping within seconds of being heard. 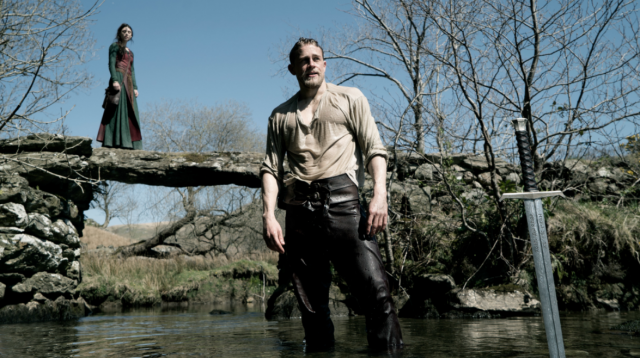 Of course, one can’t leave out Guy Ritchie’s knack for including comedy into his work. Make no mistake, there are a number of laughs in this film. While the story doesn’t feel like it should be humorous, comedy isn’t necessarily forced. It feels more circumstantial and the film knows when to be playful and when to be serious. The funniest moments occur during Arthur’s interactions with the other characters about their upcoming plans to take back Camelot. Though, when the events actually play out, they can be taken seriously.

The biggest problem with King Arthur: Legend of the Sword is that it just doesn’t feel like a story that needs to be told again. On top of that, it doesn’t even feel like a definitive version of the story that will transcend its predecessors. It simply feels like just another movie. One other minor complaint is that its handful of CGI elements are iffy at best. Regardless of its shortcomings, the film is still quite a bit of fun and better than expected. It’s backed by solid performances and some legitimately funny moments. Ultimately, King Arthur: Legend of the Sword isn’t a must watch but it’s an entertaining two hours of Guy Ritchie filmmaking.