Last June, we reviewed the feature length directorial debut, Hereditary, from writer/director Ari Aster. We heaped tons of praise on that film and spotlighted Aster as a filmmaker to keep an eye on. It was a welcome surprise, then, that his second feature, Midsommar, was announced for release just thirteen months after his first. While completely different in terms of its look, this new film seemed like a spiritual successor to Hereditary. After the wild trip that that film brought viewers on, we’re up for anything Aster has to offer. Like its predecessor, Midsommar displays Aster’s distinct filmmaking style along with an uncomfortably harsh emotional and psychological beatdown of its characters.

The term “midsummer” is the celebration of the summer solstice, the day with the longest period of daylight due to one of the Earth’s poles having a maximum tilt towards the sun. The dates between different cultures vary but the celebration normally occurs between June 19th and June 25th. It actually predates Christianity and is a predominantly northern European celebration. Though, the solstice is celebrated elsewhere as well. This also isn’t the first time that it has been featured in cinema. 2003 saw the release of the Danish film, Midsommer, which has a similar plot to Aster’s film on paper. That film also received a generic American remake, Solstice, directed by Daniel Myrick, one half of the duo that directed The Blair Witch Project.

Aster’s Midsommar opens with a young, anxiety-ridden woman named Dani (Florence Pugh) trying to contact her bipolar sister after receiving some strange messages. Dani reaches out to her passive boyfriend, Christian (Jack Reynor), who shrugs off her worries as he hangs out with his friends, Josh (William Jackson Harper), Pelle (Vilhelm Blomgren), and Mark (Will Poulter). Unfortunately for Dani, her worries are justified as tragedy strikes her family. The film jumps ahead to the following summer where Dani learns that Christian was invited to Sweden by Pelle for his ancestral commune’s midsummer celebration. Due to their failing relationship and Dani’s recent loss, Christian invites her along for the trip to the dismay of his friends. The group’s arrival to the commune is greeted by drug use, rituals, and traditions. Though, they grow more and more horrified by some of the events of the midsummer celebration as it continues.

Like Hereditary, the plot of the film may sound vague and somewhat your typical horror fare. Yet, Midsommar is anything but typical. At two and a half hours, the film’s slow burn pacing and lack of proper scares will certainly turn off some horror fans. The film is more uncomfortable and unsettling than scary but still very much horror. Again, like its predecessor, Midsommar is more akin to films of the late 1960’s and early 1970’s. There are some twists and turns but the film plays out more like a nightmare than anything. You can almost always see what’s coming but there’s nothing you can do to change it or make it stop. In his brief time directing features, Aster has already perfected the descent into madness for both his characters and audiences. 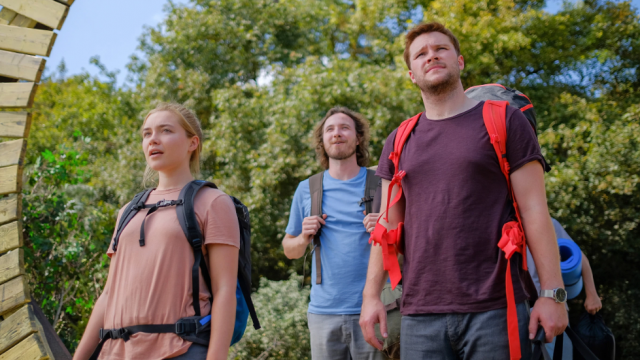 Speaking of Aster’s direction, it’s easily the best thing about the film. Again, the deliberate pacing may shy some viewers away but Midsommar is certainly a piece of art. Every shot is intricately detailed and strikingly beautiful to look at. The magnificent exteriors were shot on location in Hungary and there’s a perfect foreign, yet familiar, feel. For a horror film, it’s strange that the majority of the film takes place outside in the daylight. However, Aster’s uniquely distinct style and direction gives viewers a sense of dread and anxiety about this new experience for the characters. Long, sprawling takes and inclusive camerawork really heightens the overall experience of the film and help build tension. Last year’s Hereditary was a wonderful film to look at but Aster steps up his game with this one. A lot of credit has to also go to Pawel Pogorzelski for his lovely cinematography.

The cast is definitely praiseworthy for their work on Midsommar as well. Vilhelm Blomgren, William Jackson Harper, and Will Poulter’s characters aren’t just your usual cannon fodder that horror films tend to employ. Each character is unique in their own right and bring something different to the table. Specifically, Harper’s Josh has a sort of story of his own while Poulter’s Mark is the welcome comic relief. Jack Reynor has his ups and downs in the boyfriend role of Christian. There are a few times where his acting feels oddly stilted and awkward but, for the most part, he does a solid job. Though, Midsommar is a coming out party for Florence Pugh. She had a nice showing earlier this year as WWE’s Paige in Fighting With My Family but she’s on another level here. As a viewer, you feel her every emotion and she conveys so many different feelings with facial expressions alone. With only a few acting credits under her belt, she should be an ascendant talent in Hollywood if her performance in this film is any indication of her abilities. 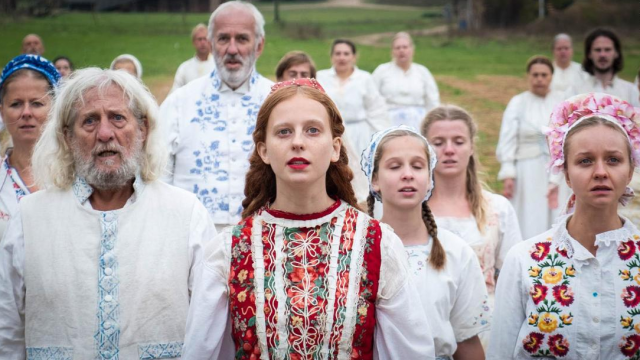 Yet, as excellent as Midsommar can be at times, it still falls short of the lofty heights of Hereditary. The main reason for this is the overall plot. The opening act of the film that addresses the tragic horror that Pugh’s Dani suffers through is riveting. Even in his short film work, Aster is great at delivering tense family drama. He could’ve focused solely on that again for his second feature and it would’ve been excellent. However, the film quickly does away with that storyline, save for a few references along the way, to focus on the midsummer festivities. It’s as if there were ideas for two movies that Aster cobbled together. There just doesn’t seem to be enough of a link between the two storylines overall and that takes you out of the experience a little.

Even with the messiness of the Frankensteined plot, Midsommar still warrants attention. There are a lot of really good things about the film but most of them just aren’t as good as Aster’s previous effort in Hereditary. While the two are different films, there’s no doubt that they’ll often be looked at as companion pieces and that will ultimately hurt Midsommar. Though, for fans of films of the 60’s and 70’s as well as horror buffs looking for a bizarre and nightmarish experience, Midsommar is one to check out. It’s hard to say how people will generally feel about this film. It’s not for a casual audience nor will it really grab the general horror crowd. As previously mentioned, Midsommar is a work of art. At times it can be meandering and pretentious but there’s also something really engaging about it. Regardless, Ari Aster is certainly putting his stamp on psychological horror and viewers should anticipate whatever comes next from him.