At 56 years old, who would’ve thought that Tom Cruise would still be jumping across rooftops and hijacking aircraft? This is especially the case since the 22 year old Mission: Impossible film franchise was almost dead in the water following the third film. After a triumphant resurrection in 2011 with Ghost Protocol and an excellent followup with Rogue Nation, the money train keeps rolling for Cruise and company in this year’s Mission: Impossible – Fallout.

Surprisingly, Fallout marks the quickest turnaround in between Mission: Impossible films. Previously, the shortest gap between sequels had been just over three and a half years from Ghost Protocol to Rogue Nation. This sixth film in the franchise also marks the first time a writer/director, in this case Christopher McQuarrie, has returned for a sequel. McQuarrie, of course, previously directed the well received 2015 installment, Rogue Nation. During the filming, star Tom Cruise broke his ankle during a stunt and filming was halted for eight weeks. Perhaps more famously though, was that co-star Henry Cavill was required to do reshoots for Zack Snyder’s Justice League during filming for Fallout. Cavill was under contract to keep his mustache for the film leading the visual effects artists on Justice League to edit the mustache out of the reshoots.

Mission: Impossible – Fallout takes place two years after the events of Rogue Nation. Following the capture of Solomon Lane (Sean Harris), the leader of The Syndicate, Lane’s followers reformed into The Apostles, a terrorist group. In an attempt to intercept the sale of three plutonium cores, Ethan Hunt (Cruise) of the Impossible Missions Force meets up with associates Luther Stickell (Ving Rhames) and Benji Dunn (Simon Pegg) to retrieve the cores. The mission fails when Ethan chooses to save Luther rather than secure the cores. From here, CIA director Erica Sloane (Angela Bassett) sends August Walker (Henry Cavill) to shadow Ethan and the IMF’s every move as they track down The Apostles and retrieve the plutonium. Former MI6 agent Ilsa Faust (Rebecca Ferguson) also has a role to play as she has her own agenda despite being an ally of the IMF.

Before we delve deeper into Mission: Impossible – Fallout, it should be known that the film continues the franchise’s upward swing. If you liked the previous two films, there’s no doubt that you’ll enjoy Fallout as well. One thing that the series has gotten right when compared to other action films is its characters. What’s even more impressive as how new characters keep getting added in alongside the older ones yet you still accept them. Of course, Ethan and Luther have been there since the beginning. Benji Dunn was introduced in Mission: Impossible III while Ilsa Faust and IMF Secretary Alan Hunley (Alec Baldwin) were both introduced in Rogue Nation. Yet, each character feels important and they’re all perfectly likable even when they’re at odds with each other. This film’s no different with Henry Cavill and Angela Bassett lending their talents to the story. 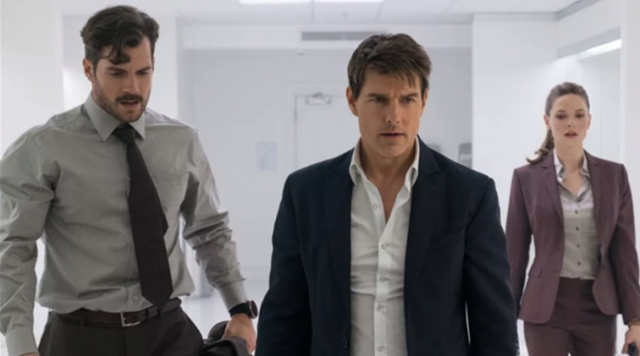 As per usual, the stunning action is back for Mission: Impossible – Fallout as well. As ridiculous as some of the scenes throughout the series get, you never feel like they’re too much. More specifically, the more recent films in the series handle the action extremely well. Whether it’s Ethan Hunt scaling the Burj Khalifa skyscraper in Ghost Protocol or him hanging off the side of an airplane that’s taking off in Rogue Nation, the stunts are executed to perfection. This film is no different with its excellent chase scenes. From foot chases to motorcycles to helicopters, these scenes are suspenseful and some of the most memorable of the series.

That being said, one of the biggest problems with the action in Fallout is that it goes on a tad too long. As you watch the film, you can tell that the filmmakers did some impressive work with these scenes and they definitely flaunt it. Running just shy of two and a half hours, this is the longest film in the franchise and it’s because of these scenes. After a while, you start to think to yourself, “they’re still chasing each other?” which is definitely not a good reaction to have. Again, the action isn’t bad by any means whatsoever. It just seems to linger too much with each bombastic scene. This is Mission: Impossible so it’s not surprising to see but it is a slight detriment to an otherwise great piece of action cinema. 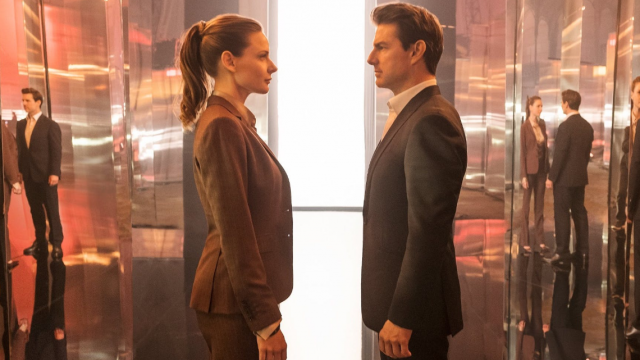 The other big issue with the film is in its villains. This is nothing new for the series as there hasn’t been a formidable villain since Philip Seymour Hoffman’s Owen Davian in Mission: Impossible III. Sean Harris returns as Solomon Lane but is mostly a non-factor as he’s being held captive for the majority of the film. Most of the time, Ethan and company are battling members of The Apostles. While this is fine, there’s no one to really put a name and face for most of the film. Ethan is mostly just beating up henchmen. In classic Mission: Impossible fashion, there is a twist that we won’t give away here. It does make the story more interesting but it’s also blatantly obvious from the start as well.

Despite some of its shortcomings, Mission: Impossible – Fallout gets the job done. It’s fun to watch, has memorable characters (old and new), and boasts some great action scenes. Like the Marvel films, Mission: Impossible just hasn’t been able to get their villains right throughout the franchise’s lifespan. In addition, its action scenes go on too long. Had the film been cut down to the two hour mark like its predecessors, this wouldn’t be an issue. Either way, Fallout still shows that Tom Cruise’s Ethan Hunt is still at the top of his game. In an industry loaded with lackluster action fluff, Mission: Impossible continues to reign as one of the best in the genre.