Despite feeling like an eternity ago, it has only been a little over a year since we’ve discussed video game to film adaptations. Last February saw the release of Sonic the Hedgehog which, surprisingly, seems to have a pretty loyal following especially considering that there’s a sequel on the way. While our review on this site may not have reflected the general appreciation that that film has garnered, we can say that the cast and crew at least tried to make Sonic the Hedgehog a quality adaptation of the popular video game series. Today, we can say the same thing about another new big screen version of an iconic video game. After 24 years, Mortal Kombat returns to theaters and, even though it’s not perfect, tries its hardest to serve as an authentic and brutal nod to the legendary tournament fighter franchise.

The original Mortal Kombat video game was developed by Midway games and hit arcades back in 1992. The game was a massive success due to its groundbreaking digitized characters, gory finishing maneuvers (dubbed “fatalities”), and unique cast of characters. The game was ported to home consoles and spawned many sequels and spin-offs that continue to this day with the most recent entry in the series being 2019’s Mortal Kombat 11. The franchise’s success doesn’t stop there as it has branched out into television shows, comic books, novels, a traveling stage show, and even boasts a platinum selling soundtrack album. Outside of the games though, most people best remember the 1995 film of the same name and its 1997 sequel, Mortal Kombat: Annihilation. Though flawed, the first film is still regarded as arguably the best video game adaptation ever made while Annihilation is kind of amazingly bad in the best way. Nevertheless, Mortal Kombat is a title with extensive lore and characters that was more deserving of another go-round on the big screen.

This 2021 adaptation opens in 17th century Japan where Bi-Han (Joe Taslim) leads a group of assassins to wipe out a rival ninja clan. There, they run into the human buzz saw that is Hanzo Hasashi (Hiroyuki Sanada) before Bi-Han ultimately defeats him after having murdered his family. Though, the legendary god of thunder, Lord Raiden (Tadanobu Asano) arrives shortly after and takes Hasashi’s surviving infant daughter to safety. Fast forward to the modern day where washed up MMA fighter Cole Young (Lewis Tan) is prophesied to be the one to unite marked champions to do battle in Mortal Kombat, a tournament between Earthrealm and Outworld in which Outworld has won nine of the past ten tournaments. If they emerge victorious once more, Outworld will conquer Earthrealm. To ensure victory, evil sorcerer Shang Tsung (Chin Han) sends assassins, ultimately led by Bi-Han who now goes by the name Sub-Zero, to kill Earth’s champions one by one. Cole, along with new allies, Jax (Mehcad Brooks), Sonya Blade (Jessica McNamee), and Kano (Josh Lawson), align themselves with Lord Raiden and his understudies, Liu Kang (Ludi Lin) and Kung Lao (Max Huang), to fight off the villainous Outworld champions.

Seriously though, does the plot of Mortal Kombat even really matter? While it’s true that the video games do have an overarching story, it’s the combat and gore that fans are most interested in. If there’s anything to say about the plot of the 2021 film, it’s that there’s way too much plot. The 1995 adaptation quickly united its core group of Earthrealm characters to fight in the titular tournament. Yes, characters like Liu Kang, Sonya Blade, and Johnny Cage had their own motivation for doing so but the backstory was kept basic and to a minimum. Liu wants to avenge his brother, Sonya is in search of her archnemesis, Kano, and Johnny is trying to advance his career. In this 2021 version, there’s just so much going on and none of it is really of any consequence. The Earthrealm fighters are sort of hamstrung by needing to have a specific marking to participate in the tournament and then they need to find a type of inner power known as “arcana.” It’s admirable that director Simon McQuoid and his writing team took the story so seriously but this is still Mortal Kombat. 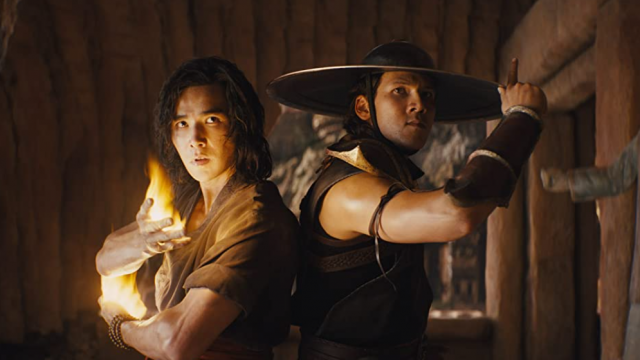 So, does this mean that the film is a lost cause and/or completely missed the mark? Thankfully, no. The 2021 adaptation of Mortal Kombat tries really, really hard to live up to the expectations of the franchise’s hardcore audience. This is evident by the film’s R rating which was a huge sticking point for past theatrical releases. It’s great to see Mortal Kombat operate without content restrictions as characters like Josh Lawson’s Kano cuss up a storm. More importantly though, the brutality and gore is front and center this time. One of the things that made the original game stand out was its usage of blood and, of course, its fatalities. Without doubt, the fatalities used throughout the film are the absolute highlight and actually make Mortal Kombat 2021 an overall enjoyable experience. While we won’t ruin any of the brutal and bloody fun here, just know that this is the type of satisfaction fans have been looking for in a Mortal Kombat film.

This version also does a solid job getting an admirable cast of characters together as well. Now, this is going to be a bit two-fold as there are also some big problems in this regard too. What the film does right is introduce recognizable fan favorites and then tries its best to showcase each of them. Obviously, characters like Sub-Zero and Scorpion get most of the fanfare due to being probably the two most popular in the franchise in general. Unsurprisingly, their interactions with one another tend to be the highlights of the film. However, characters like Jax and Kano also get interesting character arcs and time to shine over more traditional ones like Liu, Sonya, and the noticeably absent Johnny Cage. Jax has maybe the best fight scene in the film against Sub-Zero and Kano is just a treat to watch with Lawson in the role. That being said, there are characters who feel shoehorned in like Liu Kang, Reptile, and, sadly, Goro for some reason. Most of the time, these characters have less to do because of Lewis Tan’s Cole. Frankly, Cole is a lame character. With the extensive list of names that could’ve been used for a Mortal Kombat protagonist, there was no reason to make one up. The filmmakers could’ve easily used Liu Kang in this role and added elements of Liu into Kung Lao as the sole understudy to Raiden and you wouldn’t have missed anything. Tan tries hard but Cole is a poorly written everyman with nothing to latch onto. 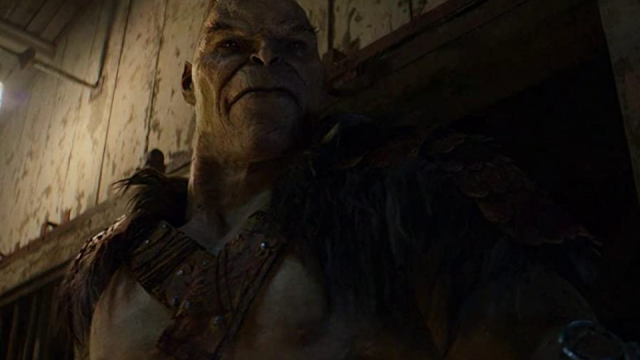 This leads us into the rest of the problems with this new version of Mortal Kombat. While the film is so close to being what fans of the franchise have wanted from a big screen adaptation, it seems like maybe there were too many ideas being kicked around without proper execution or budget. The story doesn’t even include the actual tournament. All the villainous characters are just trying to kill the heroes so that they don’t actually have to have the tournament. As Mortal Kombat: Annihilation proved in the past, too many characters can be a bad thing. The 2021 version doesn’t quite delve into that territory but, as we mentioned before, it feels like some just don’t get the respect they deserve here. In addition, it kind of looks like the film ran out of budget during its production. There are a lot of generic locations and they’re reused a lot. At times, the sets actually look like sets instead of sprawling environments. This is pretty uncommon with theatrical releases but, given the film’s $55 million budget, you can see why the scope of the film got narrowed down so much at times. The film is more in tune with a direct-to-DVD or video-on-demand release than it is a big budget theatrical release.

Even with its shortcomings though, it’s hard to get down on Mortal Kombat 2021 too much. It really tries hard to honor its namesake franchise and, honestly, doesn’t do that bad of a job. The runtime flies by as the fight scenes are made to feel special and, despite some blandness, seeing these characters in live action again (or for the first time) is a lot of fun. The film is certainly at its best when it’s being Mortal Kombat and falters a little bit when it tries to venture outside of that. While the 2021 adaptation of Mortal Kombat may not be groundbreaking or even better than its 1995 counterpart, its heart is in the right place at least. If the film performs well enough to warrant a sequel with a bigger budget, fans may finally receive the Mortal Kombat film that they’ve always deserved.

*Mortal Kombat is currently playing in theaters and streaming on HBO Max for subscribers.*