Domestic abuse is not a fun topic to discuss but is one that deserves attention regardless. There have been countless films that have had aspects of it present in their plots but very few that have actually had it at the forefront of the story. Writer/director Kaitlyn Boxall admirably throws caution to the wind in telling an admittedly personal story in the form of her newest short film, Behind Closed Doors. Taking place before and now during the ongoing COVID-19 pandemic, the film bravely urges those in need to get help sooner rather than later.

The film centers on Lisa Crawford (Holly Prentice), a young wife and mother, who’s a constant victim of domestic abuse. Her husband, Mick (Ryan Graham), is supposedly a good father but any frustrations he has are taken out on his wife. This causes Lisa to confide in her friend,  Alison (Ellie Mulhern), and seek help from a therapist. Though they clash a bit during their first therapy session, Lisa and Aaron Smith (Vasile Marin) grow comfortable with one another as their sessions continue. Given Lisa’s troubles at home and an increasing mutual attraction between the two, their relationship becomes intimate and further complicates matters.

Much like how the topic of domestic violence itself can be a hard one to discuss, it can also be hard to assess and critique. There’s no doubt that people will relate to the story of Behind Closed Doors and feel the need to get help themselves if need be. The film is an uncomfortable watch from start to finish and that feeling of always being on edge is prevalent throughout. This is also a very personal story for writer/director Kaitlyn Boxall who states that the film is inspired by her own mother’s struggles with domestic violence before she fled to a women’s refuge when Kaitlyn was only three weeks old. Again, it’s difficult to critique something so close to home but there will be some issues addressed here from a pure filmmaking standpoint. 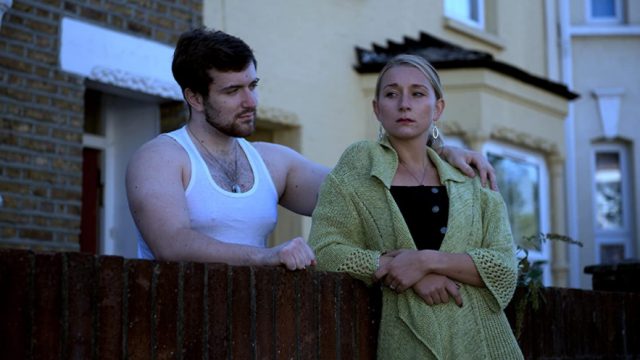 Before that, though, let’s discuss the positives. The subject matter of Behind Closed Doors is a bold topic to tackle with few big name films putting domestic violence at their forefront. Something like 2002’s Enough and last year’s The Invisible Man are two that spring to mind that have done so successfully but perhaps less realistically in some ways. One of Boxall’s goals with the film is to empower women to seek help as she feels the film can potentially save lives. While watching Behind Closed Doors, this goal is clear and obvious as the cast and crew do not shy away from showing discomfort as Lisa slowly begins to realize her predicament and the need to get away from her toxic and, most importantly, dangerous relationship.

For this, Boxall puts all of her faith into Holly Prentice to bring domestic abuse victim Lisa Crawford to life. Prentice does a great job as she puts on the façade of a caring wife while fearing for her own safety as well as that of her children. There’s also the budding romantic relationship she has with Aaron which could potentially be seen as fleeting and simply convenient due to his profession. As a viewer, you always feel for Lisa as her life remains an endless cycle of abuse and confusion. Vasile Marin’s Aaron is a bit tougher to discuss. It feels like Behind Closed Door‘s story is also part romance as Lisa and Aaron become attached to one another. This is a bit odd given Boxall’s commitment to shining a light on domestic violence and urging victims to get help. In his own way, Aaron is a contributor to said domestic issues as he takes advantage of a mentally and emotionally distraught patient who has confided in him. Marin does a fine job in terms of acting but the character of Aaron is strange and maybe somewhat misguided given the overall message being communicated with the film. 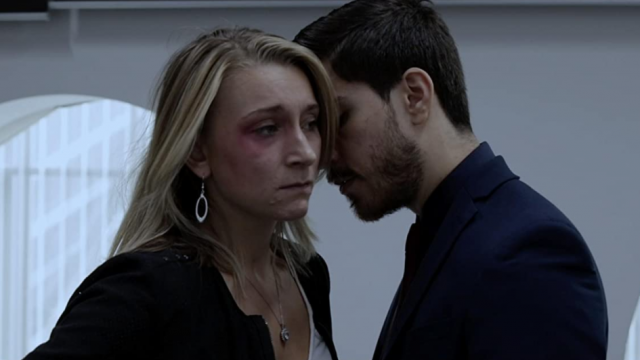 This brings us to some of the issues with Behind Closed Doors. While the romantic aspect fits with the overall plot (if not the message), it’s where the film feels a little cliched. We’ve discussed films like Queen of Hearts, Before the Dawn, and Enthusiastic Sinners that all employed a version of the “forbidden love” storyline. Though, those films were all centered on it while Behind Closed Doors is not. Because of this, the romance feels kind of shoehorned in and also wildly inappropriate given the abuse that Lisa is trying to escape at home. It’s a complicated situation and not completely unrealistic but it does muddy up the message of the film. In addition, it feels like the film is lacking style. There’s a gritty quality to the cinematography and story but it feels like there’s not a singular vision for how the film is supposed to look. It’s hard to put a finger on but it’s definitely missing a strong visual component to go with its powerful story.

Overall, it’s easy to see that there is a passion and personal attachment from Kaitlyn Boxall to Behind Closed Doors. With such a personal topic, sometimes one can remain too close to the truth and ultimately forget what they’re trying to convey onscreen. On the other hand, some may add too much extra to sort of Hollywood the whole experience up a bit. At face value, Behind Closed Doors is a tale that’s prompting women caught in a bad situation to get the help that they sorely need. This should always be the main focus. There’s a commendable message here and Boxall handles the subject matter very well. It’s the extra romantic angle that kind of causes the film to lose sight of its goals. Nevertheless, Behind Closed Doors is a film that can help and empower people in need. Boxall is actually in production on a sequel to the film and it’ll be interesting to see where the story goes from here. As long as it focuses on the strengths of this first film, there should be a potent message to latch onto.