In 2018, moviegoers are no strangers to remakes, reboots, re-imaginings, or any other term with the prefix re- attached to it. Sometimes though, people go overboard and remake something numerous times. Properties like The Three Musketeers, Dracula, A Christmas Carol, and Romeo and Juliet have been rehashed again and again over the years. Sure, they are timeless stories but, again, we don’t constantly need updated versions. The same can be said for Otto Bathurst’s first theatrically released feature film. The generically named Robin Hood hit theaters recently and is about what you’d expect. It’s Robin Hood. Again.

As previously mentioned, this is obviously not the first rodeo for the legendary outlaw. His first appearance can be traced back somewhere between the 13th and 14th centuries. In folklore, the character’s motivation was to steal from the rich and give to the poor. On film, Robin Hood has quite a history as well. His screen debut occurred back in 1908 in the silent film Robin Hood and His Merry Men. Countless iterations of the character have made their way into popular culture over the years. The most memorable versions come from films like 1938’s The Adventures of Robin Hood starring Errol Flynn, Disney’s animated 1973 adaptation, and the 1991 film, Robin Hood: Prince of Thieves, starring Kevin Costner. There’s also the 1993 Mel Brooks spoof, Robin Hood: Men in Tights, that has a place in the hearts of fans. In recent memory, the biggest production of the story came in the form of Ridley Scott’s Robin Hood released in 2010.

The 2018 film begins with Robin of Loxley (Taron Egerton) narrating and telling the audience that this is an untold version of the story. Robin meets a lovely, young thief named Marian (Eve Hewson) before being drafted to fight in the Crusades. After a number of years, Robin tires of the war and disobeys an order from his commander, Sir Guy of Gisbourne (Paul Anderson). Robin attempts to thwart a prisoner’s beheading after the prisoner’s father, John (Jamie Foxx), pleads for his son’s life. He’s sent back to England for his betrayal where the Sheriff of Nottingham (Ben Mendelsohn) has him declared dead while seizing his assets. Robin teams up with John and begins training to rebel against the Sheriff by attacking him stealthily as the Hood. The plan becomes to steal from the rich and give to the poor while striking from the shadows as a symbol instead of as himself. In addition, the Sheriff financially cripples the people which prompts Marian, her new lover, Will (Jamie Dornan), and Robin’s friend, Friar Tuck (Tim Minchin), to assist the Hood however they can.

Before getting into the negatives of the film, let’s discuss the positives first. Other than the unnecessary opening narration, the beginning of the film is quite good. Many Robin Hood films begin with the character as an outlaw from the start. This one clues you in to who Robin is before he becomes a thief. His morals don’t support the horrors of war and he’s victimized because of it. When he aligns himself with John, they go through some rigorous training scenes that are very good. The film actually has a little bit of fun here with the relationship between the two men and Robin honing his skills. Specifically, the archery in the film is well done and is almost reminiscent to something like the recent Tomb Raider video games. 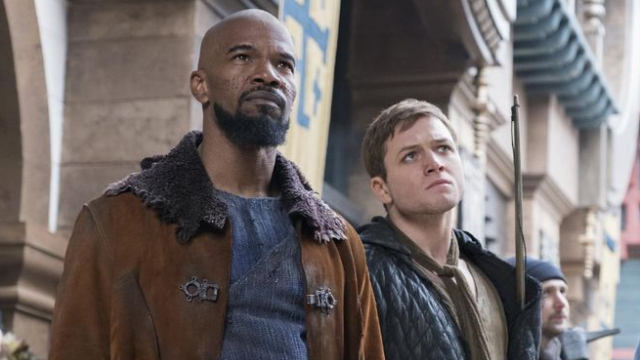 The acting all around is good if not great. Taron Egerton has shown charisma in the Kingsman series and it’s on display here as well. His Robin continues to be somewhat self absorbed throughout the film but it works for this story. He relishes in being an outlaw and exacting his own brand of justice but has yet to fully grasp being a voice for the people. Jamie Foxx’s Little John is the moral compass of the film and helps focus Egerton’s Robin on the greater good. Foxx, as usual, brings swagger to his role and is a lot of fun to watch. Ben Mendelsohn has become a go-to guy for sleazy characters. Whether he’s John Daggett in The Dark Knight Rises, Orson Krennic in Rogue One, or Danny Rayburn in Netflix’s Bloodline, Mendelsohn always makes you feel uncomfortable. His Sheriff of Nottingham is no different. Eve Hewson is also decent as Marian. Though, the film prefers to focus on Hewson’s anatomy moreso than her acting ability.

Unfortunately, the praise ends there. Firstly, the scope of the film is oddly small. The locations and set design look nice but they feel phony. There’s a hint of claustrophobia that makes the world feel small and it takes you out of the experience. The simplest way to put it is that the sets look and feel like sets. Nottingham isn’t a town you can get absorbed in. Instead, it simply feels like a facade. It seems like the editing and camerawork tries to disguise this a little with incessant cutting and closeups during pivotal action scenes. As has been discussed on this site before with films like Venom and the Russo brothers’ Marvel films, modern day action scenes never give you time to breathe. Filmmakers need to understand shaky cams and rapid fire cuts don’t make a good action scene. There’s nothing wrong with a little patience. 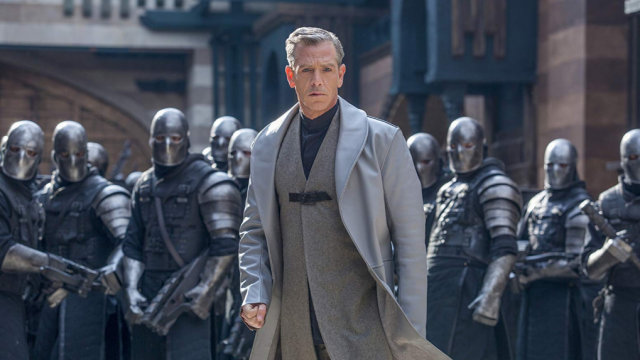 The biggest problem with the film is in its storytelling. No, it’s not necessarily bad but it’s almost an exact copy of Christopher Nolan’s Dark Knight trilogy. Seriously. In the span of two hours, it hits on every major plot point from all three Nolan films in order. Robin goes to war, turns on his commander, and then returns to rebel against those who wronged him. In Batman Begins, Christian Bale’s Bruce Wayne leaves Gotham City to join the League of Shadows before turning on them. Then, he seeks to fight injustice upon his return to Gotham. Robin’s first appearance as the Hood may as well be the same scene as Bruce’s fight at the docks as Batman. As the film continues, Robin tries to combat the Sheriff by going after his wallet just as Batman, Commissioner Gordon, and Harvey Dent do in The Dark Knight. Finally, Robin Hood sees an uprising of the lower class as they fight against their oppressors. The same thing happens in the final battle of The Dark Knight Rises with Batman, with the city at his back, and Bane duking it out for Gotham City supremacy. The similarities are uncanny and there’s no way that Nolan’s trilogy wasn’t an influence here.

Despite the film’s blatant attempt to tell the audience that this version of the story is unlike the others, be assured that it’s the same Robin Hood that you’ve come to know. It tries to disguise itself but fails miserably and, frankly, it doesn’t need to do this. There’s a reason that the story of Robin Hood has stood the test of time. It’s as if it’s ashamed that it’s just another retelling of a classic story. That begs the question of why Otto Bathurst and company even wanted to make the film. Audiences certainly didn’t need it if the filmmakers themselves weren’t all in on actually making it. Additionally, there’s absolutely no reason it should’ve ripped off the Dark Knight films as much as it did. Overall, Robin Hood isn’t bad but it’s as average as they come. It’s not unique or enthralling but it keeps your interest just enough. It feels like a film that didn’t have an artistic vision or purpose. It was just time for another Robin Hood. If you love the story and character, you probably won’t mind the film. However,stick with the wonderful 1938 version or the Disney cartoon if you want to scratch your Robin Hood itch.