By now, everyone knows that Hollywood likes to make money. Studios will shamelessly slap a name on seemingly anything to create a potential franchise and keep the money train rolling. In some cases, it’s understandable for a sequel to be made. With a film like The Matrix, despite your opinion of the sequels, there were several new ideas to explore by expanding into a franchise. Then, there are those films where we have to stop and ask ourselves, “Does this really need a sequel?” This is where Sicario: Day of the Soldado falls.

In 2015, Denis Villeneuve’s Sicario was released to much fanfare. It was nominated for Best Cinematography, Best Original Score, and Best Sound Editing at the Academy Awards. The film was also certified fresh by aggregate reviewer Rotten Tomatoes with a 93% rating. Though, there was some backlash from Mexican audiences due to its depiction of Juárez. For the sequel, writer Taylor Sheridan handles the screenplay once again. Unfortunately, though, Villeneuve, who has been praised multiple times on this site, doesn’t return to direct. Instead, Italian director Stefano Sollima mans the director’s chair here.

Sicario: Day of the Soldado begins with a suicide bombing in a Kansas City department store. Believing that Mexican drug cartels transported the terrorists over the border, the United States government gives CIA agent Matt Graver (Josh Brolin) permission to essentially start a war between the Mexican cartels. Graver contacts Alejandro Gillick (Benicio del Toro) to assist in a mission to kill a high profile Matamoros cartel lawyer in Mexico City. After Alejandro kills the lawyer, Graver and his team kidnap Isabel Reyes (Isabela Moner), the young daughter of the kingpin of the rival cartel, to spark the war.

It should be noted that Sicario: Day of the Soldado feels less like a direct sequel and more like a separate mission. There are obvious similarities with Graver and Alejandro using somewhat shady tactics to accomplish their goals. Yet, there’s not much of a connection to the first film other than those two main characters being in this sequel. In Sicario, Graver attempts to restore the balance in Mexico by eliminating a cartel so that only one will rule the drug trade. This time, the plan is to basically cause anarchy and start a war which seems a bit backwards due to the goal of the original. 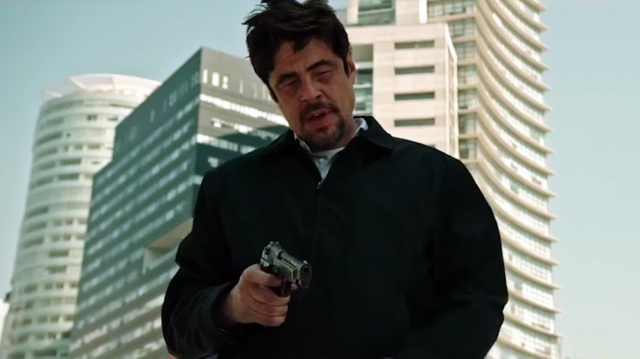 While it’s nice to see both Josh Brolin and Benicio del Toro return for Soldado, their performances, while good, feel somewhat uninspired. Emily Blunt’s Kate Macer is sorely missed in this film as she questioned the morality of every decision that Graver would make. Her character wasn’t overly interesting but she felt like a vessel for audiences to put themselves into and go along for the ride. The interactions between her and Graver were always tense but important to the story. In addition, del Toro’s mysterious Alejandro had a bigger purpose that turned into revelation by the end of Sicario. In Day of the Soldado, he plays more of your typical silent bad ass action hero. Again, he’s good in the role but the character lacks any serious depth in this sequel.

One somewhat minor gripe of the film is in its music. Original composer Jóhann Jóhannsson unfortunately passed away in February this year. Hildur Guðnadóttir, a cellist who worked with Jóhannsson on Sicario, handles the music for this sequel. Jóhannsson’s score had a tense and sinister feel while never feeling repetitive or overbearing. Guðnadóttir attempts to do the same but falls a little flat. One of the only things you’ll remember for days after seeing this film is the loud booming soundtrack that feels like it continues for the entire runtime. It’s not necessarily bad but it sure is repetitive compared to the original. 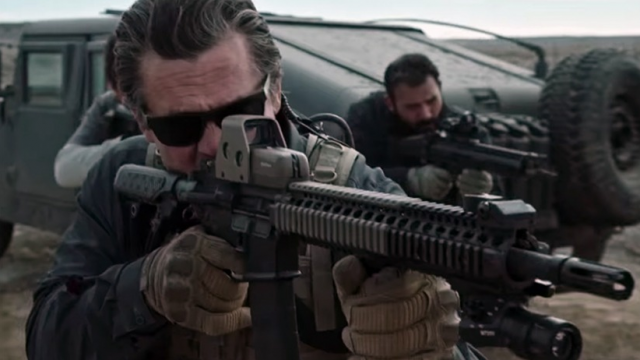 Of course, the film isn’t all bad. It’s actually pretty decent as far as unwarranted sequels are concerned. As previously mentioned, the acting from the returning cast is solid. Isabela Moner is very good as the kidnapped Isabel and you feel for her character as she’s simply a pawn in the game. The cinematography, led by Dariusz Wolski, is very nice and quite dark in contrast to Sicario. Roger Deakins, cinematographer on the first film, is an underrated master of cinematography so it’s nice to see the sequel take a different approach instead of copy his technique. Technically speaking, the sequel is impressive in its own right. Again though, it’s not as impressive as the first movie.

Ultimately, Sicario: Day of the Soldado is a solid, but relatively ho-hum, sequel. It feels as if it was a proposed script that had nothing to do with the first film. Then, the studio decided to make it into a Sicario film by adding in established characters. Surprisingly, that’s not the case as both films were written by Taylor Sheridan and even another sequel is currently in development. The original film didn’t feel like it needed a sequel and neither does this one. Sicario was a tense thriller with action elements but it seems like maybe the studio wants to structure the franchise after an action series like Mission: Impossible or the James Bond movies. Had Day of the Soldado been a standalone film, it may stand out more but, as a sequel, it’s decent but stuck firmly in the shadow of its predecessor.