We’ve stated a number of times that we may be in the midst of a horror renaissance in Hollywood. With films like A Quiet Place and Hereditary doing solid business at the box office and being met with critical acclaim, the genre as a whole feels as if it’s on an upswing. While those films scale back on gore and violence for the most part, sometimes you just have to sit back and have some old fashioned bloody fun too. For that, we have films like Richard Chandler’s professional wrestling infused horror romp, Parts Unknown.

In the pro wrestling industry, the term “parts unknown” is generally used as the home for wrestling’s more enigmatic characters. In the 1980’s, it was the point of origin for wrestlers like Papa Shango, the tag team Demolition, and, perhaps most famously, the Ultimate Warrior. As the wrestlers made their way to the ring, the ring announcer (usually Howard Finkel for old WWF fans) would announce them as being “from parts unknown.” For Chandler’s film, the title fits perfectly with horror as well as paying homage to the underlying wrestling theme.

The film follows the fictitiously infamous Von Strasser wrestling family. The Von Strassers had previously been a big name indie wrestling family but are somewhat blacklisted for their criminal antics and drug use. Fresh out of prison for murdering a poor jobber (Brian Zane of Wrestling With Wregret fame) in the ring, Hermann Von Strasser comes across a mysterious entity in the swamp. The entity, known as The Holiness and voiced by Jake “the Snake” Roberts, tasks Hermann with spilling more blood. Hermann teams up with Lacey Tormada (Lizzie Havoc), who falls on tough times, to satisfy the bloodlust. Hermann’s sister, Kitty (Sarah Michelle), holds a grudge onLacey and follows her own psychotic agenda throughout the film. Meanwhile, the Von Strassers are hunted by a vigilante cop who becomes the mystical Mother of Mercy (Alexandra Cipolla).

The first thing that should be addressed is that Parts Unknown is a throwback style grindhouse/exploitation film. Judging by its subject matter, this was definitely the way to go. It’s over-the-top violence, uncomfortable gore, and B-movie feel check all the boxes for an exploitation film. Ever since the release of Robert Rodriguez and Quentin Tarantino’s double feature, Grindhouse, these types of films have made a slight comeback. Ultimately, Parts Unknown kind of feels like a mix of Darren Aronofsky’s The Wrestler mixed with Rob Zombie’s House of 1000 Corpses. Though, both of those are superior films in general. 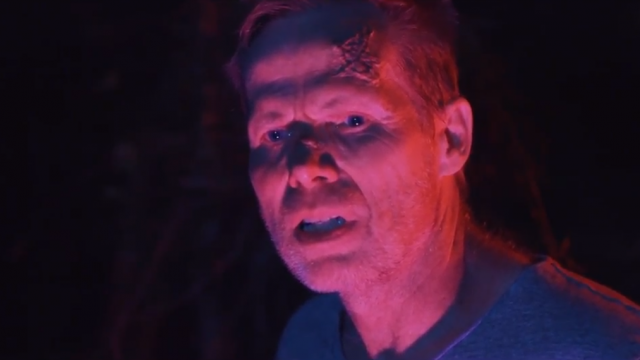 However, that’s not to say that there isn’t any fun to be had with Parts Unknown. Despite a plodding start to the film, it picks up following Mary Price’s run-in with the Von Strassers leading to her becoming Mother of Mercy. Her interactions with the Von Strassers throughout the film are often pretty humorous as she basically has a battle to the death with Harvey Von Strasser (Alexander Hauck). While the two try to kill each other in countless ways, they cast insults back and forth. As ludicrous as the scene is, it’s also hilarious. On top of that, Sarah Michelle’s Kitty is absolutely insane and is definitely the most memorable character of the film. Lizzie Havoc’s Lacey is the most sane character of the bunch but she has her own troubles to deal with.

Technically speaking, Parts Unknown is mostly pretty good. Obviously, with its low budget and grindhouse style, some of the sets are a little uninspired but they get the job done. There are some pretty good gore effects overall even if some of them look obvious. Again, with this style of film, it’s acceptable and doesn’t really take you out of the experience. The true highlight of the film though is in its neon lighting and retro soundtrack. The throwback score from André Fernandez and Michael Shiraef is awesome. It feels a bit like Cliff Martinez’s score from Nicolas Winding Refn’s 2011 film, Drive or even the score from the exploitation short, Kung Fury. 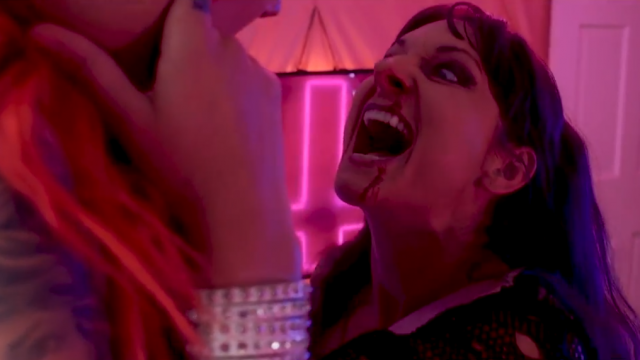 For the number of good things that Parts Unknown does, there are some relatively big issues with it. The first is with its length. At almost two hours, it’s not overly long but the first act tends to drag. You don’t get into the real meat of the plot until about thirty minutes in. This would be fine but, other than the introductory wrestling match, the other events in that first half hour don’t feel all that necessary. Also, the acting is a bit iffy at times. Though, we won’t harp on that too much as that’s often a trait of these grindhouse style flicks. The one other main issue with the film is in its shocking moments. Yes, they are obviously there to unsettle viewers but they go a bit too far. We won’t spoil them here but they’re definitely disturbing even if you have a strong stomach. If gratuitous violence isn’t your thing, proceed with caution.

Overall, Parts Unknown doesn’t hold up to something like Robert Rodriguez’s Planet Terror or House of 1000 Corpses. It also feels like the wrestling aspect could’ve been developed as more than just an occupation for the characters. Yet, there’s still an appeal to it. It’s an entertaining watch that has some issues but is much easier to sit through than most other low budget exploitation films. With Parts Unknown, Richard Chandler creates some interesting and chaotic characters that take viewers on a wild ride. From start to finish, you never know what they’re going to do next and that’s definitely the film’s charm.

*Parts Unknown is now available for purchase on Blu-Ray and DVD here.*