Less than two weeks ago, we discussed remakes/reboots/reimaginings/etc. in our review of the new Robin Hood film. It’s funny that, once again, we find ourselves in a similar boat now. A this point, it’s no secret that Sony has had a rough go in trying to develop a consistent Spider-Man franchise. To date, we’ve had six live action films starring the webslinger in the lead role spanning across three separate storylines. Though Marvel stepped in to take the creative reins of the Marvel Cinematic Universe’s current Spidey, played by Tom Holland, Sony still doesn’t appear ready to give up full control of their movie rights for the character. This time, Sony tries its hand at an animated version of the character in Spider-Man: Into the Spider-Verse.

Of course, we’ve already had a State of the Franchise based on the Spider-Man films so we’ll keep this rundown brief. Sam Raimi’s original live action trilogy, starring Tobey Maguire as Peter Parker, slayed at the box office and provided two very good superhero films in Spider-Man and Spider-Man 2. The latter, released at a time when superheroes didn’t dominate the box office as they do now, is arguably one of the best superhero films of all time. The third installment was financially successful but a horrible misstep that effectively ended Raimi’s series. The franchise was rebooted with Andrew Garfield in the lead role but, again, failed miserably with its 2014 sequel. In 2016, Tom Holland debuted as the third iteration of Peter Parker/Spider-Man to much acclaim in Captain America: Civil War. Holland returned for the standalone Spider-Man: Homecoming along with teaming up with other MCU favorites in Avengers: Infinity War earlier this year.

In Spider-Man: Into the Spider-Verse, things are a bit different as the film follows teenage Spider-Man admirer, Miles Morales (Shamiek Moore). His parents send him to an elite boarding school, though, Miles’ passion lies in graffiti instead. His uncle, Aaron Davis (Mahershala Ali), relates to Miles and shows him an abandoned subway station where he can practice his art. While there, Miles is bitten by a radioactive spider and he begins to discover new abilities.

In an effort to understand his abilities, Miles returns to the subway station and discovers a secret laboratory built by Wilson Fisk AKA Kingpin (Liev Schreiber). Peter Parker’s Spider-Man (Chris Pine) arrives to save the day while also sensing that him and Miles are alike. He passes along a thumb drive to Miles that will destroy Kingpin’s super collider that accesses alternate universes but Spider-Man dies in the process. This begins a chain reaction for alternate versions of Spider-Man to enter Miles’ universe to stop Kingpin. Among them is Peter B. Parker (Jake Johnson), an older, jaded version of Spider-Man, who takes Miles under his wing. 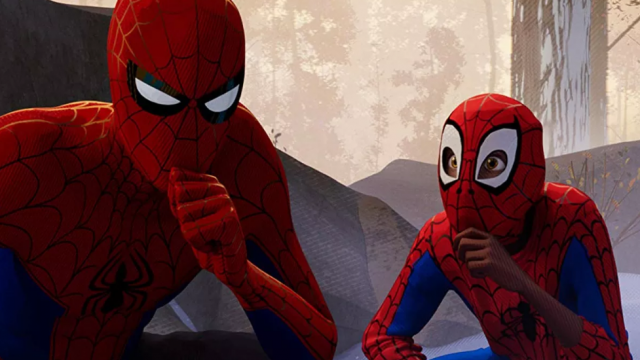 On paper, the story of Spider-Man: Into the Spider-Verse sounds as convoluted as can be. In execution, it works. Sure, it’s still a little bit of a mess as nearly any film that messes with the concept of time and interdimensional travel can be. Yet, the film balances its characters well and never makes you feel overwhelmed. The plot simply feels like a way for Sony to explain why there have been so many different versions of Spider-Man in such a short time period. When you think about it, it feels kind of strange for the filmmakers to have to explain and even spoof Sony’s inadequacies in telling stories about one of the most iconic superheroes of all time. Either way, the alternate universe plot works for the film but it’s fair to wonder why they even had to go that far with it.

Regardless, there’s a lot of fun to be had with Spider-Man: Into the Spider-Verse. The animation style is absolutely superb for a film like this. Whereas some of the DC animated films use a type of Saturday morning cartoon animation, Into the Spider-Verse feels like a living, breathing comic book. There’s a sense of texture to the film that’s replicated to feel like ink on paper. Along with that, you get all the typical comic traits such as paneling and sound effect text. The typical CGI animation of today is so overused and it’s refreshing to see something different for once. Cinema has been oversaturated by superheroes for at least a decade now and, finally, we have a film that isn’t ashamed to be “just a comic book movie” in substance or style.

This also marks the first time that Afro-Latino teenager, Miles Morales, has received his just do on film. The character was created in 2011 by writer Brian Michael Bendis and artist Sara Pichelli. Miles became the second Spider-Man following the death of Peter Parker in the comics. Fans of Spider-Man have clamored for the debut of Miles over the years. Many even wanted him to be the featured Spider-Man in the MCU. Of course, Tom Holland’s Peter Parker has since been met with universal acclaim. In addition to Miles, we also see the introduction of other Spidey influenced characters like Spider-Ham (John Mulaney), Peni Parker (Kimiko Glenn), and Spider-Man Noir (Nicolas Cage). Gwen Stacy (Hailee Steinfeld) is also introduced as a potential love interest and ally for Miles. All of the characters get their time to shine and add levity to the story. 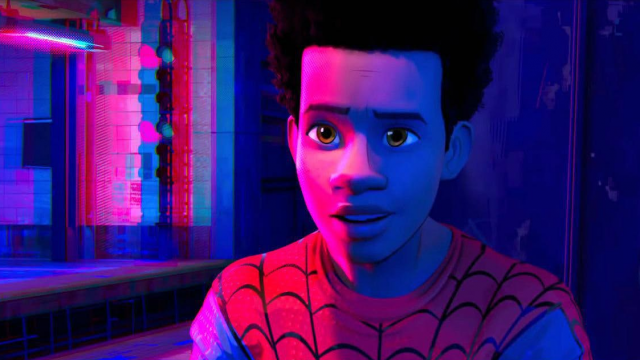 As far as negatives, there aren’t too many in Spider-Man: Into the Spider-Verse. Of course, we’ve already mentioned the somewhat messy plot. It does make you wonder why they really had to figure out a way to address the shortcomings in the past as well as attempt to explain that this film is an alternate universe to the MCU films. For fans going into this film, did anyone really expect it to be part of the MCU? Also, the film is a bit lengthy for an animated feature. Clocking in just shy of two hours, the film could’ve cut out a few things to trim down the length. It’s not necessarily boring at any given time but it definitely feels like it’s two hours.

Ultimately, Spider-Man: Into the Spider-Verse is a fine Spider-Man film. It features likable characters, amazing animation, and an interesting story overall. With much of the doom and gloom that has surrounded Sony’s attempts at the character in the past, it’s nice to see that they’re finally having fun with it instead. It’s also refreshing to see them poke fun at past mistakes (i.e. the unnecessary dance sequences in Spider-Man 3). If nothing else, the film instills a bit of hope for a good franchise from Sony. Though, with the rumor of multiple sequels and spin-offs on the way, there’s plenty of opportunity for Sony to falter again. For now, let’s just take Spider-Man: Into the Spider-Verse for what it is. It’s an appropriate introduction to a long awaited character where the sky’s the limit. Please don’t screw it up, Sony.