There was a time when it was a yearly tradition for a new film in the extensive, and often exhaustive, Saw franchise was going to hit theaters. Now, it appears that audiences will have to deal with uninspired attempts to reboot it every few years instead. Back in 2017, we reviewed the first pathetic effort to resurrect the franchise, Jigsaw. It added absolutely nothing new or fresh to the series while boasting an inexplicable twist ending that wasn’t clever or unique. Things haven’t changed a whole lot here in 2021 with the new sequel/spin-off/offshoot/whatever you want to call it, Spiral: From the Book of Saw.

Spiral is the ninth entry into the Saw franchise… or is it? Let’s talk about that title for one second. What does it even mean? What’s the Book of Saw? It seems that the producers have written themselves into a corner as they want to rely on the same old Saw gimmicks with overly complicated and brutal traps to test the characters’ will to live while not wanting to further convolute an already convoluted main plot thread. If you’re questioning whether or not Spiral is a Saw film, the answer is an obvious “yes.” It’s a Saw film that doesn’t continue the main story from the original seven film series. The film is an offshoot that will give fans what they expect from a Saw film but none of the intrigue that the first few entries had.

Spiral:  follows disgruntled police detective Ezekiel “Zeke” Banks (Chris Rock). Constantly at war with his colleagues due to his brash nature and recklessness, in addition to a past incident in which he ratted on a fellow officer, Zeke receives little support from within the police department. His superior, Captain Angie Garza (Marisol Nichols), assigns Zeke a new partner, William Schenk (Max Minghella), and together they investigate the death of off-duty officer and Zeke’s friend, Marv Boswick (Dan Petronijevic). Upon arrival, they notice the familiarly brutal methods of torture employed by the long deceased Jigsaw killer, John Kramer. However, this new killer’s main target is the police department itself.

Before we delve further into Spiral, it should be stated that it’s not a bad film. Uninspired? Yes. Unnecessary? Absolutely. Though, it’s competently made and it does try to do something a little different even if it doesn’t really succeed at breathing new life into lifeless franchise. At least it does a much better job than 2017’s Jigsaw which is easily the worst Saw film there is. Director Darren Lynn Bousman returns to the series for Spiral after directing Saw II, III, and IV. His return is welcome as his entries were some of the best but, like mostly everything with Spiral, his direction just feels like a rehash of the past. In addition, plenty of Saw crew veterans return such as composer Charlie Clouser and producers Oren Koules, Mark Burg, James Wan, Leigh Whannell, and Kevin Greutert. 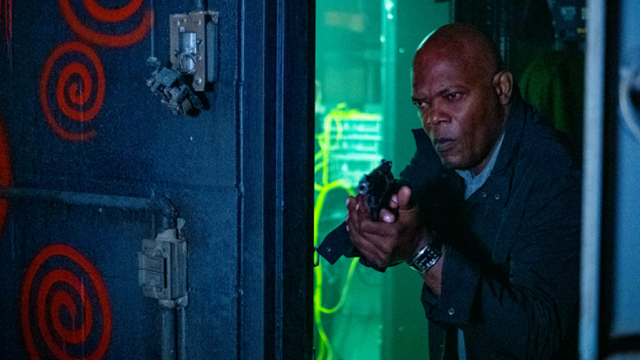 One thing we can’t really complain about is the acting. Known mostly as a comedic actor, Chris Rock spearheads this project as executive producer as well as the star and deserves a lot of credit for his efforts. It’s not always easy for actors to break stereotype but Rock capably handles being a mostly serious leading man. He does slip in some comedy at times but it doesn’t feel out of place or forced. Many of the other cast members are just kind of there but all do their job relatively well. The other most noteworthy name in the cast is Samuel L. Jackson as Zeke’s father, Marcus. Jackson is as expected with all of the charm and swagger he brings to every role. Like Rock though, he fits into this world and doesn’t feel out of place despite Spiral having a much different tone than most films that either of these two are in. Jackson isn’t in the film for all that long but he makes an impact regardless.

However, here’s where things take a downturn for Spiral. Let’s start with the overly complicated and elaborate traps. What so many of the Saw sequels seemed to forget was the simplicity of the original film. The majority of that film was about two men chained up in a bathroom with nothing but hacksaws. The implication was that they’d have to cut off their feet to escape and survive. It was a simple and effective game that could easily be “won” if the participants had the will to live. Saw II upped the stakes a little but encouraged teamwork between Jigsaw’s targets to survive the night. After this, the traps just got ridiculous and Spiral may have some of the most complex ones of all. They’re so over-the-top that the killer would basically need to be an engineer to make these work. Notably, the glass crusher/wind machine trap may be one of the most ridiculous things ever. It’s one of those moments where you’ll find yourself asking how something like this could even be made instead of reveling in the spectacle. Speaking of which, there’s certainly plenty of gore but it often feels like it’s without merit. Again, simplicity is key and Spiral has absolutely none of that. 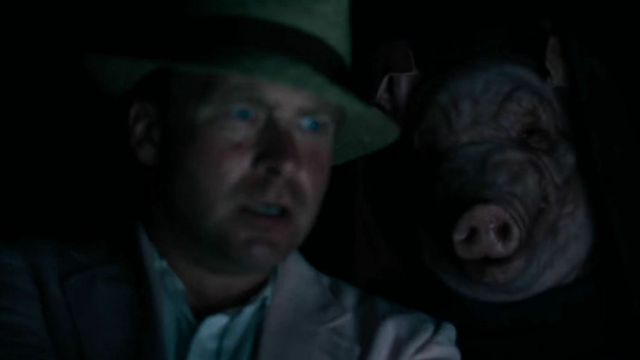 Perhaps the biggest takeaway from Spiral is the question of why it even exists. It almost feels like one of those films where it was concocted as a flawed police procedural that then had the Jigsaw elements added in last minute to turn it into a Saw film. It doesn’t feel like a unique vision or passion project from Chris Rock and crew. It also doesn’t add anything new to the Saw legacy. It’s just “another one.” After all this time, are people still clamoring for new entries into the franchise? It doesn’t seem so but here we are. As previously mentioned, Spiral isn’t a bad film but it’s really tough to praise it for anything either.

When all’s said and done, a middle-of-the-road score feels appropriate for Spiral. The best compliment we can give it is that it tries. It’s a much better effort than Jigsaw and is well made overall. Yet, it’s simply lacking too much in substance. Spiral‘s police procedural isn’t interesting enough to stand on its own legs but its Saw elements aren’t original or even all that creative enough to make it an interesting and effective horror experience either. For fans of the Saw franchise (even its many poor sequels), you may find some of what you’re looking for here. For everyone else, Spiral is just an average at best horror film designed to burn ninety minutes of your time.