As we’ve said in the past, the nice thing about independent filmmaking is that filmmakers are really only limited by their own vision. Sure, there are budgetary constraints and such that can throw a monkey wrench into an idea but, when it comes to storytelling, indie filmmakers can do pretty much whatever they want. Writer/director Daniel C. Nyiri takes this to heart with his feature debut as he refuses to cede creativity for any logistical issue that may hinder production. Nyiri’s film, Confession, is an intriguing and fearless, yet flawed, foray into faith and religion that’s crafted from top to bottom by the filmmaker for better or worse.

The story begins with Detective Jared Lamb (Gary C. Stillman) investigating a brutal multiple murder. At the same time, Dean McCallum (Gavin Lyall), a seemingly decent man, walks into a nearby diner while covered in blood. McCallum is arrested and subsequently questioned by Lamb and fellow detective, Reina Herrera (Queena DeLany). During their interrogations, Lamb and Herrera struggle to understand who McCallum truly is. Is he simply a psychotic serial killer or possessed by an unknown force? Could he be something completely different and unexpected?

Confession is kind of a tough film to discuss when trying to avoid spoilers because viewers learn quite early who/what McCallum claims to be. For the sake of this review, we’re going to avoid any direct spoilers as best we can while still discussing some of the story and context. After all, the story is probably the best thing about Confession despite some of its issues. If you’re someone who’s easily offended, this film may not be for you. Though, if you keep an open mind, there’s a lot to interpret, ponder over, and discuss when it comes to the film’s assessment of faith and how it can be followed so blindly. Again, this is sure to rub some people the wrong way but Nyiri’s script never gets too preachy or tries to sway viewers into a specific mindset or belief. It merely poses questions that challenge the characters and the audience. The overall storytelling and intellectual aspect of the film is, if nothing else, intriguing even if it sometimes feels a bit long winded. 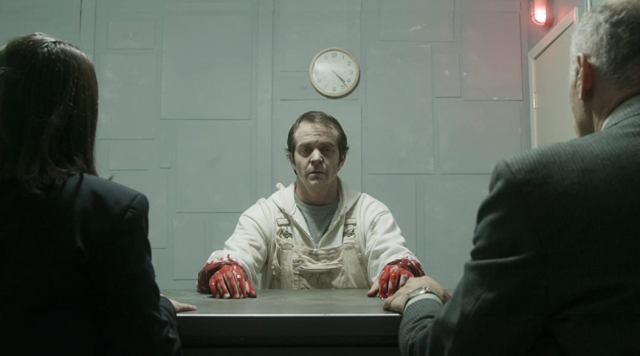 What really sells the film’s discussions about beliefs, faith, and religion is the film’s cast. Specifically, Gavin Lyall gives his all to the role of Dean McCallum. Lyall is essentially Confession‘s Hannibal Lecter as he waxes intellectual with both Lamb and Herrera. While maybe not the powerhouse performance the caliber of someone like Anthony Hopkins, Lyall is the star of the film and commands the screen every time he’s featured. With so much dialogue and some dense verbiage at times, Lyall never really feels as if he’s just reading a script either. His performance is natural and causes the audience to hang on his every word and revelation. There are a few instances where he must portray the “real” Dean McCallum and he seamlessly bounces back and forth between that and his more sinister self as well. Gary C. Stillman is also pretty good as Lamb. He mainly serves as the vehicle for which the audience experiences the story which makes sense given Lyall’s abundant screen time. Much of the cast is made up of unpolished talent but no one is necessarily bad or stands out for a poor performance.

Admittedly though, Confession is a low budget, independent affair and it’s often saddled with many of the issues that plague indie cinema. To his credit, Nyiri goes big with his feature length debut despite not having the funds to fully realize some of the film’s more spectacular moments. While refusing to sacrifice vision because of budget constraints is certainly commendable, the film does suffer in other aspects because of it. Most of the shots look pretty good but there’s a lower quality aesthetic to the overall look of the film. There are a handful of iffy special effects used that may take some viewers out of the film. They’re able to convey a message but don’t look especially great while doing so. Additionally, there are a ton of sets throughout Confession which is surprising but some of them feel like sets while watching the film. These aren’t necessarily backbreaking issues but they do showcase some of Confession‘s limitations. On an unrelated note, there are some minor audio “glitches” during some early scenes in the film that are quite jarring also. 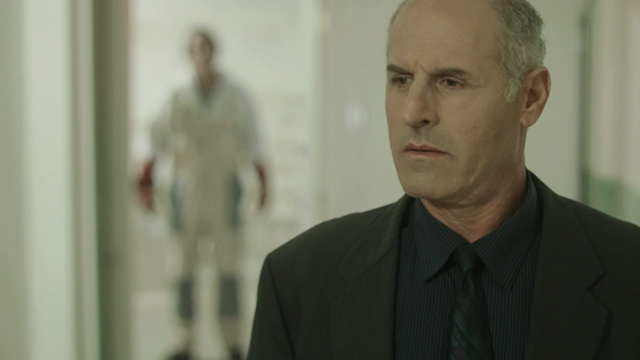 One of the biggest issues with the film, though, is its length. At 118 minutes, Confession isn’t overly long but it does seem to go in circles quite often. The film doesn’t necessarily feel long but it maybe doesn’t have enough content to fill its nearly two hour runtime without being redundant in spots. There were a handful of moments where you could tune out for a few minutes before coming back and realizing that you hadn’t really missed anything. As previously mentioned, the audience is clued in on who/what McCallum is early enough so that the story lacks a revelatory moment where you finally realize what’s happening. With its wordy, yet still interesting, script, viewers are told most of the story as opposed to actually viewing it onscreen.

While Daniel C. Nyiri’s feature length debut has issues, it’s a passion project that seemingly overcame many hurdles during its production. Though sometimes flawed, its bold script and the vision of its director makes it hard to get down on Confession. It’s still a film that viewers can sink their teeth into and discuss after the credits roll. The cast and crew deserve a ton of credit for bringing this micro-budget production to life and, hopefully, Nyiri gets more opportunities in the future due to his “go-big-or-go-home” approach. Confession may not be everyone’s cup of tea but comes recommended for anyone looking for an open discussion on beliefs and faith.

*Confession is currently available for streaming on Amazon for Prime members.*