As all fans of cinema should know by now, movie trailers can be deceiving. After all, they’re created to sell potential viewers on the movie. While it’s always good to be a bit skeptical of a quality trailer, it’s hard not to hope for the best. Over the past few months, Sofia Coppola’s newest film, The Beguiled, had some pretty great trailers that boosted the film up into one of our most anticipated of the year. Lo and behold, we were somewhat swindled by quality trailers. Though The Beguiled is actually a pretty solid film, it isn’t quite as advertised which is mildly disappointing.

The film is an adaptation of Thomas Cullinan’s 1966 novel, A Painted Devil. It’s also a remake of the 1971 Clint Eastwood film of the same name. The Eastwood adaptation was not a box office success as it was released right before his breakout role in Dirty Harry and it seemed that Universal Studios was unsure how to market it. Over the years, the film has developed an audience and is actually well regarded.

In the 2017 version, Colin Farrell stars as Corporal John McBurney, a Union soldier who’s injured during the American Civil War. A young girl, Amy (Oona Laurence), from an all-girl boarding school in Virginia discovers him and escorts him back to the school. From here, the other females from the school take a liking to John and all seek his affection in some way or another. Among them are a teacher, Edwina Morrow (Kirsten Dunst), Alicia (Elle Fanning), and the proprietor of the school, Miss Martha (Nicole Kidman). Other than Jane (Angourie Rice), even the younger girls are smitten with the corporal. Over the course of the film, they each develop connections with John and things begin to spin out of control.

From the look of the first trailer, The Beguiled seemed as if it would be a dark and potentially brutal experience. Jealousy and rage were sure to run rampant as the female inhabitants pined for the lone male trapped in their school. The trailers additionally made Colin Farrell’s John look like the victim. While he mostly is, a lot of what happens in the film is still of his own doing as he uses each of the women to benefit himself. It’s harder not to sympathize with the women most of the time. You can understand why they’re attracted to John as he woos each of them individually. 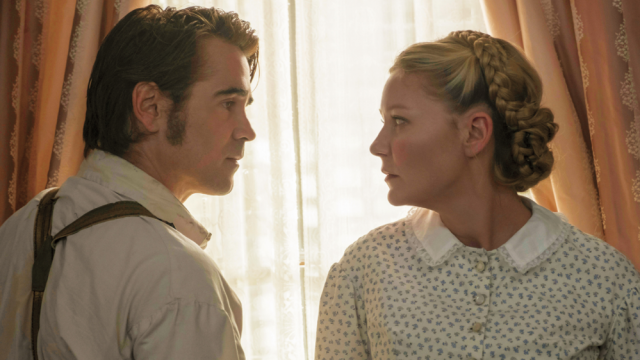 Before we get into the most disappointing aspect of the film, we’ll address some of the positives first. First of all, the cast is excellent. Farrell gives a great performance as Corporal John McBurney. Initially, he seems like a nice guy but he becomes progressively more unhinged as the film continues. Each of the women are great in their roles as well. They all have their own personalities that set them apart from each other. Even the ways that they attract John are unique to each of them. Edwina is timid yet beautiful which John latches onto immediately. Alicia uses the power of seduction and sexuality while Miss Martha’s strength and intellect are often on display.

The tone of The Beguiled is also one of its biggest selling points. While it’s not as ghastly as it maybe could’ve been, it’s definitely an uncomfortable watch. All of the females begin to notice irregularities with one another as they try to seduce John. Even something as subtle as wearing a special piece of jewelry to capture his eye is noticed by the others. You simply never know when everything is going to fall apart. It makes for a tense and hostile situation as the women try to one-up the others. All the while, John is being kept in his room for any one of them to take advantage. 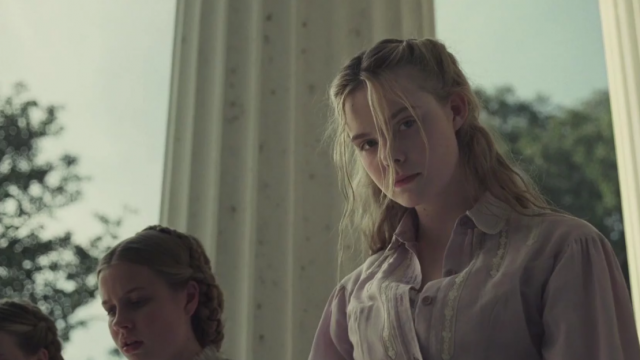 Once again, The Beguiled is still a very good film despite being a little different than what the trailers depicted. The biggest problem with the film in general is its runtime. Even though it’s deliberately paced with a slow, gradual buildup, it just doesn’t feel long enough. With the level of talent in the film and the amount of twists and turns the story could take, 93 minutes feels too short. John quickly builds relationships with each of the other characters and then you’re thrown almost immediately into the climax. A more calculated plan for John to get into the minds of each of the women before receiving a just punishment could’ve gone a long way to up the suspense and make for the more vicious experience alluded to in the trailers.

When all is said and done, Sofia Coppola has proven again that she is a fine and capable filmmaker. Like her other films, The Beguiled boasts a style and elegance along with a hint of mystery. Upon the first viewing, you don’t know where the story will go or who will strike first among the women. Colin Farrell does a good job going from being likable to sadistic to deranged throughout the course of the film. After being slightly disappointed the first time, it will be interesting to watch the film again without expectations. While The Beguiled may not entirely be as advertised, it’s a stark southern thriller that’s definitely worth your time.