With a brand new year comes a whole slate of new films. After such a strong end to an overwhelmingly bland 2019, you’d hope that the good times would continue rolling. Unfortunately though, January is typically a dead zone for quality filmmaking. While the first month of 2020 actually does have more intriguing titles set for release than in years past, this January gets off to an especially poor start with the reboot/sequel/whatever you want to call it of The Grudge.

Some of you may have actually forgotten about this franchise as it has remained mostly dormant in the United States for the past ten years. The franchise got its start in 1998 with two short films, Katsumi and 4444444444, from writer/director Takashi Shimizu. Two direct-to-video features were then released before the theatrical Japanese sequel, Ju-On: The Grudge, was released in 2002. A sequel to that film followed in 2003 and an American remake hit theaters in 2004 following the success of another J-horror remake in 2002’s The Ring.

The American film spawned its own string of sequels with The Grudge 2 in 2006 and The Grudge 3 in 2009. Oddly enough, series creator Takashi Shimizu wrote and directed the shorts, the two direct-to-video films, the Japanese theatrical feature, its sequel, the 2004 remake, and the remake’s sequel before handing over the reins to other filmmakers. To date, there have been thirteen total Grudge releases complete with a crossover film featuring Sadako from Ringu AKA The Ring. Throughout the franchise’s history, the general premise is that a curse is born when someone dies with a deep and powerful rage. The curse gathers in the place where the person has died and haunts others who may come across it.

The 2020 version of The Grudge is told in a non-chronological order as it jumps back and forth through the mid-2000’s. It opens with live-in nurse Fiona Landers (Tara Westwood) leaving a house in Tokyo, Japan before heading back to her home in Pennsylvania with an unwanted curse that attaches itself to her. We jump forward in time to follow Detective Muldoon (Andrea Riseborough) who discovers a corpse in a car in the woods. Muldoon and her partner, Detective Goodman (Demián Bichir), track the body back to the Landers house. This upsets Goodman but Muldoon decides to visit the house at 44 Reyburn Drive which was most recently the home to Faith (Lin Shaye) and William (Frankie Faison) Matheson. The film jumps to one other time period in which realtors Peter (John Cho) and Nina Spencer (Betty Gilpin) attempt to sell the house at Reyburn Drive. 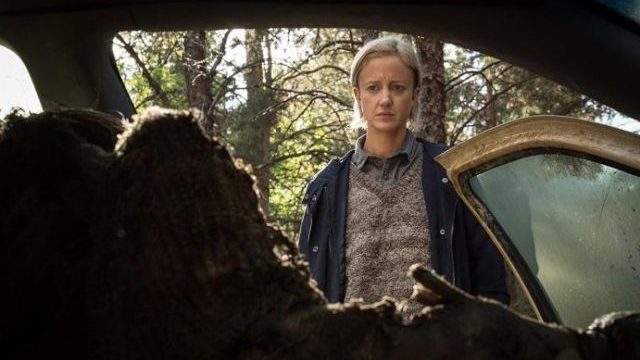 We’re just going to cut the plot short here as you probably get the drill. The majority of the film is spent jumping between the different characters and time periods trying to draw them all into one cohesive narrative. This film is simply unable to do what it sets out to accomplish. Just by reading the plot, you become disoriented and probably can’t figure out who you’re actually supposed to root for. It takes an approach similar to films like Crash or Babel with many characters that ultimately come together somehow by the film’s end. Though, there’s really never a big pay off for any of the characters. What it really comes down to is watching people do stuff. None of the stuff really matters and there’s nothing that’s the least bit interesting.

This is especially sad considering the fact that The Grudge is a horror film. Sure, it’s common for there to be uninteresting or one dimensional characters in horror. However, you should always have the scares to look forward to. In the sake of this film, there really aren’t any legitimate scares. There are plenty of jump scares but they’re all ineffective because you see them coming from a mile away. They usually consist of a sudden appearance of a ghost and/or a loud noise. Again though, they’re all so predictable that they hardly qualify as scares in general. On top of that, the ghosts rarely do anything in terms of trying to harm anyone. They appear and then the scene ends.

Frankly, the scariest thing about The Grudge is how poor the film’s editing is. The constant jumps in time, the lack of anything remotely surprising, and the inconsistent pacing are all products of the horrendous editing by Ken Blackwell and Gardner Gould. While it’s true that the two didn’t have a lot to work with given the film’s garbage story, they still need to be held accountable. There are scenes in which something scary is supposed to happen followed by scenes of the characters just doing nothing. Then, there are other little things like Andrea Riseborough’s Muldoon saying she doesn’t smoke before sitting outside smoking a cigarette only a few scenes later. Everything about this film is such a mess and there’s zero consistency to anything that’s occurring onscreen. 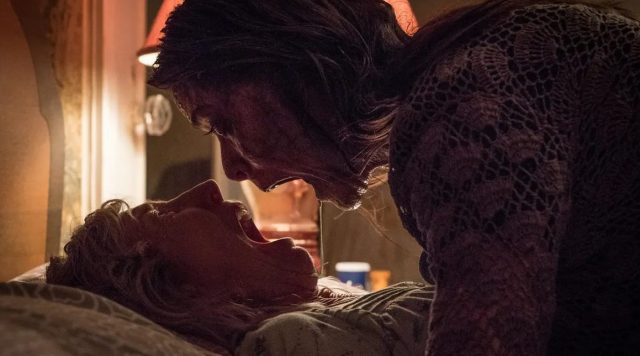 The only noteworthy thing about The Grudge is its cast. No, we’re not talking about the performances either. The names attached to this film only stand out because of how much better they’ve been in other films. Andrea Riseborough starred opposite Nicolas Cage in the highly regarded horror acid trip, Mandy, and Lin Shaye has carved out a nice spot for herself as the star of the Insidious franchise. John Cho was excellent in 2018’s Searching while Betty Gilpin has become a favorite on Netflix’s ladies wrestling dramedy GLOW. William Sadler has enjoyed a lengthy Hollywood career with some memorable roles while both Jacki Weaver and Demián Bichir are past Oscar nominees. For the amount of talent in this cast, there’s no excuse for The Grudge to be this bad.

There’s nothing else to say about this 2020 installment of the franchise. It’s certainly not scary or even slightly disturbing. Instead, it’s bland, unimaginative, and painfully boring. By the time you’re thirty minutes into the film, you find yourself wondering if there’s ever going to be a story to follow or anything worth paying attention to. You feel every bit of its 94 minute runtime crawl by at a snail’s pace. Something must’ve went wrong during the making of this film for it to turn out like this. Again, there’s far too much talent here to deliver this product. Needless to say, stay far away from The Grudge 2020. This film is a curse in itself and it’s one that no one deserves.