In the late 1980’s and early 1990’s, the Teenage Mutant Ninja Turtles were king. Starting out as a single issue comic book, creators Kevin Eastman and Peter Laird turned a silly idea into a cultural juggernaut. Of course, most people identify the characters with the Teenage Mutant Ninja Turtles cartoon from this time period. However, there have also been six feature films, countless comics and toys, and basically everything under the sun that merchandisers have been able to to plaster the faces of these iconic characters with. Let’s not forget though, that this whole thing started with the idea of four turtles, named after Italian Renaissance painters, mutating after coming into contact with some mysterious ooze and learning ninjutsu from their rat sensei. This is the main subject of discussion in Vin Nucatola’s charming short film, Italian Turtles.

The film serves as a sort of fly-on-the-wall look at how the original pitch meeting for the Teenage Mutant Ninja Turtles TV show may have gone down. The film opens with two artists, Kevin (Nick Piacente) and Peter (Chris D’Amato), sitting in a board room worrying about how to present their creation. Kevin appears confident while Peter believes the executives will laugh them out of the room. They begin an absurd pitch for a show based on their comic book characters, the ninja turtles. The three executives, John Handy (Timothy J. Cox), Karl (Bj Gruber), and Pat (Janel Koloski), are somewhat taken aback by the complexities of Leonardo, Donatello, Raphael, and Michelangelo, but are intrigued nonetheless. Though, they believe that there’s a missing X-factor when it comes to marketing towards children.

The bulk of the film’s entertainment comes from how ridiculous the Teenage Mutant Ninja Turtles are. As Kevin and Peter explain the premise of their comic book, the executives ask very logical questions. Yet, the creators continue to add new wrinkles to the characters that don’t exactly make sense but are fascinating nonetheless. Vin Nucatola’s script doesn’t embellish anything when it comes to the core ideas behind the intellectual property either. Kevin and Peter respond to each question with straight faces as if their reasoning should be obvious as to why/how the turtles are who they are. For those who have watched the original cartoon as children, it’s quite funny to hear how ludicrous the concept is within the confines of this film. It’s something that you maybe never thought of but hearing it out loud makes you think twice about the absurdity of anthropomorphic turtle teenagers who fight crime  and eat pizza. 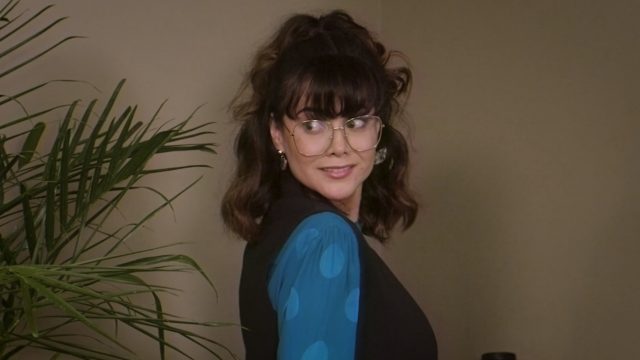 Much of the film’s success in telling its story can be attributed to the cast. Nick Piacente and Chris D’Amato aren’t meant to be taken seriously with the former in an obvious fake wig and mustache and the latter looking eerily similar to George Costanza. Though, both are excellent and fit the tone of the film as they pitch their show idea. Timothy J. Cox, as always, is a standout. One of the best parts of the film is his rundown of Kevin and Peter’s entire pitch. His delivery is humorous and basically sums up the absurdity of the turtles themselves. Bj Gruber and Janel Koloski, as Karl and Pat respectively, bounce off of Cox’s John Handy and provide more chuckles for viewers with their reactions.

Italian Turtles is definitely a film that will be much more appreciated if you have a working knowledge of the turtles and their beginnings. Obviously, the characters of Kevin and Peter are based on the real-life creators of the comic book while John Handy was the Senior Vice President of Product Design for Mattel. However, Handy did have a brief stint for Playmates Toys in which he was largely responsible for the line of Teenage Mutant Ninja Turtles action figures. Additionally, the Internet Movie Database (IMDb) lists Gruber’s character as Karl Aaronian, the Senior Vice President of Marketing for Playmates. These are fun little Easter eggs that show Vin Nucatola’s appreciation and love for the subject of his short film. The three executives, along with the secretary, played by Mary Ortega, even look similar to the Channel 6 News team from the cartoon. This may be coincidental but, given Nucatola’s attention to real-life details, it’s safe to assume that he wanted to pay homage to other Turtles characters like Burne Thompson, Vernon Fenwick, Irma, and, of course, April O’Neil. 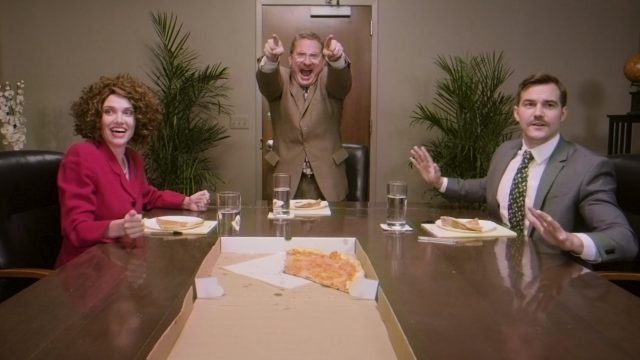 While Italian Turtles is a lighthearted take on a potentially real encounter, its target audience is mainly going to be fans of the Teenage Mutant Ninja Turtles. If you’ve never heard of them before or aren’t familiar with the details, this film may not resonate as much. Its key demographic is probably going to be adults between the ages of 30 and 40 who are nostalgic for the old cartoon. This isn’t a bad thing as people who fit this niche should really appreciate Nucatola’s work. However, some of the film’s charm may be lost on others who aren’t familiar with the show, comics, or characters.

For those that fall into the target audience, Italian Turtles is ridiculously entertaining. It provides a sobering look at something so near and dear to some people’s hearts but still celebrates it. Yes, the concept of Ninja Turtles makes no sense but it didn’t matter back in the late 80’s/early 90’s. The turtles were simply the best. Watching this film may even prompt you to go watch the show/movies or read the comics and relive some of that nostalgia. For that alone, Vin Nucatola and his delightful cast deserve a ton of credit for reminding viewers of the Teenage Mutant Ninja Turtles phenomenon in such an amusing and thoughtful way.