It was only a few years ago that Universal Pictures announced that they’d be rebooting all of their classic monsters into one shared universe. The aptly titled Dark Universe was set to officially launch with the release of 2017’s Tom Cruise-led bomb, The Mummy. After the critical and commercial failure of that film and the retroactive inclusion of 2014’s Dracula Untold, the Dark Universe couldn’t have been off to a worse start. Future films, including 2019’s proposed Bride of Frankenstein, as well as announced cast members like Johnny Depp and Javier Bardem were abandoned and the Dark Universe was quickly chalked up as a failure. Luckily for fans though, it appears that Universal hasn’t completely given up on the idea of rebooting their monster films of the 1930’s and 1940’s. Instead, the studio is looking to make standalone films based on the characters. The first of this new direction is Leigh Whannell’s very solid, if unfaithful, adaptation of The Invisible Man.

The film is based on H.G. Wells’ 1897 novel of the same name. To date, the character of the Invisible Man has had a storied history. Variations have appeared in numerous film and television shows with his initial appearance being in James Whale’s 1933 film starring Claude Rains. Whale’s The Invisible Man is a spectacle even today with its intricate use of wires and matte process special effects. It’s also probably the most faithful adaptation to the Wells novel as it follows Dr. Jack Griffin who makes a serum to become invisible. In the film, he’s driven mad by the serum and becomes homicidal. There were a number of spin-offs that had little to do with the Wells novel or the 1933 film including The Invisible Man Returns, Invisible Agent, The Invisible Man’s Revenge, and even the 1940 comedy The Invisible Woman. The character also appeared in the obligatory Abbott and Costello Meet the Invisible Man which was standard for the Universal monsters in the 40’s and 50’s. In 2000, perhaps the most infamous adaptation of the story was released in the form of Paul Verhoeven’s poorly received Hollow Man.

Whannell’s new film opens with Cecilia Kass (Elisabeth Moss) attempting to flee from her abusive relationship with wealthy tech mogul, Adrian Griffin (Oliver Jackson-Cohen). Cecilia drugs Adrian and barely escapes after he wakes  with help from her sister, Emily (Harriet Dyer). She stays with her police detective friend, James (Aldis Hodge), and his daughter, Sydney (Storm Reid), while remaining hidden from Adrian. Two weeks later, Cecilia’s informed by her sister that Adrian committed suicide. In the wake of his death, Adrian leaves Cecilia a total of $5 million which is handled by Adrian’s lawyer and brother, Tom (Michael Dorman). However, strange occurrences start to happen around Cecilia who believes that Adrian has found a way to become invisible and is still stalking her.

The plot of 2020’s The Invisible Man is somewhat tough to judge. On one hand, it’s an intriguing story of a battered woman and the psychological damage that remains from a bad relationship. At times, the film can be an aggravating watch as Cecilia knows that Adrian still exists but is unable to prove it to those around her. This is both good and bad as you sympathize with her efforts but also feel like there are other ways she could go about successfully outing her attacker. On the other hand, the story of this film isn’t really The Invisible Man. It has little to do with the Wells novel and 1933 film as both of them have Dr. Griffin at the forefront. What made the original film so great is that viewers are meant to follow Griffin on his descent into madness as his homicidal tendencies are a side effect of the serum. The 2020 film mostly contains many ideas that we’ve seen before in films like 2002’s Enough instead of trying something a little more bold.

That being said, this new adaptation of the classic Wells story is still a very good horror film. Much of this has to do with the talented cast. Oliver Jackson-Cohen only appears briefly as Adrian but is convincing as the ticking time bomb he’s said to be. Supporting characters like Harriet Dyer’s Emily and Storm Reid’s Sydney show support for Cecilia but often end up as collateral damage from Adrian’s wrath. Aldis Hodge is very charismatic and likable as James as well. James, Sydney, and Cecilia quickly develop a family dynamic that becomes the emotional crux of the film. James is also put in a tough spot as he questions Cecilia’s mental state after the supposed death of Adrian and the torment that she goes through. Of course, Elisabeth Moss is the star here though. After turns as the timid, yet strong willed, Offred/June in the popular Hulu series, The Handmaid’s Tale, and the psychotic, drug addled Becky Something in last year’s Her Smell, Moss portrays Cecilia as somewhere in the middle of those two performances. She’s being driven insane by what’s happening to her but she also never loses sight of how to expose Adrian either.

As was the case with the lackluster Hollow Man, it would’ve been easy for a filmmaker to make a run of the mill slasher flick out of this version of The Invisible Man. Luckily, Leigh Whannell is not that filmmaker. Since his emergence with 2004’s Saw, Whannell has proven himself as a talent many times over. He was credited as a writer on the first three Saw films which suffered an alarming drop in quality after the initial trilogy. Then, he was responsible for writing each installment of the Insidious franchise and he also handled directorial duties on Insidious: Chapter 3. Yet, it wasn’t until 2018’s Upgrade that Whannell really found his stride as a filmmaker. That film perfectly blended horror, action, and science fiction into a stellar piece of cinema. His talents don’t go to waste on The Invisible Man which, like Upgrade, tries to blend genres. This time, it’s horror, mystery, and drama. He takes the subject matter seriously and the film is never hokey or over the top. While Saw co-creator James Wan often gets most of the accolades, it’s Whannell who has begun to prove himself as maybe the more talented and creative of the two. 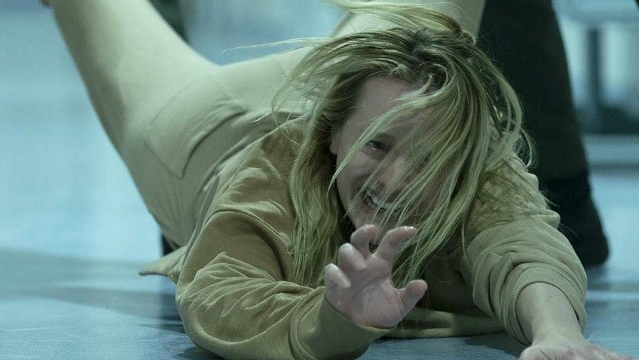 Now, the film isn’t perfect nor is it anywhere near as original as Upgrade. Sadly, a lot of this has to do with the overall execution. While the effects and scares are very good throughout the entire film, it feels like Whannell and company just didn’t take the idea far enough. Even from the first trailers that came out, audiences knew exactly what they were going to get from The Invisible Man. It’s too bad that there wasn’t more subtlety and mystery behind Adrian. Instead of basically telling us that he’s there, the film could’ve taken an approach almost like the original Child’s Play where you didn’t really know if the Chucky doll was alive or not. In this case, is Adrian still alive and invisible or is Cecilia keeping him alive only in her mind? The film does toy with this idea through dialogue but not as much visually. We’ve already established that this film version has very little to do with the original novel. In that case, why not try to make something a little more mind bending and different? Again, it just felt like you already knew what was going to happen in this film before even seeing it.

Still, Leigh Whannell’s The Invisible Man is a wholly entertaining and competently made interpretation. No, it’s not really the same Invisible Man as many have come to know but the talents of the cast and crew keep its head above water. There are some cool effects and legitimate thrills and jump scares throughout the film that should satisfy horror fans. Sure, there could be more mystery and fear of the unknown but what’s here is effective and well done. People looking for a faithful adaptation of the H.G. Wells novel are best to stick with the 1933 version. Here in 2020 though, The Invisible Man is a rock solid horror film in a sea of pretenders.